The question now, as the last round of nominating contests comes into focus, is simple – and for parts of the party establishment, terrifying: Who’s next?

Among progressive groups like the Justice Democrats, one of Ocasio-Cortez’s earliest backers, there is a sense that her victory could inspire voters, donors and volunteers to give other insurgent challengers a second look.

“There are pivot points, moment when things change, when they just click,” said Corbin Trent, the Justice Democrats executive director and communications boss for the Ocasio-Cortez campaign. “This win – if we do the work we have to do – I think this win will be exactly that.”

In New York, where federal and statewide primaries are separated by more than two months, the focus on the left is now squarely on Cynthia Nixon’s bid to deny Gov. Andrew Cuomo a third term. The most recent polling shows Cuomo with a commanding lead, but Nixon – who exchanged endorsements with Ocasio-Cortez – will take heart from Tuesday night’s results.

Here are four more candidates, each working against the odds, worth watching in the coming weeks and months.

A huge congrats to @Ocasio2018 for your victory tonight! You proved that when we stand up for what we believe in, we win. This is about more than one campaign or election. This is a movement. Together, we will change the world. Congratulations! #ChangeCantWait #Ocasio2018 pic.twitter.com/imORpc1jST

Hours after her victory, Ocasio-Cortez had an answer for Democrats wondering who the next progressive challenger to take down an incumbent member of Congress could be: Ayanna Pressley, who is running against Rep. Michael Capuano in the September 4 primary.

“Vote her in next, Massachusetts,” Ocasio-Cortez tweeted.

Pressley, unlike first-time candidate Ocasio-Cortez, is a known quantity. She was the first black woman ever elected to Boston’s city council.

But the two got to know each other over the course of their campaigns over meetings, texts and phone calls. Pressley sent one of her field organizers to work on Ocasio-Cortez’s race. And Pressley told CNN that the two show that progressives aren’t giving members of Congress credit in the Trump era when they “simply vote ‘no’ like a robot and go home.”

“I think we are both stating that voting the right way isn’t enough. We have to be bold, we have to be disruptive,” Pressley said. “Both of our candidacies are disruptive because they challenge the conventional wisdom and narrative about who has a right to run and also how to run and win. … People closest to the pain should be closest to the power.”

This weekend I met voters in Cummington, Plainfield & Worthington. I ended the weekend in South Hadley & Brookfield. I believe democracy is for everyone & not just the elite. I will advance policies that uplift our hardworking families. I want us to thrive together. #Mapoli pic.twitter.com/KRQJ2DBHiG

In western Massachusetts, Tahirah Amatul-Wadud – a Muslim, African-American civil rights lawyer – is challenging Rep. Richard Neal, the top-ranking Democrat on the House Ways and Means Committee who was first elected in 1988.

Her platform includes support for single-payer health insurance, and – like Ocasio-Cortez did against Crowley – she is hammering Neal for taking corporate money.

Neal, meanwhile, is another lawmaker who could be caught off guard: In mid-June he questioned the “seriousness of purpose” of Amatul-Wadud’s campaign.

September 4 will be a key day for the progressive insurgency. Brianna Wu, a computer programmer, is also running in the Democratic primary against Massachusetts Rep. Stephen Lynch. 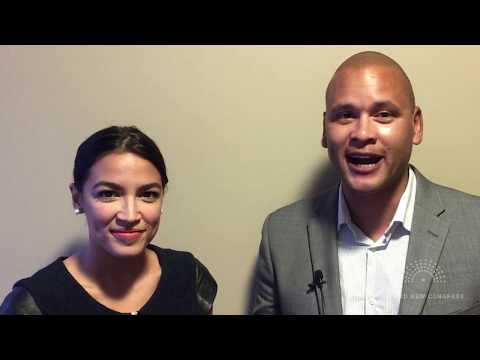 Ocasio-Cortez used her rising profile to tout Richardson’s campaign – among others, like Pressley – on Twitter this week. But she and Richardson go back further than that. They were among the first candidates to carry the Justice Democrats banner.

“When Chardo and I are elected,” Ocasio-Cortez said in a video clip they featured in together last year, “we’re going to work together to expand those opportunities (for Dreamers), to make America a place for everyone.”

In an interview with the Orlando Sentinel after the New York primary, Richardson, whose race CNN cited as one to watch back in October 2017, touted his political ally’s shock win as a sign the dam had finally broken.

“People are finally ready for change. They’re ready to stop corporations from controlling legislation,” he told the Sentinel. “If anybody had the ability to win, it was her. And I’m feeling the same here.”

Michigan was the site of Sen. Bernie Sanders’ most remarkable 2016 victory, a come-from-way-behind win over Hillary Clinton that pumped life, for a time, into his campaign and made the state a focal point for national progressives.

Abdul El-Sayed, a 33-year-old doctor who previously worked as Detroit’s health commissioner, has attracted a handful of Sanders 2016 alums to his campaign. In January, activist and supporter Linda Sarsour called him “our younger version of Bernie.”

Talking to CNN’s Chris Cuomo on Wednesday night about the future of the Democratic party, El-Sayed pushed a harder line against big business interests.

“We’ve got to find our core,” he said. “At our core we’ve always been a party about people – how we empower people against big corporations and against the exploitation we’ve seen for a long time.”

Polls suggest El-Sayed faces an uphill fight ahead of the state’s August 7 primary. Gretchen Whitmer, a former state Senate minority leader, is the favorite and millionaire Shri Thanedar has also sought to promote himself as a progressive alternative.

But El-Sayed has been methodically building his case and, along the way, grabbing the attention of progressive groups with pitches to make internet available to everyone in Michigan with his “MI-Fi” plan, a new clean water policy and his detailed “Medicare-for-all” proposal that, speaking to Bloomberg, Larry Levitt from the nonpartisan Kaiser Family Foundation called “a serious plan (that’s) upfront about the tax increase required, which is often just an asterisk in single payer proposals.”