A fire raging in northern England has prompted the evacuation of dozens of homes and forced firefighters to work in “tremendously difficult conditions”.

The fire is sweeping across the Saddleworth Moor, a hilly area that rises up to 1,312 feet northeast of Manchester. The blaze has already destroyed 2,000 acres of moorland, according to a Facebook post by the Greater Manchester Police’s Saddleworth Division.

On Tuesday night, 34 households were evacuated in the Calico Crescent area, to the west of the moorland.

“This fire is particularly large. We’ve got lots of experience with dealing with moor fires but this particular incident is vast,” said Leon Parker, the assistant chief fire officer for the Greater Manchester Fire and Rescue Service (GMFRS).

The fire, which began on June 24, was initially suppressed, but an ongoing heatwave in Britain helped reignite the blaze the next day. There are currently 50 firefighters working to contain the blaze, which is now 6 kilometers wide.

Around 65,000 gallons of water have already been dropped on the fire, as firefighters worked through the night on Tuesday to contain the flames.

Read: Do you need to worry about wildfire smoke? 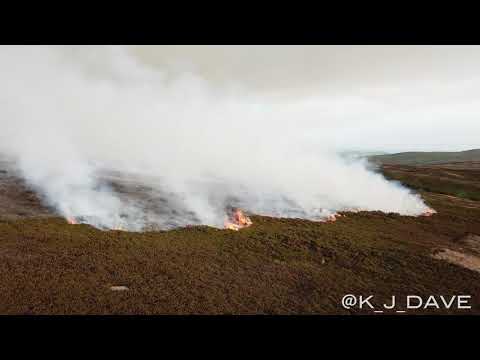 “The plan today is to try and really, really put some resource on the scene and put a heavy attack on this fire, and if that needs military assistance then that’s what we’ll consider,” said Parker at a press conference on Wednesday.

The GMFRS said the fire is “unprecedented in recent times and has been devastating to the moorland and the wildlife that live there”, according to the UK Press Association.

On Wednesday morning, the sun struggled to penetrate the dense clouds of smoke wreathing the surrounding towns, and ash could be seen falling to the ground.