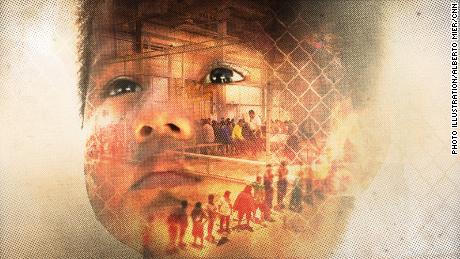 Actually, the US has a long history of separating families

(CNN)Many Americans across the US are angry with President Donald Trump for his "zero tolerance" immigration policy, which has sought to deter illegal entry by detaining and separating migrant families.

Critics say the policy, which was recently altered to address some concerns of separation, is not emblematic of who we are as a nation. Others say it runs counter to the America they know and love.
But history shows policies like this have been implemented time and time again since the nation began.
In fact, the US has a long history of separating children from their parents. Government policies forced apart the families of enslaved Africans, Native Americans and Mexican immigrants, and detained Japanese-Americans during World War II.

Read More
Enslaved parents lived with the constant fear of being separated from their children.
Slave owners could split up families for any number of reasons -- including selling slaves to pay off debts, dividing families to create equal inheritance or as punishment.
Heather Williams, a professor of Africana studies at the University of Pennsylvania, said the emotional reports of parents and children separated at the US-Mexico border echo the pain and anguish enslaved parents went through.
Williams recalled accounts of mothers begging slave traders to let them keep their children. She described an instance in which an enslaved child who had been separated from his parents would not stop crying, much like the eight-minute audio of the sobbing immigrant children.
"When I hear the voices of those children, it absolutely resonates because that's how I imagine it was with the people that I study," Williams said.
The sounds of separation -- how 8 minutes of audio changed the immigration debate
After the Civil War ended, formerly enslaved people were left to find family members they might not have seen in years. Thousands of ads were placed in black newspapers in an effort to reunite families, but finding those relatives sometimes proved to be an impossible task.
"During slavery, there was a belief among slave owners that these families could be ripped apart and there was no need to think about how they ever might be brought back together," said Henry Fernandez, a senior fellow at the Center for American Progress.
Likening the separation of black families to migrant families, Fernandez said: "What we're seeing here is a federal government which had no strategy to ever bring these families back together."
After Trump signed an executive order on Wednesday to stop migrant parents from being separated from their children, it took days before the administration had a plan to reunite families. The plan, released Saturday, indicates that it could be a long time before those children make it back to their parents.

In the 19th century, the US government began a campaign to assimilate Native American children into white American society by separating them from their families and stripping them of their language and culture.
In 1819, Congress passed the Civilization Fund Act, which provided religious organizations the resources to run schools for Native American children "for introducing among them the habits and arts of civilization."
Sixty years later, Capt. Richard Henry Pratt founded the first Indian boarding school in Carlisle, Pennsylvania. Native American children were taken from their parents and communities and forced to attend similar institutions that aimed to "kill the Indian, and save the man," as Pratt famously said.
Native American girls from the Omaha tribe at Carlisle School, Pennsylvania.
The government boarding schools were run like military training camps, where children were subject to abuse, neglect and corporal punishment.
Later, in 1902, a government order declared that the long hair worn by Native American children was impeding "the advancement they are making in civilization." That order mandated that children cut their hair and prohibited customs like body painting, dances and traditional clothing.
It took until 1978 for Congress to pass the Indian Child Welfare Act, which gave tribal governments a stronger voice in child custody issues.
Handcuffs, assaults, and drugs called 'vitamins': Children allege grave abuse at migrant detention facilities
Clifford Trafzer, a history professor at the University of California, Riverside, worries that migrant children separated from their families and housed in detention centers and with foster families could similarly lose their culture.
"These children are being reprogrammed," Trafzer said. "They say, 'We're giving them education.' Well my goodness, they can't speak English."

The removal of Mexican immigrants

During the Great Depression, a wave of anti-Mexican hysteria swept parts of the nation. Federal and local authorities rounded up large numbers of Mexican immigrants and Mexican-Americans, forcing them to leave their homes on the Arizona, California and Texas borders and relocate to Mexico.
Many Americans at the time blamed Mexican communities for taking away jobs and public assistance resources from them. That may have been the 1930s, but that justification is not too far off from Trump suggesting that immigration hurts American workers.
This period in history is often referred to as the Mexican Repatriation. But that term suggests those who left were returning voluntarily to their native country.
In fact, an estimated 60% of those who were pushed out were US citizens, Francisco Balderrama and Raymond Rodriguez wrote in their book "Decade of Betrayal: Mexican Repatriation in the 1930s." Facing threats of unemployment and the loss of social assistance, the families who packed up their bags often felt like they had no other choice but to leave.
Another consequence of the deportations?
Some families were separated.
When the children in a family were US citizens and the parents weren't, things got messy, Balderrama said in an interview with NPR. One parent might choose to leave under the pressure of deportations happening around them, while the spouse might choose to stay in the United States with their children, who were often citizens.