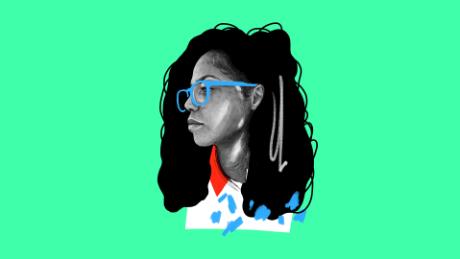 Sara Elhassan: In Sudan, the #JusticeForNoura campaign gave a voice to the voiceless

By Sara Elhassan for CNN
Illustration by Jordan Andrew Carter

Sara Elhassan is a 33-year-old Sudanese-American freelance writer and editor based between Phoenix, Arizona and Khartoum, Sudan. Her Instagram story on Noura Hussein helped spark the #JusticeForNoura campaign. The views expressed in this commentary her own.
On May 1, I turned on my phone, opened my Instagram account and shared Noura Hussein's story.
While her case was just starting to spread on WhatsApp groups among the Sudanese diaspora, it was the first time that many of my friends, family and followers had ever heard about Noura, the Sudanese teenager on death row for killing her husband, who she says raped her after their forced marriage.
But in the weeks since, her case has sparked international outrage, human rights campaigns and several hashtags, including #JusticeforNoura.
Read more: Teen who killed rapist husband shares her story
Read More
When I found out about Noura's case through WhatsApp, it had been almost a year since her arrest, and a day since she was convicted of premeditated murder.

What made Noura's story so unusual was that she had killed her attacker.

Sharing Noura's story on Instagram was a reflex, a coping mechanism to deal with the intense frustration I felt -- not only at the great injustice that this young woman had faced at the hands of her family and the Sudanese justice system, but also that such a major case had flown under our collective radar
What made Noura's story so unusual was that she had killed her attacker.
But the circumstances that led to this chain of events -- child marriage, forced marriage, marital rape -- are neither new nor uncommon in Sudan, where more than a third of girls are married before their 18th birthday, according to UNICEF.
Discussing Noura's case with people thousands of miles away was a way for me to engage with an issue I felt was in need of immediate attention. It was also a way to acknowledge the countless number of women across Sudan and the diaspora, those I knew personally and those I didn't, who had suffered similar fates and to whom society had turned a blind eye.
As with most of the Instagram stories I create, I had hoped that this would prompt people to engage with their friends and families on this issue. But the reach it garnered, the outpouring of support and the flood of messages I received defied my expectations.
Read more: The 11-year-old girl divorcing her 38-year-old husband
What began as just an Instagram story grew into a veritable movement that has captured worldwide attention.

Her story has inadvertently created a space for people to engage in a wider discussion about gender-based violence in Sudanese society — an issue that is both pervasive and taboo.

I have watched in awe as individuals have mobilized around Noura's case -- not only on the ground, but across the diaspora and the globe. Among their kind acts have been countless letters written in support of Noura, to keep her morale up.
Her story has inadvertently created a space for people to engage in a wider discussion about gender-based violence in Sudanese society — an issue that is both pervasive and taboo. One Twitter thread inspired by #JusticeForNoura captured stories from Sudanese women and men who shared their experiences of sexual assault and violence.
As with the #MeToo movement, the #JusticeForNoura campaign has not only given Noura a voice, but survivors too, empowering them to fight the taboo culture that forces them into silence. It is tangible proof of the power of social media for providing a platform for women's voices.
Today, as we anxiously await the judge's ruling on Noura's appeal, it is comforting to know that it is not only the Sudanese people who stand with her, but the world.

The As Equals reporting project is funded by the European Journalism Centre via its Innovation in Development Reporting Grant Programme. Click here for more stories like this.