A space force? Trump may be right 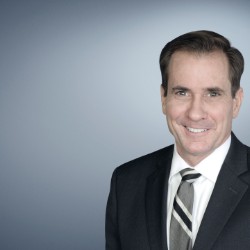 Editor’s Note: CNN national security analyst John Kirby, a retired rear admiral in the US Navy, was a spokesman for both the State and Defense departments in the Obama administration. The opinions expressed in this commentary are his.

President Donald Trump has ordered the Pentagon to begin the process of establishing a new military branch, the Space Force.

Standing up a whole new military branch is no small thing, even in the easiest of times. And these aren’t easy times right now.

We’ve still got troops fighting throughout the Middle East and Afghanistan. We’ve got burgeoning tensions with China in the South China Sea. Our cyber infrastructure still gets attacked every day by hackers and foreign governments. And, despite the President’s claim to the contrary, North Korea is still armed with nuclear weapons and the means to deliver them well beyond their borders.

PHOTO: AFP/Getty Images
SPACE, SPACE: This NASA Hubble Space Telescope image released 04 December, 2003 shows a festively colored nebula, called NGC 604, one of the largest known seething cauldrons of star birth in a nearby galaxy. NGC 604 is similar to familiar star-birth regions in our Milky Way galaxy, such as the Orion Nebula, but it is vastly larger in extent and contains many more recently formed stars. This monstrous star-birth region contains more than 200 brilliant blue stars within a cloud of glowing gases some 1,300 light-years across, nearly 100 times the size of the Orion Nebula. The bright stars in NGC 604 are extremely young by astronomical standards, having formed a mere 3 million years ago. AFP PHOTO/HO NASA/The Hubble Heritage Team /(AURA/STScI) (Photo credit should read NASA/AFP/Getty Images)

Related Article The race to militarize space is no joke

There’s a lot going on. That doesn’t mean exploring the development of a Space Force can’t also be tackled. The Pentagon is certainly capable of accomplishing multiple tasks at once. And, with the largest defense budget ever enacted – to the tune of $700 billion – at his disposal, Defense Secretary James Mattis can’t exactly argue he doesn’t have the resources to take it on.

But time, too, is a resource. So it’s a fair question for military leaders to ask if standing up a new force really needs to be their priority right now … and if so, with what sense of urgency.

There’s already an Air Force Space Command and a Space and Missile Defense Center. And the Navy and Army both also boast space-related activities and facilities.

As Gen. David Goldfein, the Air Force’s top officer, told members of the Senate Armed Services Subcommittee on Strategic Forces just last month, “Right now, as we make this transition from a benign to a warfighting environment … any move that actually ends up separating space as opposed to integrating space, I would argue is a move in the wrong direction.”

Supporters of the new force – especially Representatives Mike Rogers, R-Alabama, and Jim Cooper, D-Tennessee, chairman and ranking member of the House Armed Services Committee’s strategic forces subcommittee – argue that the United States is losing out to nations like Russia and China, which are advancing offensive and defensive space capabilities at an alarming rate.

And they say now is exactly the right time to focus on organizational change.

“The bureaucracy is always going to fight reform – always, especially the Pentagon,” Rogers told NPR in an interview. “They’re fighting this because they don’t want Congress meddling. … And they’ve got us in this situation now where Russia and China have become near peers. They’re close to surpassing us. What we’re proposing would change that.”

Rogers makes a fair point. The threats posed to satellite security by potentially hostile states like Russia and China are real. Mattis’ own national defense strategy says as much, labeling space a new “warfighting domain.”

And Rogers is right that the Pentagon tends to resist change. Nothing new there.

Harry Truman fought turf battles of his own when he pushed through the National Security Act of 1947, which merged the Departments of War and Navy into a single Defense Department, created the office of the Secretary of Defense, the Central Intelligence Agency, and, wait for it … established the US Air Force as an independent military service.

Navy admirals, in particular, pushed back on the potential that they could lose their air arm, and they bristled at the notion of losing a cabinet position.

PHOTO: AFP/Getty Images
A graphic showing traces of collision of particles at the Compact Muon Solenoid (CMS) experience is pictured with a slow speed experience at Universe of Particles exhibition of the the European Organization for Nuclear Research (CERN) on December 13, 2011 in Geneva. Scientists at the CERN believe they have identified the location of the Higgs boson, a elusive subatomic particle that is thought to be a basic building block of the universe.

Fleet Admiral William F. “Bull” Halsey spoke for many of his fellow flag officers at the time when he told the new – and first – secretary of defense, James Forrestal, that he would only support “the establishment of a single department of the armed forces if such establishment does not weaken the position of the US Navy in the scheme of things.”

That caveat, “in the scheme of things,” was noteworthy. Having lost the unification fight, the Navy set its sights on preserving against the upstart Air Force that which it considered to be its unique strategic value to national defense: air- and sea-based nuclear deterrence.

The ensuing food fights didn’t make anyone look very good, and forced yet another round of unification legislation two years later with the National Security Act of 1949, which attempted to better clarify service roles and missions. But the die had been cast. And it’s hard to imagine now, in retrospect, that Truman got it wrong by pushing both laws through.

I share the concerns of military leaders about segregating out certain space missions that are perhaps better integrated into existing organizations. It’s just not clear to me what problems a new Space Force is supposed to solve. And, if we’ve learned nothing else from 17 years of war, there is an undeniable logic to fostering jointness through shared responsibilities.

But I also have to allow for the possibility that we might look back 10 years from now and wonder why we didn’t have a Space Force sooner. Maybe space really is that unique a warfighting realm that it deserves its own people, command structure and resources. And maybe Air Force leaders will even come around to more publicly embrace the idea should some of their equities also be protected and preserved … you know, in the scheme of things.

In any event, the President has made his decision. There is now, at the very least, clarity on his expectations. He should, as Truman did, take to the airwaves and byways to make his case directly to the American people and to the Congress, which must ultimately legislate the Space Force into being.

Having lost the argument against the new force, Pentagon leaders must now develop the way forward. They must flesh out the President’s vision. And, in this, they possess an advantage their early Cold War predecessors didn’t necessarily have – the chance to make of it what they will, free from rivalry and recrimination.

They will be aided in that effort by their own Secretary of Defense, who, once adamantly opposed to the idea, seems to have warmed a wee bit.

“But to look now at the problem,” Mattis said in late May, “means we have to look afresh at it, and where are the specific problems, break them down, and if an organizational construct has to change, then I’m wide open to it.”

He’s giving himself and the Air Force a lot of flexibility there, a lot of different ways to meet the President’s intent. Nothing wrong with that.

The real question is, will they take advantage of this opportunity to appropriately shape the Space Force or will they squander it?

Only time will tell. And time, too, is a resource.

Mattis shouldn’t waste it, nor should he rush it.