Rapper XXXTentacion foreshadowed his own death

XXXTentacion spoke on his death before he was killed Monday.

The 20-year-old rapper, whose real name was Jahseh Onfroy, was gunned down in an apparent robbery in Broward County, Florida, police said.

Authorities said he was leaving a motorsports store shortly before 4 p.m. when two men in a dark SUV shot and killed him.

Fans have been sharing an eerie, undated Instagram Live video in which XXXTentacion talked about what he wanted his legacy to be after he died.

“If worse thing comes to worst, and I f—ing die or some s— and I’m not able to see out my dreams, I at least want to know that the kids perceived my message and were able to make something of themselves and able to take my message and use it and turn it into something positive and to at least have a good life,” he said.

“If I’m going to die or ever be a sacrifice, I want to make sure that my life made at least five million kids happy or they found some sort of answers or resolve in my life regardless of the negative around my name, regardless of the bad things people say to me,” the rapper added.

His legacy is a complicated one for some fans.

Viewed as one of South Florida’s most preeminent, emerging voices in hip-hop, the rapper collaborated with a variety of artists from Joey Bada$$ to Noah Cyrus.

In 2016 XXXTentacion was accused of homophobia after he sat down for an interview with Adam Grandmaison for the YouTube podcast “No Jumper.”

During the podcast the rapper told a story of choking and severely beating a cellmate he suspected was gay while they both were housed in a juvenile detention center.

XXXTENTACION & SKI MASK "THE SLUMP GOD " INTERVIEW WITH NO JUMPER 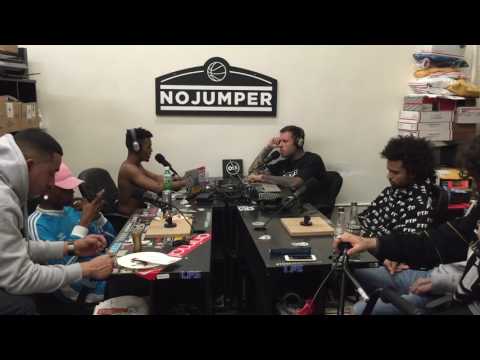 “Don’t think I’m trying to be f—ing cliché or a weirdo when I say this, but I was going crazy,” he said. “Like, I smear his blood on my face, in my hands, I got it in my nails, bro, I had it all over me.”

He then sparked backlash in September 2017 with the music video for his viral hit “Look at Me,” which contained a dramatization of XXXTentacion lynching a young white boy.

According to court documents he was awaiting trial for a domestic violence incident involving his pregnant girlfriend.

XXXTentacion pleaded not guilty to multiple felony counts, including witness tampering, and had been under house arrest for a time while he awaited trial.

The house arrest was lifted in March, according to Miami-Dade court documents.

Rapper Kreayshawn said on Twitter she was uncomfortable with some of the things being said on social media about XXXTentacion and his death.

“I was down to see X trialed and serve time. Honestly the jokes about his death are disheartening,” she tweeted. “I’m an avid fighter against abuse and have done my fair share of defacing of his album advertising in the past but all in all death is not an answer to a cycle (of) homophobia and abuse.”

CNN’s Amir Vera and Joe Sutton contributed to this report.