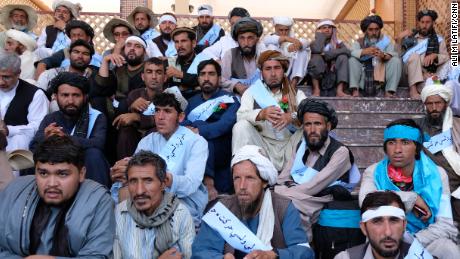 Members of the Helmand Peace March sit with supporters and well-wishers from Kabul.

Afghans who marched hundreds of miles for peace arrive in Kabul

By Ali M Latifi for CNN

Kabul, Afghanistan (CNN)On Monday, at least 65 activists -- the youngest just 17, the oldest 70 -- were greeted by hundreds of well-wishers as they made their way across the Afghan capital with chants of "We Want Peace!" and "No War!"

By the time the activists -- hailing from the provinces of Helmand, Kandahar and Herat -- made it to Kabul's historic Abdul Rahman mosque, they were flanked by local supporters, media and politicians expressing their appreciation for a movement that has captivated a nation reeling from an increasingly deadly war.
Despite the bright spirits of the marchers, the journey had taken its toll. According to local media, 30 of the activists had to be treated for dehydration, exhaustion and damage to their feet and legs from days of walking across roads of varying conditions.
Two of the marchers rest in the Abdul Rahman mosque in Kabul. Mosques were the marchers' chief refuge during their 700-kilometer (435-mile), 38-day trek.

Abdul Manai Hamdard, from the Gereshk district of Helmand province, says he never expected the march to take as long as it did.
Read More
"When I left Helmand I only took a few clothes and very little money. I thought we'd be in Kabul in 10 or 12 days."
Instead, the journey saw the 27-year-old trek across six provinces crisscrossing between government- and Taliban-controlled areas. As the journey continued, their numbers swelled, from the eight youth who began the march on May 12, to more than 65 by the time they reached Kabul.
Kabul's historic Abdul Rahman Mosque served as a gathering ground for the peace marchers to meet with local supporters, political officials who wanted to express their support and media documenting their arrival in the capital.
Along the way, they were greeted by eager locals, all of whom were more than willing to support them in their mission.
"We would arrive somewhere and suddenly we would be invited into people's homes and into their mosques. They listened to what we had to say, and we listened to them telling us about the condition of their lives where they are," says Hamdard, who joined the trek early on.
Hamdard estimates that in those 38 days he spoke to more than 100,000 people.
"What's most important is that every single one of them supported us."

The group's demands boil down to four basic points: a ceasefire between the Taliban and government forces, peace talks between the two sides, the implementation of a law agreed upon by the government and the Taliban, and the withdrawal of foreign forces.
The people he talked to in their homes and mosques, listening to their frustrations with a war that is taking an increasing toll on civilian life, are embodiments of the larger Afghan population, Hamdard says.
A vehicle belonging to the Helmand peace march reads "The People's Peace Movement."
"There are only a few people who don't want peace; everyone else is tired of the fighting."
Though government officials, including the governor of Kabul and the city's police chief, came to greet the activists, the activists insist they have no political connections, nor have they accepted any government help.
"This is our movement; we won't stop anyone from speaking, but it's by the people," says one of the activists when asked about the presence of officials at the mosque.

The peace marchers arrived in Kabul just as an unprecedented three-day ceasefire between the government and Taliban forces came to an end at the conclusion of the Eid al-Fitr holiday. It was only 30 minutes after the Taliban announced the resumption of their operations.
As the peace march journeyed on through six provinces, the numbers grew, with the initial eight youth being joined by dozens of others.
Hamdard points to that ceasefire -- which saw at least 30,000 Taliban fighters enter the cities and provinces of Afghanistan to take part in customary Eid prayers and revel in the three-day celebrations alongside government officials and members of the Afghan National Security Forces -- as a sign of what a movement like theirs could achieve.
It was, he says, why he was able to carry on with the journey in heat of 30 degrees Celsius (86 Fahrenheit) while fasting during the holy month of Ramadan.
"I never imagined I would see a sight like that in my country, but that's what our movement is about, that's why I started this journey," he says, referring to pictures and video showing Taliban and Afghan security forces hugging and men and women stopping to take pictures with Taliban fighters holding the group's white flag in their hands.