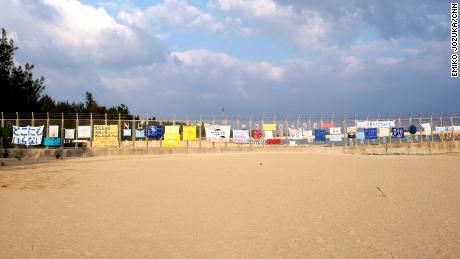 Ginowan, Japan (CNN)Akiko Urasaki knows what it's like to grow up with the specter of war.

She's spent her life in the shadow of a vast complex of US military bases in Okinawa, Japan's southernmost prefecture.
She doesn't, however, associate them with danger.
"We see the base as another space of life, not a space for preparing for war -- we don't see that part," Urasaki, now a rapper who goes under the moniker Awich, 31, told CNN.
It's where, as a child, Urasaki took English classes after school and experienced a world full of super-sized ice creams, hip hop and opportunity. Without realizing it, US culture became part of an identity that she's now proud of.
Akiko Urasaki, a rapper who goes under the name "Awich," grew up in the shadow of the US bases on Okinawa.
Read More
But to many older residents, who lived through the 1945 Battle of Okinawa in World War II, such a favorable view of the American military presence is unimaginable.
In that battle, which lasted almost three months and was one of the war's bloodiest, the island chain lost almost a third of its population and for the next 27 years it would be occupied by US troops.
In 1972, the US returned Okinawa to Japan's control, but tens of thousands of US troops remain on dozens of installations.