‘It’s in blood, the nature and the culture.’ Iceland’s hard World Cup work pays off

The first fires came in the early morning.

In the distance, a plume of smoke rose from the eastern side of the island. Lava began to spew forth toward the town of Vestmannaeyjar, on Heimaey, the largest of the rocky Icelandic Westman Islands.

At the time Iceland’s current coach, Heimir Hallgrimsson, was just 5 years old. He followed his family on board one of hundreds of fishing trawlers offering an escape route, most of which were there only because bad weather had thwarted their attempts to sail out to sea.

Black ashes cover the town of Vestmannaeyjar on the island of Heimaey after the eruption of the Eldfell volcano in 1973.
Scholz/dpa/AP

The boats made haste for the mainland as the lava forged an unstoppable orange path toward the town he called home. By the time he would return, some eight months later, home would be a far different place.

Hallgrimsson remembers the fire of 1973. The memories are not as clear as they used to be but the destruction wrought upon the island by Eldfell, the towering volcano, has left its scar not just on the dramatic landscape, but on the spirit of its people.

Sitting inside the national football stadium in the capital Reykjavik, Hallgrimsson strikes a relaxed figure. There are less than three weeks until he leads Iceland into its first ever World Cup finals, and an opening game against football’s very own force of nature, Argentina’s Lionel Messi.

But there is plenty of time to discuss Messi, while any mention of Hallgrimsson’s previous role as the island’s local dentist, is met with a look that suggests he would rather attempt a root canal upon himself than be forced to retell the story of how he swapped operating on incisors for trying to find the perfect incisive through ball.

However, at the mention of Vestmannaeyjar, his face changes. He sits up, and something switches. Hallgrimsson is not just the face of this Icelandic national team, he’s the ambassador for the island of 4,500 people who are willing him forward with every step. 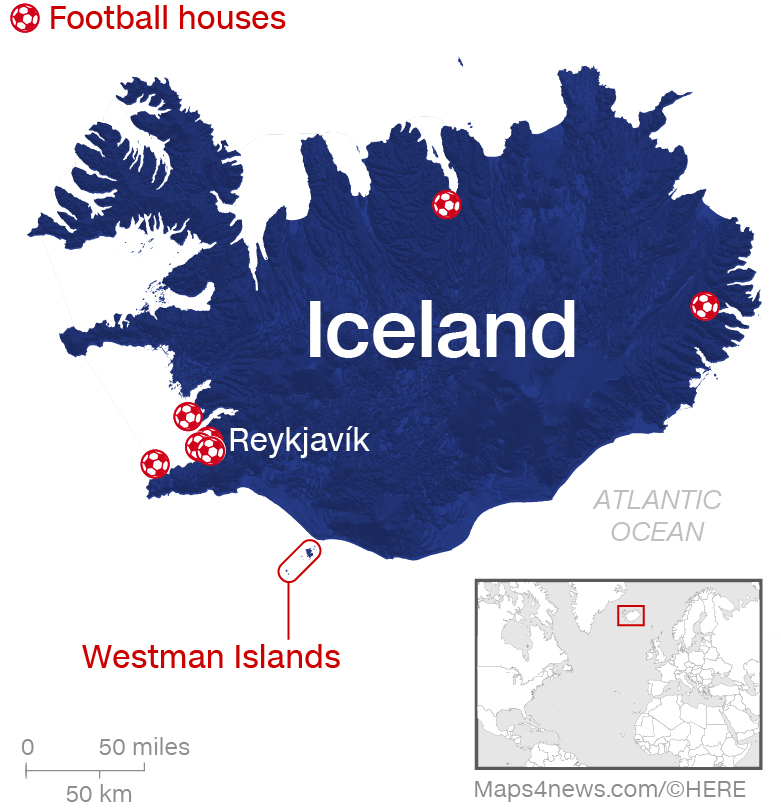 “The volcano made the unity between people much stronger, especially when it is the people coming together to fight against nature,” he says.

“That is definitely one of the aspects which helps make you the person you are.

“There was a big job to do after the eruption and a lot of people moved back to the island and were cleaning for years and everybody had to lend a hand to do it. I think it definitely helps you as a character and sculpts you as the person you are.”

Heimaey is the largest of the 15 Westman Islands.
Patrick Sung/CNN

For six months, the lava flowed down upon Vestmannaeyjar. The reconstruction work that followed was long and arduous, but ultimately successful. It relied on a sense of community, of belonging and hard, hard work.

“I come from an island outside of Iceland so I think we are like an exaggerated version of Icelanders,” Hallgrimsson says with a wry smile.

“We think we are stronger than Icelanders and over the years we’ve had to rely on ourselves with the isolation, the weather and so on. I think hard work is the key to success when you come from such countries or villages. It’s in the blood, it’s in the nature and it’s in the culture.”

Which perhaps explains why such qualities are not only instilled in Hallgrimsson’s psyche, but also those of his players.

READ: How Australia keep fit on 250,000-kilometer journey to Russia

No country as small as Iceland has ever reached the World Cup finals. Trinidad and Tobago, the next-smallest nation to reach the tournament, did so in 2006 with a population of 1.3 million, around a million more than Iceland’s 340,000.

Its success at the 2016 European Championship finals, where the team reached the quarterfinals after defeating England, brought new fans, the famous “Viking clap” celebration and a romance that is so rarely on show in a sport where money more often that not trumps heart.

As it did in France two years ago, Iceland must overcome all the odds if it is to progress from a group that includes Argentina, Croatia and Nigeria.

Hallgrimsson is realistic about his team’s chances – all football coaches have to manage expectations – though most Iceland supporters, given the nation’s previous failures, are merely happy to be at the World Cup for the first time in its history.

The stadium on the island is home to the IBV football club.
Patrick Sung/CNN

While this summer is historic for Iceland, for those in Vestmannaeyjar, it is something truly special. It is a 25-minute flight from Reykjavik, or a 30-minute ferry ride in the summer. When the weather is rough, it takes nearly three hours to make the journey.

There are four restaurants, a brewery and puffins – lots and lots of puffins, though not as many as there used to be with the local fish stocks running low. Many of those living in Vestmannaeyjar make their money from fishing and farming, while tourists flock to the island in the summer to enjoy the annual music festival.

Einar Gunnarsson, CNN’s local guide, begins to tell the story of how he fell in love with Vestmannaeyjar.

The town of Vestmannaeyjar in the distance is home to Icelandic national coach Heimir Hallgrimsson.
James Masters/CNN

Looking out across Heimaey from one of the many wonderful vantage points, he points to the black volcanic rocks scattered across the island as far as the eye can see. He points out the houses that escaped on that fateful night of January 23, 1973, and the land that was scorched by the fury of Eldfell, the volcano that broods silently over the island. And yet, the view of Heimaey remains quite breathtaking.

“We call this island ‘Our Paradise.’” Gunnarsson says, glancing across the valley.

Gunnarsson moved across from the mainland three years ago and has never regretted it. “My friends think I’m crazy,” he says with a mischievous smile.

Though a somewhat recent arrival, he is familiar with most people on an island where everybody tends to know everybody.

A golf professional, Gunnarsson teaches on the island’s spectacular course, where around 10% of the local population are members. On an island that is just 5.2 square miles wide, there are four full-size football fields, including that of IBV, the island’s local team, which plays in the Icelandic league. On top of that there are three handball courts, a swimming pool and an indoor football facility.

Sport on the island is not just about Hallgrimsson but his success has certainly inspired. Helgi Bragason, whose wife is the aunt of the Icelandic coach, can barely suppress his pride when talking about his fellow islander.

“It’s just normal for me to see our dentist as the coach,” Helgi says with a smile. “We’re very proud of him. He says that he likes being outside of the public spotlight and being here on the island.”

The view of the sea from the island's spectacualr golf course.
James Masters/CNN

Hallgrimsson heads back home whenever he can to escape the pressures of international football and the seemingly never-ending requests for interviews. Instead, he will go walking in the hills, listen to inspirational talks or even treat a couple of dental patients in search of relaxation.

But this summer there will be no escape. All of Iceland will stop on June 16 when its team faces Argentina, a two-time World Cup winner and a side littered with world stars. As was the case two years ago, many will travel to support their heroes, while some such as Bragason will travel to Russia from the island, ensuring Vestmannaeyjar is represented in the crowd.

In the bars back home, islanders will toast Hallgrimsson with a “Heimir” beer that has been commissioned especially for the occasion. The local golf club will have the big screen on, and families will gather around their televisions to watch their local dentist do his other job.

A special 'Heimir' beer has been brewed on the island in honor of the national coach.
James Masters/CNN

Everywhere you go on the island, all anyone wants to talk about is football, Hallgrimsson and Argentina.

For Hallgrimsson, Argentina is a particularly romantic opponent.

As a child, he and his classmates made their own Argentina shirts for the 1978 World Cup, a tournament the South Americans won as host nation.

He remembers running around with “Kempes” on the back of the shirt, representing Mario.

Kempes, the Argentine striker whose goals secured the trophy.

Now Argentina is likely to be fired by Messi – possibly the greatest player to have ever played the game.

The world’s biggest player against the World Cup’s smallest nation – and Hallgrimsson will have his team primed and ready.

It is after all, the the only way he, Iceland and Vestmannaeyjar have ever known.