Pardon-happy President Donald Trump is hungry for more, but his idea to posthumously pardon Muhammad Ali is awkward and confusing.

It’s even more awkward and confusing than Trump’s argument Friday that he’s not above the law, but that he most certainly has the power to pardon himself. Square those two ideas.

Try also to square his focus on individual pardons and his ability to personally gift second chances with his administration’s efforts to seek harsher sentences rather than ease sentencing rules, as some bipartisan proposals on Capitol Hill would have him do.

“The power to pardon is a beautiful thing,” Trump said Friday on his way out the door at the White House. “You got to get it right and you got to get the right people. I am looking at Muhammad Ali,” he said, before saying he wants to pardon people who aren’t famous too.

His Ali idea is confusing because Ali needs no pardon. The Supreme Court reversed Ali’s conviction in 1971.

“We appreciate President Trump’s sentiment, but a pardon is unnecessary,” said Ron Tweel, Ali’s lawyer in a statement after Trump’s comment. “The US Supreme Court overturned the conviction of Muhammad Ali in a unanimous decision in 1971. There is no conviction from which a pardon is needed.”

It’s awkward because it would create an uncomfortable comparison – Ali’s conviction in his boxing prime for taking a moral stand against the draft contrasts with the multiple deferments, including one for heel spurs, that Trump received.

It’s more than that. Ali didn’t just reject the draft, he went to be drafted and made an incredible moral show of refusing to be called. He knew there would be consequences and he faced them on principle, seeking exemptions first as a conscientious objector and then because he was a minister.

Muhammad Ali, then also known as Cassius Clay, at the Army Induction Center where he was scheduled to be inducted into the Army. He refused induction thereby leaving himself open to criminal prosecution.
Bettmann Archive/Getty Images

“I’m not going 10,000 miles from home to help murder and burn another poor nation simply to continue the domination of white slave masters of the darker people the world over,” Ali said, according to one historical account. “If I thought the war was going to bring freedom and equality to 22 million of my people, they wouldn’t have to draft me, I’d join tomorrow.”

There are plenty of videos on YouTube of Ali’s comments about the draft.

Muhammad Ali interview on not joining the army 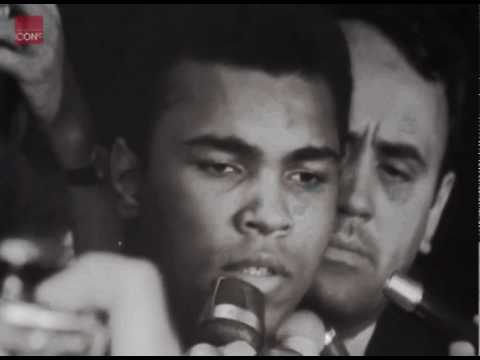 It is not a stretch to see a direct line between Ali’s activism and that of people like Colin Kaepernick, who did not face prosecution but has certainly faced consequences for his decision to kneel during the National Anthem before NFL games. Trump has declared rhetorical war on the NFL over the issue. The NFL recently enacted a new policy that allows players to stay in the locker room rather than stand for the anthem, but face fines if they kneel. That hasn’t muted Trump’s criticism of the players.

Trump offered to take recommendations of people NFL players think have been treated unfairly by the justice system who should be pardoned or have their sentence commuted. He’ll have a committee will look at those recommendations.

Mistrust of the justice system has been a hallmark of Trump’s presidency so far, from his disdain for federal judges standing in the way of his policies to his repeated declaration that the investigation into possible collusion between his campaign and Russians is a “witch hunt.”

Those issues are very different than the growing movement to reduce change the way the country deals with people who break the law.

PHOENIX, AZ - AUGUST 22: U.S. President Donald Trump speaks to a crowd of supporters at the Phoenix Convention Center during a rally on August 22, 2017 in Phoenix, Arizona. An earlier statement by the president that he was considering a pardon for Joe Arpaio,, the former sheriff of Maricopa County who was convicted of criminal contempt of court for defying a court order in a case involving racial profiling, has angered Latinos and immigrant rights advocates. (Photo by Ralph Freso/Getty Images)
Ralph Freso/Getty Images

Trump did not mention that he also has the power right now to encourage Republicans to push through bipartisan legislation that would change sentencing rules. He has not done that. It is currently languishing on Capitol Hill while a bill that does not change those rules has passed the House.

It seems Trump would rather have the power to individually bestow the favor of a pardon – he said he is looking at more than 3,000 potential pardons.

“I would get more thrill out of pardoning people nobody has heard of, like Alice yesterday,” said Trump, referring to his commutation of Alice Johnson, a woman who served more than 20 years on a first-time drug charge. He name-checked Kim Kardashian West for bringing Johnson to his attention.

“OJ?” asked a reporter, referring to football star OJ Simpson, who was found guilty of kidnapping and armed robbery years after being found not guilty in the deaths of his ex-wife, Nicole Brown Simpson, and her friend, Ronald Lyle Goldman, 25.

“No, I’m not thinking about pardoning OJ,” Trump said.

This story has been updated to fix the name of Ali’s attorney.