‘Hotel Artemis’ isn’t worth checking out, despite its guest list

“Hotel Artemis” serves up a peculiar mishmash of ideas, made more intriguing by its eclectic roster of high-class talent. Ultimately, though, this moody, bleak film about a secretive hospital for criminals oozes atmosphere but isn’t worth checking out, or perhaps, checking in.

Set a decade in the future, the movie finds Los Angeles in the throes of mass civil unrest, born out of water shortages related to privatized ownership of the precious commodity. As nightmarish near-futures go, so far, so pretty interesting, if depressing.

Against that backdrop, though, writer Drew Pearce (also making his directing debut) puts together a strange tale set in a facility where connected criminals come in time of need, securing state-of-the-art treatment from The Nurse (Jodie Foster) and her massive orderly, the aptly named Everest (“Guardians of the Galaxy’s” Dave Bautista).

In short order, the cast of patients grows to include a pair of wounded thieves, brothers Sherman (“This is Us’s” Sterling K. Brown) and Lev (“Atlanta’s Brian Tyree Henry); a master assassin (“The Mummy’s Sofia Boutella), and the crime boss who founded the facility (Jeff Goldblum, in what amounts to a cameo) along with his vicious son (Zachary Quinto), who’s a little too eager to gain dad’s approval. 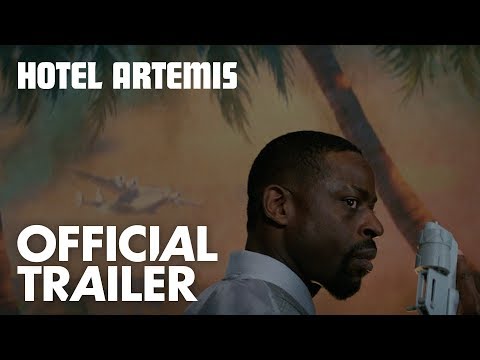 Pretty soon, all of the rules that The Nurse articulates right off the bat – “No guns. No cops. No killing the other patients” – start falling by the wayside, in an evening that The Nurse keeps likening to any other Wednesday, but which becomes increasingly desperate as the night rages on.

To his credit, Pearce keeps the action moving, but it’s at the expense of catching a breath to make much sense of what’s happening. Instead, dollops of back story – most of it pretty banal – drip out amid the chaos, much of it stemming from The Nurse’s decision to break the rules herself by taking in an injured cop (Jenny Slate).

The casting does help elevate the material, and there’s some dark humor in the character interactions. Foster – in her first screen role in five years – has the most depth, although the pain she’s nursing is of a too-familiar variety.

The hotel itself – in which the vast majority of the narrative unfolds – is a significant character in the proceedings, but the murky hallways more than anything resemble the Tower of Terror ride at Disney World, albeit with a lot more bloodshed and profanity.

Alas, the at-first intriguing idea of all this transpiring while the wider society is falling apart gets mostly lost amid the more prosaic concerns. That’s obviously intentional, but the sheer number of unanswered questions creates a sense that it should have been either fleshed out or discarded.

In a summer season heavy on sequels and aspiring blockbusters, it’s possible to admire “Hotel Artemis” for daring to harbor such ambitions without feeling like it delivers on them. And unlike some of its guests, the problems that ail it can be easily fixed.