Marvel’s ‘Cloak & Dagger’ doesn’t get under the skin

Marvel has demonstrated its versatility in television, specifically with Netflix shows like “Luke Cage” and “Daredevil.” But the movie hit factory has also unleashed several disappointments – ABC’s “Inhumans” comes to mind – and adds to that less-than-super resume with “Cloak & Dagger,” a drama for sister ABC network Freeform that isn’t sharp enough to draw blood.

Basically, think of “Cloak & Dagger” as “Marvel’s Teens With Issues,” a character-driven drama about a pair of teenagers slowly (actually, very slowly) coming to grips with the idea that they each possess vaguely defined powers. (The vagueness will be magnified for those who aren’t familiar with the comics, but even the well versed might find themselves a trifle puzzled.)

The two youths are united by a shared early trauma, but the series takes its time bringing them together, seeking to understand powers that are a mystery to them. Tyrone (Aubrey Joseph), the Cloak in the equation, can phase from place to place in darkness, while Dagger, Tandy (Olivia Holt), can conjure light daggers, a handy ability that – like practically everything else here – initially isn’t put to effective use. 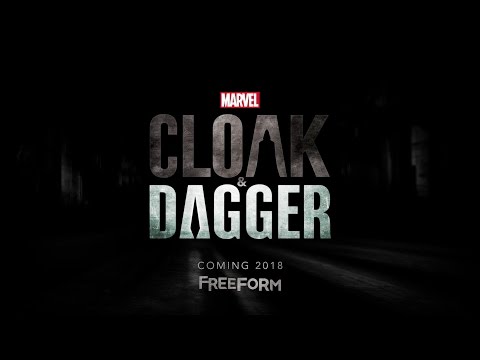 Clearly, the goal was to capture some of the coming-of-age qualities inherent in the X-Men and Spider-Man franchises, which Marvel also brought to its Hulu series “Runaways.” But the show is so dour there’s scant thrill in that pubescent metaphor – the confusion over strange new feelings – instead playing primarily like a junior edition of Marvel’s gritty Netflix shows, which, it’s worth noting, can also be a little too leisurely paced and static for their own good.

Freeform, the channel formerly known as ABC Family, was understandably excited about laying claim to its own piece of the Marvel universe, capitalizing on the synergistic ties to a sister Disney division.

The nagging sense, though, is that Marvel risks stretching its character library a little thin with the company’s aggressive TV expansion, especially when those shows are budgeted in a manner that allows for only a smidgeon of the action that movie-goers have come to enjoy.

That leaves the characters as the show’s principal appeal, which when handled properly can be enough. Marvel has stressed that there are all kinds of superhero stories, and TV is perfectly suited to a more small-boned variety.

As is, though, “Cloak & Dagger” merely demonstrates again that when it comes to churning out mediocre programs, even the Marvel name doesn’t provide a cloak of invincibility.