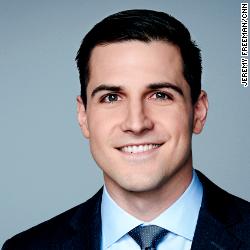 Earthquakes are still rattling the summit of Hawaii’s Kilauea volcano, after a magnitude 5.5 quake rocked the area Sunday, according to Hawaii County Civil Defense officials.

Sunday’s quake sent an ash plume 8,000 feet into the sky, but did not cause a tsunami threat, according to the Pacific Tsunami Warning Center.

There were 500 quakes in the summit area of Kilauea in a 24-hour period over the weekend – the highest rate ever measured at the summit area, according to Brian Shiro, supervisory geophysicist at the USGS Hawaiian Volcano Observatory.

Those earthquakes have continued near the summit, according to Jim Kauahikaua, a geophysicist with the US Geological Survey’s Hawaiian Volcano Observatory. He told reporters on Monday that temblors are nearly continuous at the summit and that gas emissions remain “very high.”

Lava from a fissure near the volcano entered Kapoho Bay late Sunday or early Monday, forcing billowing clouds of steam into the atmosphere as hot lava hit the cool water of the Pacific Ocean. The flow prompted warnings from Hawaii County Civil Defense authorities about laze, a nasty mashup of lava and haze that sends hydrochloric acid and volcanic glass particles into the air.

Hawaii Civil Defense Administrator Talmadge Magno told reporters that people needed to stay at least 1,000 feet back from the bay to avoid health effects from the laze, in accordance with Environmental Protection Agency standards.

“It stings,” he said. “It will irritate your eyes. And you don’t want to be breathing that.”

PHOTO: USGS Volcanoes
When lava hits the ocean it sends hydrochloric acid and volcanic glass particles into the air.

Lava from Kilauea has covered an area of nearly 5,000 acres, according to Hawaii Volcanoes National Park. Magno described the molten lava as being “like a flood, pouring out, covering everything in its path.”

At least 117 homes have been destroyed in the four weeks since lava began flowing, Magno said Monday. He said that number was sure to grow because there were many more damaged homes to count.

Nearly a dozen people were left stranded in an area cut off by lava on Sunday. Hawaii Civil Defense Service officials said they went through the neighborhood to warn residents this was their last chance to evacuate before their final escape route was cut off by lava.

Some chose to stay in the area, which now has no power, cell reception, landlines or county water, officials said.

Authorities are planning to airlift people out if the lava spreads farther and endangers the dozen or so holdouts. Some said they were staying because they had nowhere else to go, officials said.

Four people were evacuated from an isolated part of the Kapoho community Sunday, according to the Hawaii Fire Department.

“USGS was on a routine overflight and saw people on the road in an area cut off by the lava. They stopped to inquire of their situation, and then when asked, airlifted them to a safe place. They had become trapped after trying to move belongings, and had no cell service,” according to they agency statement.

When asked at a news conference Monday about the number of evacuations, he said he didn’t have a good estimate because up to 80% of the houses in some areas are vacation rentals. He told reporters that there is still plenty of shelter space but that state officials are working with federal counterparts to work on a plan for housing people who’ve lost their homes to the lava.

PHOTO: USGS Hawaiian Volcano Observatory
This photo from USGS shows the flowfront, which was active and spreading.

Meanwhile, seven people were cited Saturday for loitering in a disaster zone, and they will have to appear in court, Hawaii officials said.

Four weeks have passed since the first eruption rocked Hawaii’s Big Island and lava continues oozing from volcanic fissures, burning homes to the ground and turning into rivers of molten rock. This eruption has lasted longer than the 1955 and 1924 eruptions, the USGS said.

No, Don’t Roast Marshmallows Over Hawaii Volcanic Vents – And Other Answers From The USGS