By Euan McKirdy and Kathy Quiano, CNN
Updated 6:15 AM EDT, Mon June 4, 2018
Link Copied!
Ad Feedback
Speaking at a business forum in Manila in December 2016, Duterte admitted killing suspected criminals during his time as mayor of Davao City.
AFP/Stringer/Getty Images
The day after Trump won the US presidential election in November 2016, Duterte said he and Trump share some traits.
TED ALJIBE/Getty Images
After reports emerged of a potentially blocked arms sale, Duterte told CNN Philippines in November 2016 that he would turn to Russia for weapons.
AFP/Stringer/Getty Images
During a state visit to China in October 2016, Duterte announced his economic and military 'separation' from the US.
Pool/Getty Images
In October 2016 Duterte expressed growing hostility with the US president.
Lam Yik Fei/Stringer/Getty Images
After US president Barack Obama said he would raise extrajudicial killings in a meeting with Duterte, the Philippines President responded angrily on September 5, first in English then in Tagalog. As a result, Obama canceled the meeting.
As he addressed troops at the country's Armed Forces Central Command Headquarters on August 5, Duterte recounted U.S. Secretary of State John Kerry's visit to the country, saying in Tagalog that he was feuding with U.S. Ambassador to the Philippines Philip Goldberg.
NOEL CELIS/AFP/Getty Images
The Philippines president-elect effectively said he supported vigilantism against drug dealers and criminals in a nationally televised speech in June 2016.
MANMAN DEJETO/AFP/Getty Images
Foreign diplomats weighing in on Rodrigo Duterte's controversial remarks did not sit well with the then-mayor.
NOEL CELIS/AFP/Getty Images
Duterte apologized to the Pope after cursing him for the traffic he caused during a 2015 Papal visit to the Philippines.
Bullit Marquez/AP
In September 2016, Duterte likened himself to the Nazi leader and announced that he wants to kill millions of drug addicts.
NOEL CELIS/AFP/Getty Images
Speaking at a press conference to unveil his new cabinet on May 31 2016, Rodrigo Duterte said journalists killed on the job in the Philippines were often corrupt.
NOEL CELIS/AFP/Getty Images
During the third and last presidential debate, Duterte had said that he would plant a Philippine flag in disputed territories should China refuse to recognize a favorable ruling for the Philippines.
STR/AFP/Getty Images
Duterte made international headlines in April 2016 with his inflammatory comments on the 1989 rape and murder of an Australian missionary that took place in Davao City.
AFP/Getty Images
He also lashed out at the womens' group that filed a complaint against him before the Commission on Human Rights (CHR).
Lam Yik Fei/Getty Images
At a CNN Philippines Townhall event in February 2016, Duterte, admitted that he had three girlfriends and a common-law wife. His marriage to Elizabeth Zimmerman was annulled due to his womanizing, but he denied this meant he objectified women.
MANMAN DEJETO/AFP/Getty Images
Although he later denied the accusations, the former Davao City mayor admitted his links to the alleged Davao death squad in a May 2015 broadcast of his local television talk show.
NOEL CELIS/AFP/AFP/Getty Images
CNN  —

Philippines President Rodrigo Duterte has sparked outrage after kissing a woman on the lips during a meet and greet event in South Korea.

Opposition senator Risa Hontiveros described the act as a “despicable display of sexism and grave abuse of authority,” and accused the controversial leader of acting like a “feudal king.”

After offering each woman a copy of a book, reportedly a title which is critical of the Catholic church, he pecked one of the two women on the cheek.

As the other presented the side of her face, Duterte instead gestured to his lips, indicating that he wanted the woman to kiss him squarely on the mouth, to whoops and cheers from the crowd. 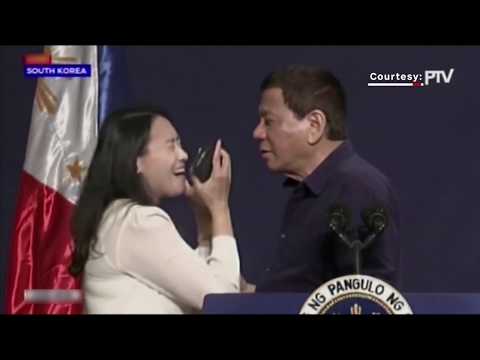 Duterte, who has a long-term partner with whom he has a daughter, reportedly asked the woman if she was single while onstage.

“Are you single? You’re not separated from (your husband)? But you can tell him that this is just a joke?” he asked, according to a report by Philippines news outlet Rappler.

According to Philippines state media PNA, the woman, identified as Bea Kim, is married to a South Korean national and has two children.

Kim said that there was “no malice” in the kiss, and that it didn’t “mean anything except to entertain and make other Filipinos in the gathering happy.”

On his trips to foreign countries, the president often takes time to meet members of the Filipino diaspora.

The office of the president has not responded to a CNN request for comment, and the Philippines government has yet to comment publicly on the incident.

The kiss in Seoul stirred heated debate among Filipino politicians, activists and social media users, amid accusations of misogyny and unstatesman-like behavior.

Hontiveros – the sister of a CNN Philippines anchor – said that Duterte “acted like a feudal king who thinks that being the President is an entitlement to do anything that he pleases,” adding that “uneven power relations” meant that the kiss wasn’t an act between consenting adults.

Facebook user RJ Barrete, whose profile identifies him as a young journalist, also commented that the power dynamics meant that it was impossible for the woman to properly consent to being kissed.

“Don’t blame it on women! So much disgust for this ‘man.’ And if you’re going to check the video, he was initiating to do it, (kissing) the woman even if it’s becoming uncomfortable for her,” his post reads.

“This is not an issue of who initiated it, not even about consent because obviously, power was at play! And most importantly, as the President of a country you don’t initiate an act like this in an official event!”

Women’s rights group Gabriela also denounced the act, saying that it represented “disgusting theatrics of a misogynist president who feels entitled to demean, humiliate or disrespect women according to his whim.”

Others, however, have come out in support of the president. “He got a hug and a kiss on the lips. Wahahaha (Duterte) is so mischievous,” said one, according to CNN affiliate CNN Philippines.

Another said that his actions were typical of the way Visayans – his ethnic group – joked around.

The outspoken leader has a history of disparaging remarks about women, notably saying on the campaign trail in 2016, when he said that the rape and murder of an Australian missionary who was visiting a Filipino jail was “a waste” and that he should “have been first” to sexually assault the woman. He later apologized for the remarks.

At a CNN Philippines town hall event in February that year he admitted that he had three girlfriends and a common-law wife. His previous marriage was annulled due to his womanizing, but he denied this meant he objectified women.

He has also drawn widespread condemnation for his initiation and support of a bloody war on drugs, which has seen thousands of suspected drug users and dealers killed by police and vigilantes.