New York attorney in racist rant has history of confrontations

The man who berated employees and customers for speaking Spanish in a New York City cafe has a history of aggressively confronting strangers on their identity.

Aaron Schlossberg, an attorney in New York, was identified as the man in a Fresh Kitchen in Manhattan who angrily told employees and customers to speak English because “This is America!”

“If they have the balls to come here and live off my money, I pay for their welfare,” he says, incorrectly asserting that undocumented immigrants are eligible for federal public benefits. “I pay for their ability to be here. The least they can do … is speak English.”

Man to Spanish speakers at New York restaurant: 'My next call is to ICE'

Since that video went viral, two men have come forward with other stories about Schlossberg becoming belligerent in public.

Willie Morris said Schlossberg bumped into him on the sidewalk and called him an “ugly f***ing foreigner” (Morris is from Massachusetts). Isaac Saul described Schlossberg angrily yelling at an ultra-Orthodox Jewish man who was participating in a protest, accusing him of being a fake Jew. Both encounters were caught on video.

“If it’s once, maybe you can pawn it off as someone having a bad day, but this is not,” Morris said. “This is like an ongoing thing for this person. To be caught on video twice? How many times has he not been caught on video?”

CNN has called and left messages with Schlossberg’s law office but has not heard back.

Willie Morris, a 34-year-old consultant and adviser for tech companies, said he recognized Schlossberg from an encounter on Manhattan’s Fifth Avenue in October 2016. 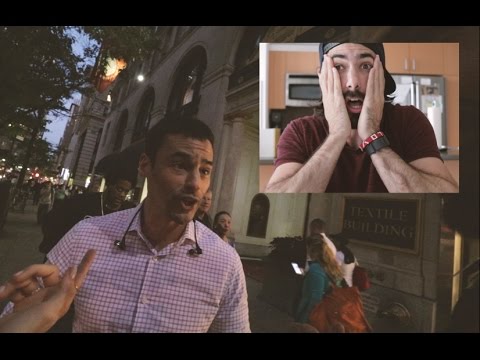 Morris said he was walking down the street when a man coming from the opposite direction made eye contact, walked faster toward him and shoved him with his briefcase.

“He immediately … starts yelling mostly racist and xenophobic stuff,” Morris said. “I was so shocked, I’ve lived in NYC for five years and have never had anything like this happen. I was waiting for someone to jump out and scream, ‘Gotcha!’ “

Morris posted video of the incident, along with his own commentary, to YouTube the next day. In the video, a man can be seen asking Morris, “What country are you from?” and then saying: “I’m going to call the police. You don’t run into me. I’m a citizen here, you’re not. You’re an ugly f***ing foreigner. F*** you.”

In commentary afterward, Morris said he was born in Massachusetts, and he held up his US passport.

“It was so surreal,” he told CNN. “Thankfully, I had started vlogging a few months before, so I had turned my camera on and caught it all. He was threatening to call the cops, but he eventually walked away, and we realized it wasn’t just a weird stunt.”

The Fresh Kitchen video jolted his memory about the incident.

“I let it go and pretty much forgot about it until I was scrolling through Twitter yesterday and randomly saw a thumbnail and thought, ‘No freaking way!’” Morris said.

Isaac Saul, lead editor for the digital media organization A Plus, saw the Fresh Kitchen video and recognized Schlossberg from a previous encounter at a protest just outside Saul’s Midtown Manhattan office.

A screenshot of Aaron Schlossberg yelling during a protest in New York City on May 25, 2017.
A Plus / Isaac Saul

On May 25, 2017, Linda Sarsour, an outspoken American Muslim political activist, was speaking at a City University of New York graduation ceremony. Saul said there was a protest against Sarsour just outside his office, and notable anti-Islam activist Pamela Geller and far-right personality Milo Yiannopoulos attended.

Saul also said there were Haredi Jews – ultra-Orthodox Jews who, in some cases, are stringently opposed to Zionism and the State of Israel – counterprotesting in support of Sarsour’s speech.

Saul said that after the protest ended, he saw some members of the protest “get in the face” of the counterprotesters.

“I just remembered this guy because he was so intense,” Saul said, referring to Schlossberg. “Of all the people that were there, he sort of seemed most incensed by (the counterprotesters’) presence.”