Myanmar is a major source of human hair, feeding the global demand for wigs, weaves and hair extensions

But as the nation grows richer, there are fears that fewer women are willing to part with their locks

Aye Aye Thein, 55, cuts hair for a living at Insein market in the north of Yangon, Myanmar’s largest city.

But unlike most hairdressers, she doesn’t charge her customers. Instead, she pays them.

The country is a major source of human hair, feeding the global demand for wigs, weaves and hair extensions.

“Myanmar hair is the softest, most sought-after hair in Asia,” said Aye Aye Thein, whose hair stall is nestled between those of a greengrocer and a betel nut seller.

Figures suggest the global trade in human hair was worth $87.4 million in 2016, with Myanmar the third largest exporter after India and Tunisia.

In Myanmar, hair can be considered sacred: The gilded Shwedagon Pagoda, one of the Buddhist country’s holiest sites, is believed to be built on strands of Buddha’s hair.

But it’s also common for women here to cut their hair to make ends meet and during Buddhist New Year celebrations, when some women and girls become nuns for a short time and cutting off their hair shows an absolute sacrifice, a detachment from any distractions.

Much of this hair makes its way to China, where it’s processed and sold to hairstylists in the West. But as Myanmar grows richer, opening up after decades of military rule, there are fears that fewer women are willing to part with their locks.

On an average day, Aye Aye Thein says, she has seven to 10 customers.

“Look at this hair! It’s really nice,” she said, gesturing at one thick clasp of hair in her palm. “It’s not oily, not too dry, small bits aren’t breaking off, light and fluffy.”

She then gestured to the tops: “It should be solid, no frizz or split ends.”

The pricing of hair depends on the quality and weight, which is weighed in “viss,” a traditional Burmese unit of measurement, roughly equal to 1½ kilograms.

Huddled over a battered pair of scales, Aye Aye Thein estimates the price of hair by its feel and a simple scrape of the bundle with an open scissor arm to test for firmness and smoothness.

Placing the hair on the scales, she then measures it in viss with small weights before handing over a wad of money to a customer.

Most transactions range from 15,000 kyat ($11) to over 200,000 kyat ($150) for hair over 10 inches. This income goes a long way in Myanmar, where the minimum wage is 3,600 kyat ($2.70) a day. The hair that fetches the highest price is usually from women with ankle-length hair whose locks can be divided into many bundles to be sold individually.

Men occasionally grow their hair to sell it but it’s not common – although buyers don’t discriminate between male and female hair.

China is the biggest importer of Myanmar hair, traders said. One Chinese buyer from Gungzhou on a buying trip to Myanmar who declined to give his name explained, “I will then sell this hair to wig or hair extension makers back home.”

A hair buyer from China with bunches of hair he has bought from Yangon's Insein market.
Libby Hogan/CNN

Buyers at Insein market say the reasons women want to sell their hair vary. For many, it’s a much-needed infusion of cash – whether to save for a house, repay loans or simply have some pocket change.

Phyu Phyu, a 21-year-old student, said she wanted to sell her hair “because it is too hot to have long hair.”

She says that with the $45 she made for her long black locks, she will save some, buy clothes with some and donate the rest to the Buddhist monks who weave their way through the city each morning to collect alms.

In the western region of Rakhine, Myanmar’s second-poorest state, which has been riven by communal violence, the hair trade is seen as a reliable form of income in uncertain times.

A woman has her hair cut in Yangon, Myanmar.
Loibby Hogan/CNN

Khaing Yu Swe, of the state capital Sittwe, entered the hair trading market 17 years ago: “Before, I did weaving, but buying raw materials was very expensive, and the profit could not cover my family’s basic needs.”

Anthropologist Emma Tarlo, author of “Entanglement: The Secret Lives of Hair,” says the trade has always relied on a mixture of poor women selling their hair and religious donations.

“The fact that Myanmar contains large numbers of long-haired women poor enough to be willing to sell their hair is an important factor,” she said.

During the Buddhist new year celebration, Thingyan, which usually falls in April, many women and girls choose to cut off their hair and become nuns for about 10 days.

Yuzana Nyani, a nun, says that this act of selflessness and dedication to Buddhist meditation is a form of making merit to reach Nirvana.

“To cut off your hair reminds us that [hair] really has no sense or spiritual value. … When it is removed from the body, it doesn’t have any worth,” Yuzana Nyani said.

May Thet Chayay, 12, chose to become a nun show her parents that she is a good Buddhist. 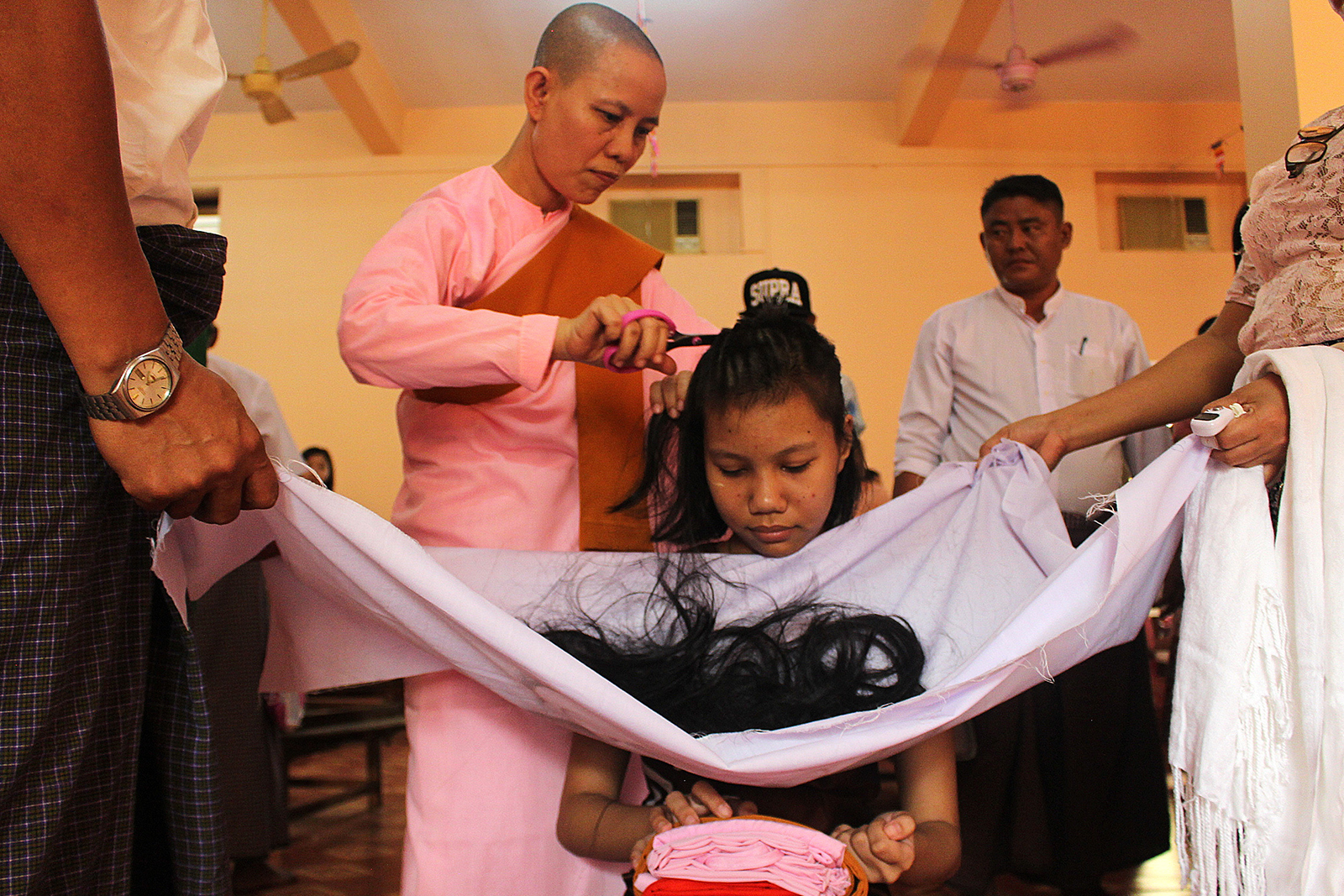 A young woman gets her cut during Thingyan, the Buddhist New Year. 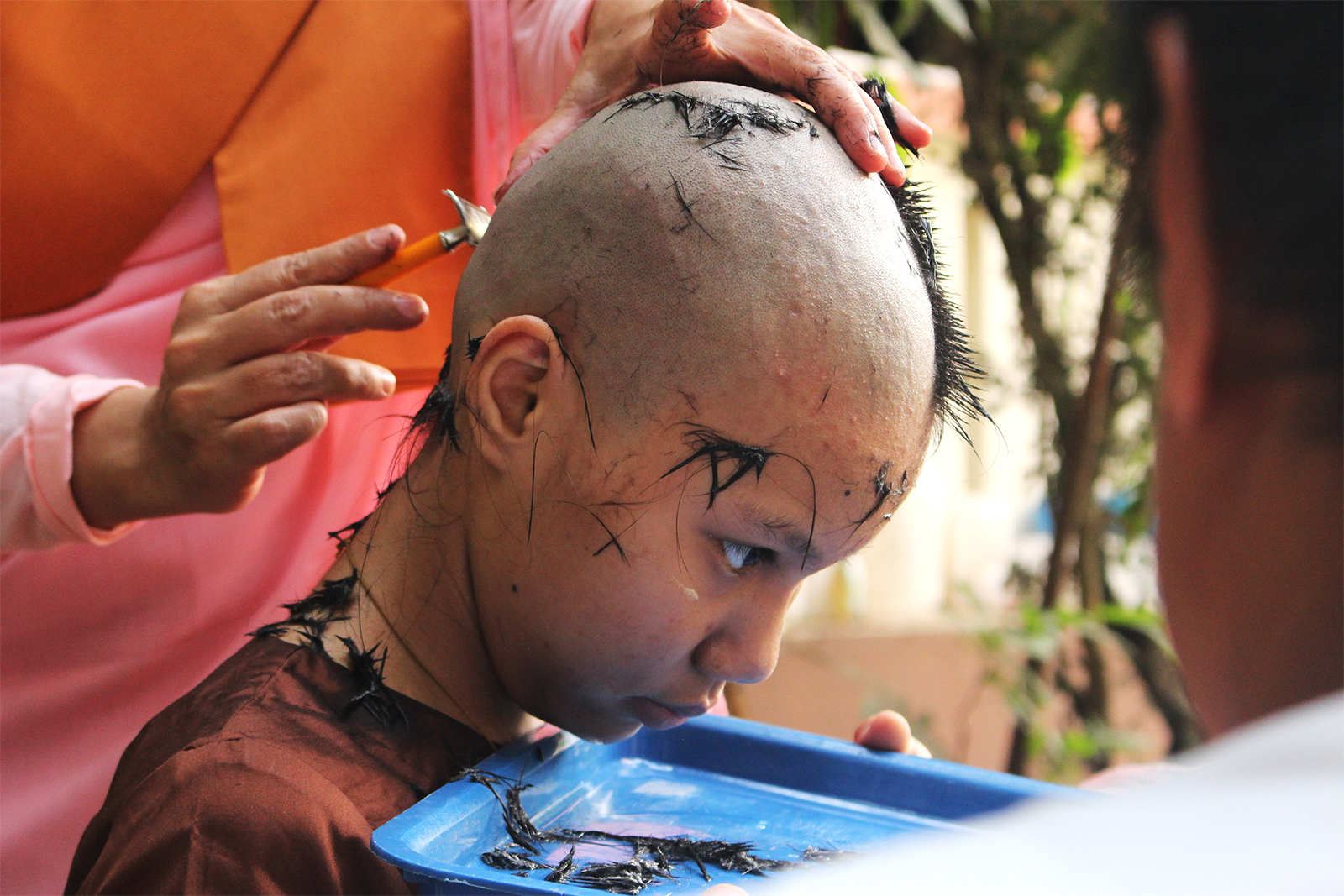 May Thet Chayay, 12, has her hair shaved after choosing to spend a short period of time as a Buddhist nun.

Traders in Yangon and Mandalay, a city in the north of Myanmar where hair sorting is big business, worry that demand is outstripping supply.

“Before, I could just collect the hair myself from women in the city, but now I need to buy more hair from Bangladesh and other countries to mix with Myanmar hair,” said Htay Win, a hair merchant in Mandalay who has been in the industry for seven years.

Htay Win is confident that the market will keep booming, although he is concerned about the shortage of good-quality hair. “It is getting harder and harder to buy long enough hair of 50 inches, because women are now choosing to cut their hair shorter and shorter.”

He adds that the quest to find virgin or untreated hair is also becoming more challenging. “Women now are dyeing their hair, which affects the price.”

Htay Win also collects small amounts of hairballs and strands from combs. This mishmash is not as valuable as cut hair, as it has to be untangled, brushed, washed, dried, conditioned and brushed once more until it shines.

Tarlo says that traders in India and China, the main two processing centers of the hair trade are located, are also expressing anxiety about supplies drying up. But she adds that the trade is not likely to collapse anytime soon, given Myanmar’s close proximity to the two and its relative poverty.

“People are getting wealthier, trendier, more concerned with their appearances and so forth,” she said. However, “when you look at historical sources, you find that even in the 19th century, hair collectors were always complaining that hair supplies were running out.”

Edited and produced by Katie Hunt in Hong Kong.