He’s campaigning for governor of Georgia on a ‘deportation bus’

It’s the kind of message you don’t expect to see on a US election campaign bus: “FOLLOW ME TO MEXICO.”

Those are the words on the back door of a repainted school bus Michael Williams is using to drum up support in his bid for the Georgia governor’s seat. He’s dubbed it the “Deportation Bus” and says it’s a show of support for the Trump administration’s crackdown on illegal immigration.

In a press release Tuesday, Williams said his message is simple: shining a light on what he claims are “the dangers of sanctuary cities and the overwhelming problem of illegal immigration.”

In a campaign ad and a press release unveiling the bus, Williams said he aims to have every city in Georgia participate in 287(g), the federal program that allows local police and sheriffs to cooperate with the feds on immigration enforcement.

“We are going to implement my 287(g) deportation plan. That’s going to fill this bus with illegals, to send them back to where they came from.” Williams says.

A number of local governments in Georgia already participate in the program.

Williams says he plans to use the bus to visit sanctuary cities and help spread his message. State legislators in Georgia passed a law banning sanctuary cities in 2009, but some local governments in the state have policies that are more sympathetic to immigrants.

So-called sanctuary cities, local governments that limit cooperation with the feds on immigration, have become a lightning rod in the immigration debate. Supporters argue they protect the rights of residents who are valuable contributors to a community. Critics have argued that approach puts public safety at risk.

Williams is running on the Republican ticket in the upcoming primary election, but he isn’t considered a frontrunner.

That didn’t stop the ad from sparking a backlash from some groups as images of the bus spread online.

Marco Esparza, a host on La Raza, an Atlanta Spanish-language radio station, shared photos of the bus on Facebook after a listener sent them to him. The photos drew dozens of comments from people expressing outrage.

“Disgusting and racist! That is why we, as Latinos, must VOTE like never before to defend our community and DEMAND respect!” said one commenter.

Other candidates talking tough, too

In his press release, Williams claims to be “the most outspoken anti-illegal candidate in Georgia’s history.” But he’s not the only Republican running for governor of Georgia who is talking tough on immigration as a May 22 primary looms.

Secretary of State Brian Kemp recently released a commercial in which he tells voters that his pickup truck might come in handy.

“I got a big truck, just in case I need to round up criminal illegals and take them home myself,” he says. 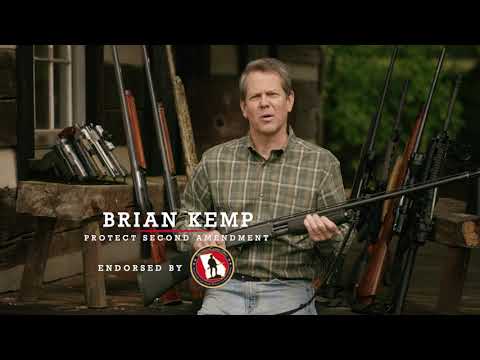 And Lieutenant Governor Casey Cagle, an early frontrunner in the race, criticizes left-leaning politicians in a campaign ad for not enforcing stricter immigration laws.

“Liberal politicians across the country are shielding criminal illegal aliens and making it possible for them to terrorize us on our streets,” Cagle says.