Chinese Uyghurs forced to welcome Communist Party into their homes

More than a million Chinese Communist officials are being dispatched to live with local families in the western region of Xinjiang, a move seen as a sign of the government’s increasingly tightened grip over the area’s predominantly Uyghur Muslim population.

The so-called “home stays,” announced by the government, target farmer households in southern Xinjiang, where the authorities have been waging an unrelenting campaign against what they call the forces of “terrorism, separatism and religious extremism.”

Government statements and state media reports show that families are required to provide detailed information during the visits on their personal lives and political views. They are also subject to “political education” from the live-in officials– whose stays are mandated to be at least one week per month in some locations. 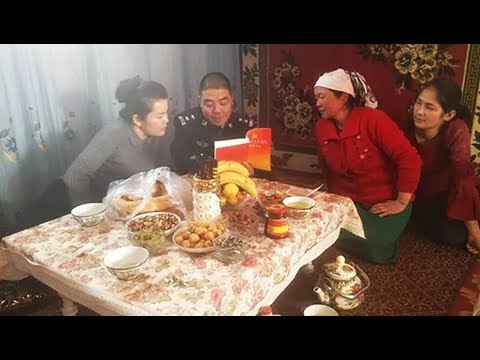 International advocacy group Human Rights Watch highlighted and condemned the government’s “home stay” program in a report released Sunday, calling it a serious violation of privacy and cultural rights of the 11 million ethnic minorities in Xinjiang.

“What can be more intrusive than forcing your way into somebody’s home, making them host you while conducting surveillance on them and saying you’re bringing benefits to them?” Maya Wang, senior China researcher at Human Rights Watch and author of the report, told CNN on Monday.

“It’s the ultimate form of surveillance – it’s a forced political indoctrination and assimilation program,” she added. “It’s both creepy and perverse.”

The “home stay” program, evolved from a government attempt that began in 2014 to have officials regularly visit and monitor people in Xinjiang, has greatly expanded since, involving 110,000 officials just two years ago to more than a million now, according to government figures.

CNN contacted the Xinjiang provincial government for comment but has not yet received a response.

Tensions have remained high in Xinjiang – a resource-rich area long inhabited by the Turkic-speaking ethnic Uyghurs and other Muslims – following a spate of violent attacks in recent years. The Chinese authorities have blamed the incidents on Muslim Uyghur separatists seeking to establish an independent state.

A Uyghur woman passes the Communist Party of China flag on a wall in Urumqi, the provincial capital of Xinjiang, in western China, June 2017.
Wang HE/Getty Images AsiaPac/Getty Images

Government statements have stressed the program’s effectiveness in resolving people’s daily and social problems such as trash collection to alcoholism.

But in a speech last December, a top Xinjiang official made clear the scheme’s “strategic importance” in “maintaining social stability and achieving lasting security,” as well as instilling the political theory of President Xi Jinping in the minds of local residents.

A local government statement online also indicated that officials must inspect the homes they are staying for any religious elements or logos – and instructed the officials to confiscate any such items found in the house.

Activists say the regional government, now led by a hardline Xi loyalist, has not only continued to arrest and imprison many Uyghurs, but also increasingly relied on both high-tech tools and mass mobilization programs to keep the population in check.

In addition to the “home stay” initiative and the political education camps, they cite examples ranging from ubiquitous surveillance cameras, to mandatory GPS tracker installation in cars and DNA collection for all residents aged 12 to 65.

Amnesty International has said Uyghurs face widespread discrimination in housing, education and employment as well as curtailed religious freedom in their homeland. Other critics have linked the rise of violence in Xinjiang to Beijing’s repressive reign there – a claim the government vehemently denies.

Over the past decades, the arrival in Xinjiang of waves of Han Chinese has also fueled ethnic tensions, despite the government’s best effort to portray an image of ethnic harmony.

Uyghur scholar on trial for 'separatism'

“We guarantee the legitimate rights and interests of all ethnicities and prohibit the discrimination and oppression against any ethnic groups,” Zhang Yijiong, a senior Communist Party official in charge of ethnic minority affairs, told reporters last October.

“The cultures, histories, languages and traditions of all ethnicities are protected and respected by national laws.”

Critics of Beijing’s Uyghur policy see a starkly different scenario in Xinjiang, as the authorities intensify their crackdown and surveillance while forced political indoctrination spreads.

“The real intention of the Chinese government is to eliminate the Uyghurs as a distinct ethnic group,” Rebiya Kadeer, a longtime exiled Uyghur leader who recently stepped down as president of the advocacy group World Uyghur Congress, told CNN in an interview in Washington last year.

“All this repression (in Xinjiang) only makes the Uyghurs hold on to their identity more firmly,” she added. “China has awakened the Uyghur people.”