Yes, Don Blankenship can win and other nuggets as Indiana, Ohio and West Virginia head to the polls

Tuesday is the largest election day of the 2018 primary season so far. Republicans are voting in two key Senate primaries in Indiana and West Virginia, which could help to determine whether they win those races in the fall. There’s also an interesting governor’s primary in Ohio that is a re-run of sorts of the 2016 Democratic presidential primary.

Let’s take a look at the marquee matchups in each of these states, starting with West Virginia.

There are three major Republican candidates vying for the chance to take on Democratic Sen. Joe Manchin in the general election. Manchin, whose approval rating in some non-gold standard polls has seemed to dip over the last year, would be considered vulnerable in pretty much any circumstance. Although incumbent senators of the opposition party rarely lose in midterms, West Virginia is a special case. President Donald Trump won the state by more than 40 points in 2016, and he continues to be quite popular in the state.

That’s why national Republicans are praying that voters don’t nominate Don Blankenship. Blankenship, a former mining executive who spent time in prison for violating mine standards at a company that had a deadly mining disaster in 2010, is seen as being electorally weak in a general election. He has been attacked by national Republicans. In turn, Blankenship has aired ads referencing “Cocaine Mitch [McConnell]” “China people” and then used the word “negro” in response to criticism about the ad. 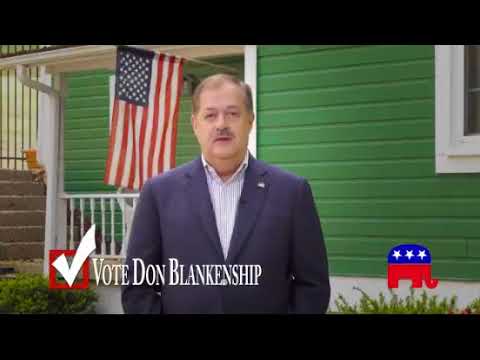 Make no mistake: Blankenship can win, though polling in the race has been limited. The only public poll in the last three weeks of the campaign, a Fox News poll, had Blankenship in third with 16% to West Virginia Attorney General Patrick Morrisey’s 21% and Congressman Evan Jenkins’ 25%. The final date that poll was in the field was 16 days before the election.

To give you an idea of how much the race could have shifted since that poll, consider how predictive primary polls have been in the past. In presidential primaries since 2000, the average poll taken 14 to 21 days before the primary has been off by a little over 9 points between where the two finishers eventually finished and polled. That’s the difference between Jenkins and Blankenship. If you were to build a 95% confidence interval in the difference between the final margin and the polls 14 to 21 days out, it has been an astounding +/- 23 percentage points. That’s far greater than the difference between any of the three candidates.

Indeed, there has been some rumblings that late internal polls from the campaigns show Blankenship surging. It’s unclear how reliable that data is, however.

If either Morrisey or Jenkins ends up winning, Republicans will be in their best position to control both Senate seats from West Virginia since the 1950s. If Blankenship emerges victorious, it could be a disaster for them.

A less controversial primary is occurring two states over in Indiana. There, three major Republican candidates are vying to take on vulnerable Democratic Sen. Joe Donnelly.

Donnelly won a close race for his first term back in 2012 against a flawed opponent, and Trump won the state by nearly 20 points in 2016.

The favorite to face Donnelly is businessman and former state representative Mike Braun. He’s in a three-way battle with Congressman Luke Messer and Congressman Todd Rokita. Braun has been able to cast himself, like Trump, as someone from outside of politics to help clean up the swamp.

The polling in the race has been limited. In fact, no poll (gold standard or non) has been released publicly in the last three weeks. The last poll, a non-gold standard poll that does not meet CNN’s standards from Gravis Marketing, had Braun up by double digits but with about half the electorate still undecided. In other words, it shouldn’t be surprising if Messer or Rokita end up winning.

While Messer and Rokita have faced problems in the Republican primary for being career politicians, Braun is untested in a major general election. He’s already faced charges that he exported jobs and underpaid employees, which could help to nullify attacks against Donnelly that his family business used Mexican labor. Still, Braun is certainly nowhere near as toxic in a general election as Blankenship could end up being for Republicans in West Virginia.

No public polling has tested a Braun vs. Donnelly matchup.

In some ways, the matchup is a rerun of the Hillary Clinton vs. Bernie Sanders matchup. Cordray is a former Barack Obama administration official. Kucinich has the backing of the Bernie Sanders-aligned group Our Revolution.

But as Politico’s Daniel Strauss points out, Cordray also has endorsement of Sen. Elizabeth Warren and has progressive bonafides from his days a consumer watchman. Kucinich has faced criticism for his occasional praising of Trump and for taking money from a pro-Syrian government group. (He has said he’ll give back the money.)

The polling in this race has been a little more fruitful than in Indiana and West Virginia. Cordray’s led by double-digits in some of the latest non-gold standard polling. That makes him the clear favorite. Though with two-fifths or more of the electorate still undecided and given the predictiveness of past primary polling, a Kucinich victory wouldn’t be shocking.

Either candidate would probably be an underdog in the fall. A non-gold standard SurveyUSA poll in March had Republican and Ohio Attorney General Mike DeWine leading both leading Democrats by around 10 points (with Cordray running a little better than Kucinich).

DeWine has been ahead of Ohio Lt. Gov. Mary Taylor by at least 15 points in all public polling in the Republican primary. Taylor, interestingly, has been running away from her former running mate and chief Trump critic Gov. John Kasich. It doesn’t look like it will be enough for her to win.

Republicans will also nominate a candidate to take on Democratic Sen. Sherrod Brown in the fall. Congressman Jim Renacci is heavily favored in this primary, though he trails by double-digits against Brown in public polling for the general.