Dropping in with Nairobi’s skateboarding scene

Skateboarding kicked off in west-coast America around the 1960s. Thrill-seekers would drop in on empty pools and sidewalks.

The city as the skate park has always fostered the four-wheeled counter-culture. The underpasses, shopping malls and public stairwells have long been the scene of skate kids carving up public spaces.

While the trend swept parts of Europe, North and South America and Asia about four decades ago, it took longer to get to places like Nairobi, Kenya. Until the last 10 years or so Nairobi’s urban infrastructure – featuring potholes, bumpy roads and few sidewalks – wasn’t exactly a smooth ride.

Now roads and pavements are in better shape, and with skate parks sprouting up, the skate scene has landed on its feet in the East African city – and the skateboarders are turning heads.

“When you are skating someplace, people normally stop and look because skating in Kenya is not that common,” said George Zuko, who’s part of the Kenya Skateboarding Society.

Skateboarding arrived in Kenya about a decade ago, galvanized by the spread of skateboarding videos online.

Skate videos have long been central to the scene worldwide. Platforms like Thrasher Magazine have over four million followers on Instagram, showing clips of skateboarders landing and crashing – setting a standard for aspirant skaters. 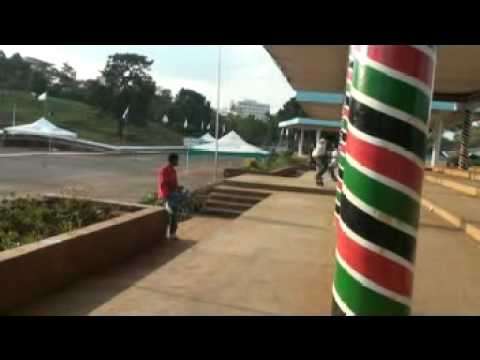 The same can be said in Kenya. “Skate videos formed a very big part and role in pushing the scene,” said Leo Kilel, a stalwart of the Kenyan skateboarding community.

The video which initially pushed skateboarding into the fore was “Play Skate.” It was the first one produced by Kenyans and inspired the community to grow.

In downtown Nairobi skateboarders weave through the streets. Around midday is the best time to skateboard. The crowds have generally dissipated which allows room to ollie onto curbs and test out new tricks.

The number of skateboarders is still small, but it’s a tight-knit community.

Lagos might seem like an unlikely place for skateboarding to take off. The megacity which boasts of an estimated population between 17 and 21 million, has no skate parks, few pavements and heavily congested roads. But WAFFLESNCREAM, a group of avid young skaters are taking to the streets to change this perception.
Amarachi Nwosu

There are also a number of longboarders in Nairobi. They tussle with the cars and motorcycles, speeding down Nairobi’s steep hills.

Abuga Aroni is one those cruising the streets. He picked it up while studying in the UK.

“You have to always stay in your lane, look out for cars and look out for pedestrians because not many people know what longboarding is so when they see you they could be very shocked,” said Aroni.

Skateboarding also provides a much-needed escape and focus for some of Nairobi’s disadvantaged youth. Some have spent time on the streets, like Ezra, 12, who’s a rising skateboarding star, and has been given a home by fellow skateboarder Zuko.

“I’ve found kids can be so creative so inspiring,” said Zuko. “When I’m at home and I’m just watching a movie and they’re like George let’s go skate.”

The rise of Nairobi’s skate scene means a desire for bigger ramps and railings. They want to push the limits of the sport.

The Shangilia Skate Park, the biggest one this side of the continent, was opened in 2013 and is now a hub for the city’s skate scene. The Kenyan skateboarding community, with the help of NGO Skate Aid, made the project a reality after many months of hard work and labor, and many tons of concrete.

There is a small but growing community of skaters in Ethiopia. 150 kids are part of community collective Ethiopia Skate. Before, skaterboarders used a parking lot in Sarbet but would have to compete with those playing soccer and parked taxis. There were also issues with street bullies. Now they have a purpose-built skate park in the neighborhood of Bisrate Gabriel.
Courtesy Sean Stromsoe for Ethiopia Skate

Africa's skateboarding scene is on the rise

The park provides a world-class skating experience, but basic skateboarding equipment can still be pricey. Local skateboarding manufacturers have emerged, but a quality board is still relatively expensive.

Local skateboarder Sherry isn’t put off: “I skateboard because I love skateboarding. It’s like loving your boyfriend. I’ll say skateboarding is my bae.”