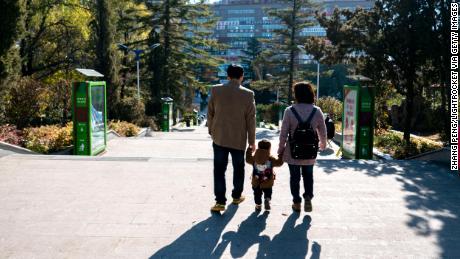 Young parents take their only kid's hand walking on the road.

Beijing (CNN)Xi Xiaoxin, 35, never thought that she would have trouble conceiving three years ago.

Back then, all she wanted was to enjoy traveling the world with her husband, whom she married in 2012. But when she came around to the idea of starting a family three years later, the road to conception turned out to be rough.
"Not until recent years did I realize that it could be so difficult getting a baby," she said.
Xi is one of hundreds of thousands of largely urban Chinese women struggling with infertility.
Like elsewhere in the world, delaying motherhood has become more common in China, with high costs of living, long working hours, unfriendly maternity policies and high child care costs. Some specialists also suggest that environmental factors such as pollution could also be a factor, particularly for male infertility.
Read More
Xi Xiaoxin, 35, never thought she would have trouble conceiving but has just started her first round of IVF.
But it's not just a personal struggle; it's a national one.
China's total fertility rate, at an estimated 1.6 children per woman in 2017, is similar to Canada's but below those of the United States and UK. This rate is below the 2.1 rate needed to keep the population steady, according to the CIA World Factbook.
Chinese authorities want to boost the birth rate, but its population pyramid is upside down: There's a shrinking number of workers to support an aging population.
How quickly can China come back from its one-child policy?
To turn the tide, the Chinese government is making drastic changes to its population policies, which had long focused on keeping the birth rate low. In 2015, it scrapped the decades-long one-child policy, and this year, it abolished its long-feared Family Planning Commission, which enforced the draconian one-child policy.
But this decision to allow married couples to have two children is now behind a surge in demand for fertility treatment among older women.
Xi and her husband didn't think about parenthood at all when they were younger. "Until these years ... whenever I see my aging parents, there's worry that they could be very lonely in the future with no grandchildren."
Official data on infertility in China are hard to come by. A report six years ago by the China Population Association suggested that it affected 40 million women and men. Infertility is perceived to be much less of a problem in rural areas, where people get married much younger.

Phoebe Pan runs a help group for women struggling with infertility on social media platform WeChat.
"I know so many Chinese women who are overwhelmed by so-called infertility and sterility problems," said Pan, who blogs about her experience on polycystic ovary syndrome, a hormone problem that can lead to female infertility.
She thinks age is the major cause of infertility problems among women.
Infertility: Causes, remedies and options
Adding to the problem is the stigma surrounding infertility in Chinese society. Many of the women Pan has spoke to are ashamed to talk about it with families and friends, and this in turn causes a lack of awareness among young Chinese women.
Xi has undergone three years of various infertility treatments, including taking a bitter herbal medicine for three months, three rounds of ovulation induction therapy and one laparoscopic surgery to restore displaced tissues in her uterus.
This year, she decided to try IVF treatment in a state-run infertility clinic. It costs $4,700 -- equivalent to about four months' salary in rich cities like Beijing, Shanghai and Guangzhou and a fee that's not covered by state medical insurance, Xi said.
In 2016, there were only 451 government-licensed clinics offering IVF in China.
<div cl