This is the music video the Parkland students made

The pain on their faces and in their lyrics is palpable. But the determination in their voices rings loud and clear.

“You’re not gonna knock us down

We’ll get back up again

You may have hurt us

But I promise we’ll be stronger”

It’s the chorus to “Shine,” a song written by a pair of Marjory Stoneman Douglas High drama students that’s part anthem, part rallying cry and that expresses their pain after the mass shooting at the Parkland, Florida, school that killed 17 people on Valentine’s Day.

A video to the song – composed by Sawyer Garrity, 16, and Andrea Pena, 15 – was released on Friday, and it features scenes of Stoneman Douglas students and their families helping each other heal in various ways: a hug between a father and his daughter in the school drop-off line; an art student drawing the words “Kids Lives Matter” on a project; children giving a big group hug to a school staff member as he walks a hallway.

“We’re not gonna let you win

We’re putting up a fight

You may have brought the dark

But together we will shine the light.” 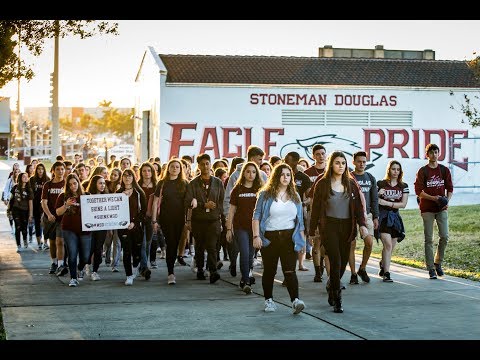 The proceeds will go toward healing

The video was produced and directed by Brittani Kagan, a 2007 graduate of the school, and all proceeds from the downloads and views of it will go to Shine MSD, a nonprofit created by Stoneman Douglas families to support programs that provide healing through the arts. Garrity and Pena’s song was also performed live at the March for Our Lives in Washington back in March.

Kagan heard the girls sing the song while visiting the school after the shooting. She was so moved by it that Kagan, who works for a digital studio in Los Angeles, promised the girls she’d do whatever she could to get their song out.

She produced the video with help from other alumni and the entertainment community in South Florida, with many people either working on the project for free or donating resources and equipment.

The video was shot at the school and at the Washington march and features nearly 100 students, including the victims’ families, who hold up pictures of their loved ones at the start of the song.

The song expresses pain and resilience

Garrity and Pena trade lyrics during the emotional tune, expressing the school’s and community’s pain, anger and agony over the mass shooting that managed to still shock a nation that’s endured too many of them.

“You, you threw my city away,

you tore down the walls

and opened up all the gates”

But the teens also spread a message of resilience, hope and unity in their song, too, vowing to not let the tragedy change who they are.

“I feel that making the music video was not only a way for us to spread the message of what our song is truly about, but also a way for us as a community and as a school to come together and heal. Everything we do is for the 17 eagles we lost,” Peña said in a statement. “Their lives shouldn’t have ended early so we do our best to make sure that their lives are never forgotten.”

After spending a couple of days in Parkland after the shooting, Kagan said she was so moved by the tragedy that she had to do something.

“Sawyer, Andrea and the rest of the students absolutely floored me with their compassion and maturity, and I knew that I had to dive into ‘Shine’ with them and make sure the music video amplified the song’s message and captured my school in an authentic, meaningful way,” she said. “The journey has been one of the most important experiences of my life.”

The video, which runs for about five minutes, ends simply but powerfully. After the song is over, the names of the 17 people killed in the shooting that day appear on screen.