For the two Native American brothers, Colorado State University was their dream school.

But when they showed up for a campus tour, a parent of another prospective student called the police on them because they apparently made her “nervous,” the school said.

Friday, the university’s police released the audio of the 911 call in which the parent reports 19-year-old Thomas Kanewakeron Gray and 17-year-old Lloyd Skanahwati Gray. She says their behavior is odd and that they’re wearing “black clothing.” The school also released footage of officers pulling the teens out of the group to question them.

Critics are holding up the incident as just the latest example of racial profiling. In the past few weeks, two African-American men were arrested for sitting in a Philadelphia Starbucks; a group of African-American women had the cops called on them at a golf course for playing too slowly; and a gym was forced to apologize after a member felt he was racially profiled and was asked to leave.

“This incident is sad and frustrating from nearly every angle, particularly the experience of two students who were here to see if this was a good fit for them as an institution,” school officials said.

They arrived a little late for the tour

The teens saved their own money to take the family’s only car and drive seven hours from New Mexico to Fort Collins, Colorado, to visit the campus Monday, their mother told reporters with CNN affiliates KOAT and KRQE.

“This was their dream school, and I wanted to give them that opportunity,” the mother, Lorraine Kahneratokwas Gray, said.

By the time they showed up, the tour had already begun.

Rashon Nelson, listens to a reporter's question alongside Donte Robinson during an interview with the Associated Press Wednesday April 18, 2018 in Philadelphia. Their arrests at a local Starbucks quickly became a viral video and galvanized people around the country who saw the incident as modern-day racism. In the week since, Nelson and Robinson have met with Starbucks CEO Kevin Johnson and are pushing for lasting changes to ensure that what happened to them doesn't happen to future patrons. They are also still processing what it means to have had an everyday encounter escalate into a police confrontation. (AP Photo/Jacqueline Larma)
Jacqueline Larma/AP

The men arrested at Starbucks are paying it forward big time

“A parent participating in the tour called campus police because she was nervous about the presence of two young men who joined the tour while it was in progress,” the school said.

Officers responded and pulled the young men aside while the tour continued without them.

When the police confirmed the brothers were part of the tour, they let them rejoin the group. But by that time, the tour had moved on, the school said.

On Friday, the university released the police report, audio of the 911 call from the nervous parent and body camera footage of officers’ interactions with the Grays.

“There are two young men that joined our tour that weren’t part of our tour,” the mother, who has not been identified, tells the dispatcher. “They’re not – definitely not – a part of the tour.”

She says the Grays’ behavior is “just really odd” and that they are wearing dark clothing with “weird symbolism or wording on it.” One of them had his hand in his sweatshirt pocket, she says, and she could tell they were lying when she asked one of them about what they wanted to study because the other started laughing.

“I think they’re Hispanic, I believe,” the mother says, when asked about whether they were white males. “One of them for sure. He said he’s from Mexico.”

The mother says she feels “ridiculous” and that she’s never called police on anyone before.

“If it’s nothing, I’m sorry,” she says. “But it actually made me like feel sick and I’ve never felt like that.” 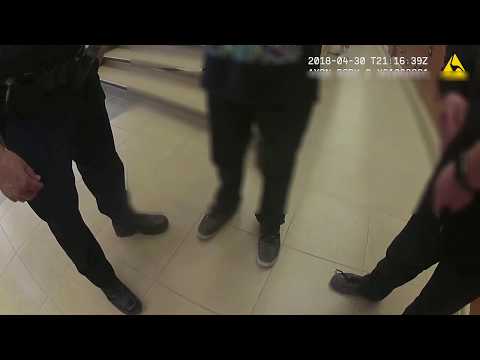 In the body camera footage, two officers approach Thomas and Lloyd, whose faces are blurred.

The officers ask whether the boys are with the group and tell them someone called because they joined the group after the tour started and they were quiet.

When asked why they didn’t respond to questions by people in the group, the boys say Lloyd is shy.

The police and the Grays make small talk while Lloyd searches through his emails to find one he received after registering for the admissions tour. When he finds it, he shows it to the officers and the boys are permitted to rejoin the group.

School says it regrets the incident

In an exhaustive statement to the school community, Colorado State University President Tony Frank said the university was trying to reach out to the Gray family but had been unsuccessful. The school would like to reimburse the boys for any travel expenses, Frank said.

“The very idea that someone – anyone – might ‘look’ like they don’t belong on a CSU Admissions tour is anathema,” Frank said, adding that anyone and everyone is welcome at the university.

“And if you’re uncomfortable with a diverse and inclusive academic environment, then you probably have a better fit elsewhere.”

Early this week, University officials reached out directly to the family of the young men & their high school. We’d like the opportunity to speak w/Ms. Gray & her sons but we have not heard back from the family. We ask them to please get in touch with us at their convenience(1/3)

We will refund any expenses they incurred traveling to CSU. We deeply regret the unwelcoming and concerning experience they had while guests on our campus (2/3)

The Office of Admissions, Office of the Vice President for Diversity, Native American Cultural Center, and CSU Police Department all are reviewing how such an incident can be avoided or handled differently in the future (3/3)

Frank noted that he was “a white man in a position of authority,” and that his status gave him privilege. He also acknowledged the uptick in racist and anti-semitic incidents on college campuses in recent years, saying, “We are, in fact, in a battle with hate within our communities.”

“There is no place for hate at Colorado State University, and we will not be silent when we see it.”

This article has been updated to correct the names of the CNN affiliates with whom the mother spoke and the photo of the campus.