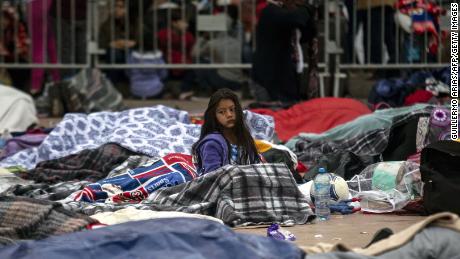 A young girl, part of the caravan of Central American asylum seekers who recently reached the US border, camps outside a port of entry in Tijuana, Mexico.

Which nationalities get rejected the most for US asylum?

(CNN)When a caravan of Central American migrants recently showed up at the US border, many wondered what their odds of getting asylum would be.

The answer: Slim, if history repeats itself.
A look at asylum denial rates show extreme variances between the nationalities of people applying.
Asylum:

A protected status that allows people fleeing persecution to live legally in another country.

And Guatemala, Honduras and El Salvador -- the three countries represented in this caravan -- have among the highest US asylum denial rates, according to Syracuse University's Transactional Records Access Clearinghouse.
But asylum seekers from Mexico and Haiti fared even worse.
Read More
On the flip side, some nationalities rarely have their asylum attempts turned down.

There's no simple answer, but there are definitely key factors.
"Country conditions always can have a big influence over whether you have legitimate grounds for asylum or not," TRAC co-director Susan B. Long said.
Another hugely important aspect is whether the asylum seeker has an attorney.
Nationalities with low denial rates for US asylum

These numbers reflect the rates of denial between FY 2012 and FY 2017.

"Without representation, the deck is stacked against an asylum seeker," TRAC said.
In fact, "your odds are five times better to get asylum if you have an attorney," Long said.
Take, for example, China. Between October 2011 and September 2017, China had the highest number of total US asylum decisions (31,176) -- and one of the lowest denial rates (20.3%).
It's no surprise that more than 95% of those Chinese applicants had attorneys.
Other nationalities with low denial rates include Egypt, Ethiopia, Syria and Burkina Faso. All had attorney representation in more than 89% percent of cases decided in that time frame.
But those who show up for crucial interviews with neither an attorney nor English skills often get denied more.
"A lot don't have the resources to pay for it," Long said. "There are a lot of attorneys trying to be of pro bono assistance, but the need is great."

Without representation, the deck is stacked against an asylum seeker."

Of course, there are many factors US officials weigh when deciding whether to grant someone asylum, such as whether they have proof of persecution or a well-founded fear of persecution due to race, religion, national origin, political opinion or membership in a particular social group.
But "(t)here are no mandatory bars to establishing a credible fear or persecution or torture," US Citizenship and Immigration Services says.
Applying for asylum in the US takes, on average, 6 months and 2 interviews

Are there any reasons you might be denied for sure?

Yes. According to the Department of Homeland Security, you may not be granted asylum if: