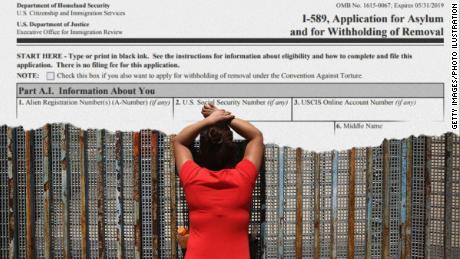 Applying for asylum in the US takes, on average, 6 months, 2 interviews and one big decision

(CNN)When we think of people coming to the United States to escape danger and persecution, we tend to think of refugees. But the caravan of Central American men, women and children currently languishing at the US-Mexico border has turned national attention to another type of endangered group: asylum seekers.

In the United States, applying for asylum is a completely different process than arriving to the country as a refugee. Asylum seekers also tend to be of different nationalities than refugees.
According to statistics from the Department of Homeland Security, China was the country with the highest number of citizens seeking asylum in the United States in 2015, followed by El Salvador, Guatemala and Egypt.
The country that had the most asylum request denied? Mexico.
So what does the asylum process look like? And to whom does it apply?
Read More

When people request asylum, they are essentially seeking protection from violence or persecution that keep them from feeling safe in their home country or keep them from returning safely to their home country. In order for someone to qualify for asylum, they must meet the definition of a "refugee" as laid out by the Immigration and Nationality Act.
And yes, there is a difference between a refugee and an asylum seeker. Refugee status is granted to people who are outside the United States. Asylum is granted to people who are either already in the country or are seeking entry and asylum at a border.

There are two paths to asylum

There are two ways to request asylum.
Since there are a lot more variables with that kind of asylum, we'll focus on the affirmative asylum process.

There's a LOT of paperwork

The most important document for asylum seekers is the I-589, the Application for Asylum and for Withholding of Removal.
It's not the longest government document ever, but the 12 pages of questions and 14 pages of instructions are understandably extensive. There are several fields that require "detailed and specific" accounts of persecution or fear of persecution, as well as requests for dates and events that could have taken place years ago. If spouses or children are to be included on the application, there's even more to provide, including photographs.
Also, if someone is newly in the United States, they may immediately run into a problem that could follow them throughout the asylum process: Providing a reliable address where they can be contacted.

... and a biometrics appointment

Once the process has begun, applicants will be scheduled for a "biometric services appointment," usually conducted at one of dozens of Application Support Centers located around the country.
Though "biometrics" sounds fairly ominous, it's actually just referring to various forms of identification related to the body. At the appointment, applicants are fingerprinted and photographed, and sign documents to verify everything they stated in their I-589.
During this period, other security measures, like background and security checks, will also be conducted.
Applicants may face challenges in getting to and from appointments. Some states have only one or two Application Support Centers, meaning applicants may have to make costly and time-consuming travel arrangements.

After the biometrics appointment comes an interview with an asylum officer. The scheduling process for this interview is actually kind of backwards: The USCIS prioritizes more recent filings to discourage people from filing for asylum for fraudulent reasons and biding their time while the proceedings drag on.
The USCIS says the window for this interview typically starts at 21 days after an application is filed. However, in early 2018 the USCIS released new guidelines that said the scheduling process may take longer because of "workload priorities related to border enforcement."
At the interview, an asylum officer will determine whether an applicant fits the definition of a refugee. Applicants are required to bring all of the documents they've racked up throughout the process, as well as things like birth certificates and marriage certificates. Some people may choose to bring a lawyer along, which is allowed. And if an applicant doesn't speak English, they need to bring their own certified translator. According to the USCIS, the interview lasts about an hour.
Again, accessibility and transportation play a critical role here. Asylum interviews are conducted at Asylum Offices, sub-offices, or at a USCIS field office. There are only eight Asylum Offices and two sub-offices in the entire country. The Chicago office, for example, services states as far away as Idaho. There are a few dozen field offices, but the availability of interview times may be limited.

After the intervew, the fate of an asylum seeker lies in the asylum officer's hands. A few other people also must sign off on the decision, including a supervisory asylum officer. According to the USCIS, the decision may come within two weeks after the asylum interview.
An approval, or "Grant of Asylum," officially gives someone asylum status and allows them to apply for things like a green card and immigration benefits. A "no" comes in the form of a "Notice of Intent to Deny," which includes a short window for appeal.

It's a months-long process

Even then, the final decision isn't always final