Giant tumbleweeds are causing giant headaches for this California town

A California town has been overrun with tumbleweeds – lots and lots of tumbleweeds.

Strong winds, with gusts topping 50 mph, have been blowing the prickly plants into neighborhoods in the High Desert town of Victorville, California. When the tumbleweeds hit an obstacle, like a fence or even a house, they start piling up.

And boy have they been piling up.

City workers were using pitchforks and heavy equipment to clean up the mess on Tuesday, but you could still see mounds of tumbleweeds that covered windows and doors and even blew onto the roofs of some houses.

“It’s an invasion, definitely,” Victorville resident Tanya Speight told CNN affiliate KABC. “Normally you get a few flying down the street or whatnot, but never this many that will stack up even this much, and this is mild compared to what it was actually in the back yard and in the front of the house. So no, it’s never been this bad.”

Tumbleweeds Take Over a Park and Homes 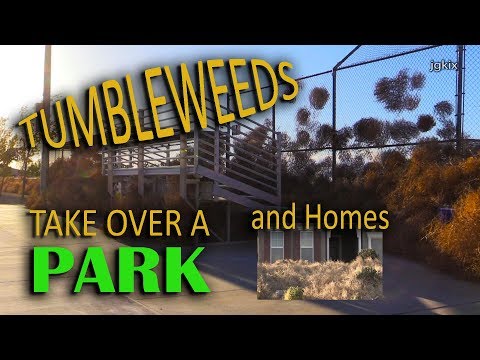 One woman told KABC that her neighbor was trapped in his home for two hours because the tumbleweeds had blocked both his front door and his garage door.

This picture courtesy of @cityofvv. Strong winds have caused tumbleweeds to pile up on Mesa Street in Victorville! Strong winds (at times gusting in excess of 50 mph) will continue in the high deserts through the evening hours. #CAwx pic.twitter.com/Hgs11t1Wfy

Tumbleweeds are an invasive annual called Russian thistle. When the plants die, their stems snap – sending the bush rolling with the wind.

The plants scatter their seeds as they tumble, so Victorville residents can look forward to more tumbleweeds next year.