That’s according to former FBI Director James Comey, who told ABC’s George Stephanopoulos that he developed a bit of an obsession with Trump’s lack of mirth after the President fired him last May.

Here’s the exchange between Comey and Stephanopoulos on the lack of laughter:

STEPHANOPOULOS: You notice something else – during that dinner. You say the President didn’t laugh.

COMEY: Yeah, not at all. And I was struck by it. So struck by it, it stayed with me, that I’ve never seen him laugh. Not in public, not in private. And at a dinner with someone – I mean, I’m not a comedian but I occasionally say something that’s funny that people chuckle with each other.

But I never saw anything that resembled a laugh. And I could over-interpret that, I could be – also, we’re missing something that – that maybe he’s – he’s breaking up in stitches with other people other than the FBI director, but I also tried – after I got fired, I thought – that stayed with me. And so I went and tried to find examples of videos where he’s laughing and I could only find that really wasn’t a genuine laugh.

This is not, at the end of the day (or even at the beginning of the day) a hugely important debate, especially when compared to other allegations Comey made in the five-hour sitdown with Stephanopoulos – including that Trump is morally unfit to be president, that he acts like a mafia boss and that it’s not impossible that he had an encounter with prostitutes in Moscow in 2013.

But, it is interesting. After all, Trump spends a decent chunk of time ridiculing the “fake news” media for its collective lack of a sense of humor. To hear Trump tell it, the humorless media doesn’t understand that he is joking about all sorts of things and, as a result, treats his jokes like actual policy statements – proof positive they are total rubes.

Among the misunderstood “jokes” that Trump has told:

For someone who “jokes” a lot – and quite clearly, based on the 2016 campaign and his rallies as president, likes to make people laugh – Trump isn’t someone who laughs much himself.

He certainly jokes. He grins, winks, puckers and preens. Trump works to get his crowds to laugh, even when he’s promising to make “them” stop laughing at us.

But how about a laugh from him – from the belly, mouth agape – a real booming, sustained cackle?

For answers, I turned to the Internet. I typed in “Donald Trump laughing” and this YouTube clip came up immediately. 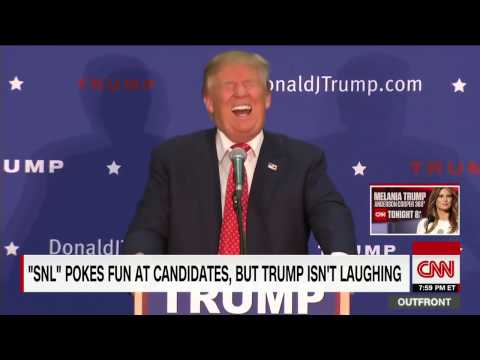 That’s definitely a laugh. A spontaneous burst of mirth. The circumstances? A loud, shrieking noise interrupts a Trump speech in New Hampshire in January 2016. He asks if it was a dog. Someone in the crowd shouts “Hillary!” Trump says “it’s Hillary” while laughing.

So, a joke about Hillary Clinton as a dog is the one documented time on the web where Trump laughs. Which, I guess, proves Comey wrong. But doesn’t make Trump look good – or particularly jocular.