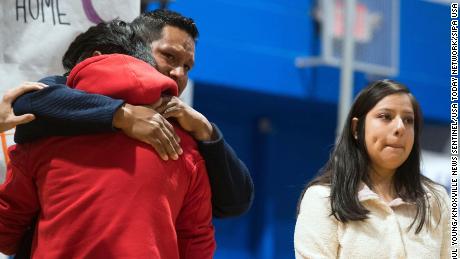 A student is comforted at a prayer vigil on Monday after talking about his mother's detention by ICE.

ICE raided a meatpacking plant. More than 500 kids missed school the next day

(CNN)Jessica Bailiff looked out at her class and saw empty desks where her students were supposed to be.

The physics teacher's heart sank. She knew why they weren't there.
The day before, federal authorities had swept through a nearby meatpacking plant, rounding up nearly 100 people they accused of being in the United States illegally.
Immigrant rights groups say last week's operation in eastern Tennessee was the largest workplace immigration raid in a decade.
More than 500 students stayed home from school the next day.
Read More
Now, a week later, most are back in class. But the community is still reeling, Bailiff says.
<div class="zn-body__paragraph" data-paragraph