President Calvin Coolidge once declared that “baseball is our national game.”

As baseball fans across the country ring in another Opening Day, here’s a look back at the special affinity between “America’s pastime” and the presidency.

President Andrew Johnson was the first to host a sports team at the White House, when he welcomed the Washington Nationals and the Brooklyn Atlantics in 1865. It has become traditional for presidents to celebrate championship-winning teams in the White House. President Donald Trump hosted the World Series-winning Houston Astros in mid-March.

On April 14, 1910, President William Howard Taft threw out the first pitch at National Stadium in Washington, DC, launching a century-long tradition, according to the White House Historical Association.

Since that time, every sitting president except Trump has thrown out at least one ceremonial first pitch.

Woodrow Wilson was the first president to attend a World Series game, when the Philadelphia Phillies played the Boston Red Sox in 1915.

Coolidge threw out the six first pitches for Washington’s home team, the Senators, and attended four World Series games – the most of any president, according to the Historical Association. He threw out first pitches in the 1924 and 1925 championship series.

His wife, Grace, was an also ardent fan of the game, and was described by Senators manager Bucky Harris as “the most rabid baseball fan I ever knew in the White House.”

Commanders in chief have used the national pastime to bring the country together in times of crisis. After the attack on Pearl Harbor, baseball commissioner Judge Kenesaw Mountain Landis wrote to President Franklin Roosevelt to ask whether the sport should be suspended during the war.

According to the Library of Congress, Roosevelt wrote back to Landis the next day, telling him, “I honestly feel that it would be best for the country to keep baseball going.”

On October 30, 2001, six weeks after the September 11 terrorist attacks, President George W. Bush threw out the first pitch – a strike– to open Game 3 of the 2001 World Series at Yankees Stadium. 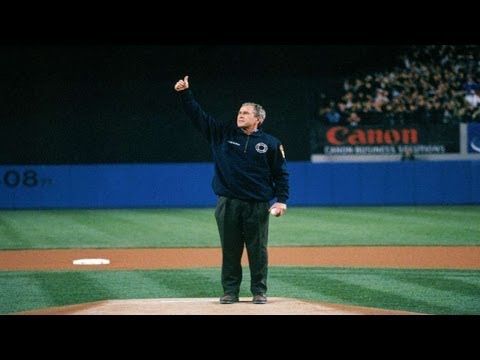