Oliver’s book, released on Sunday, a day before the Pence family released their book, is described as a “picture book about a Very Special boy bunny who falls in love with another boy bunny.”

Oliver told Ellen DeGeneres that the inspiration for his book stemmed from the release of the Pences’ book, saying the “family has written a book about their bunny, so we on top of that have released our own book about his bunny where his bunny falls in love with another male bunny.”

Oliver’s book is the No. 1 best-seller on Amazon.com as of Tuesday, which came as a surprise even to the author.

“It is?” Oliver responded with a laugh when DeGeneres told him that his book was No. 1.

He then explained that his book has actually sold out because “We were not anticipating people really buying it.”

“But they’re doing a reprint, so you can still buy it,” Oliver said. “It’ll take a few weeks.”

Pence was criticized during his time as Indiana governor for his positions on issues important to the LGBTQ community. 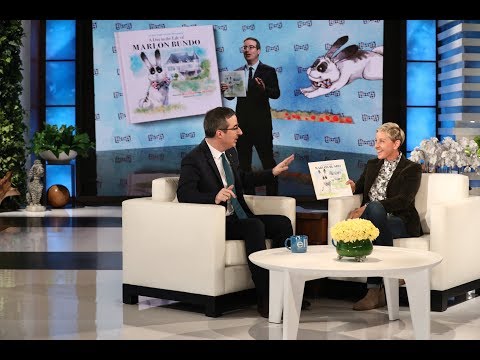 Pence’s family’s book, “Marlon Bundo’s A Day in the Life of the Vice President,” was written by the vice president’s daughter, Charlotte, and illustrated by second lady Karen Pence. Pence’s bunny book is currently at No. 4 on Amazon.

Related: John Oliver is trolling Pence with a book about a gay bunny

The proceeds of Oliver’s book will be donated to The Trevor Project and AIDS United, while the Pences will donate a portion their proceeds to A21, a nonprofit focused on combating human trafficking, and an art therapy program at Riley Hospital for Children.