It was a horrific scene: A pedestrian bridge being built to keep students safe near a busy street crashed to the ground, killing at least six people. The still-under-construction bridge near Florida International University in Miami fell yesterday afternoon, crushing vehicles and trapping people. One shocked witness said the collapse “sounded like the world was ending.” The rescue mission has now turned into a recovery effort, officials said at a pre-dawn news conference. The bridge’s main span, which weighs 950 tons, was just installed Saturday. Sen. Marco Rubio, who’s an adjunct professor at Florida International, said the bridge’s cables were being tightened when it collapsed.

Special counsel Robert Mueller has subpoenaed the Trump Organization for business documents, a source familiar with the matter told CNN. The New York Times, which first reported the development, said the subpoena included documents related to Russia. The reports mark the first publicly known time that Mueller has demanded documents related to President Donald Trump’s businesses. The subpoena is a sign that the Mueller investigation continues to pick up steam, even as Trump decries lingering questions about potential coordination between his associates and Russia and denies any wrongdoing.

Meanwhile, the Trump administration announced new sanctions against Russia. This means the White House finally did what Congress has been asking for: a crackdown on Russia for meddling in the 2016 election. The delay led to questions over Trump’s willingness to punish Moscow. By the way, Russia’s presidential election – which Vladimir Putin is all but assured of winning – is Sunday.

If Donald Trump follows through on his campaign promise to pull out of the Iran nuclear deal, one consequence could be Saudi Arabia developing its own nukes. Crown Prince Mohammed bin Salman, the kingdom’s defense chief and heir to the throne, said the Saudis don’t want nukes but will develop them if Iran does. Stopping a Middle East arms race by heading off Iran’s nuclear ambitions was one of the key arguments for the controversial deal with Iran. But the comments by Salman, who’s due at the White House next Tuesday, indicate it might happen anyway if Trump, who decertified the deal last year, scraps it.

Egypt wants answers – and action – after an Egyptian student died after being assaulted by a group of women in the British city of Nottingham. Eighteen-year-old Mariam Moustafa was attacked outside a shopping mall last month. She was in a coma for weeks and died Wednesday. A 17-year-old girl has been arrested in the case. Police said there’s nothing to suggest this was a hate crime, but they’re keeping “an open mind.” Moustafa’s death prompted outrage in Egypt, with the country’s foreign ministry and even some celebrities pressuring British authorities for answers.

Spring starts Tuesday, so we can start thinking about putting away our gloves and heavy coats (except you all in the Northeast). And when it gets here, it should be warmer than usual. In its three-month outlook, the National Oceanic and Atmospheric Administration said two-thirds of the country will be warmer than average from April to June. And it’ll be wetter than normal, too, in northern portions of the country. But before getting to all that, residents in the Northeast may need to gear up for one more nor’easter.

You don’t have to worry about Irgo the German shepherd anymore. He’s with his family in Kansas after United Airlines accidentally sent him to Japan.

What were they thinking?

Snapchat’s in trouble – again – after a tasteless ad appeared on the app that seemed to mock Chris Brown’s beating of Rihanna. RiRi was not happy.

When you’re at the highest open-air bar in the Western Hemisphere, you’ve got to order the cocktail named 1100 Feet.

Man, the French are tough. The government there fined a baker for working too much.

Who is the first black person to be featured on Canadian currency?

Play “Total Recall: The CNN news quiz,” and see if your answer is right.

Former ESPN President John Skipper, who admitted to The Hollywood Reporter that he used cocaine and abruptly left the sports network in December when a cocaine supplier tried to extort him

The number of people who have gotten salmonella from products containing the Southeast Asian plant kratom, a supplement and opioid substitute 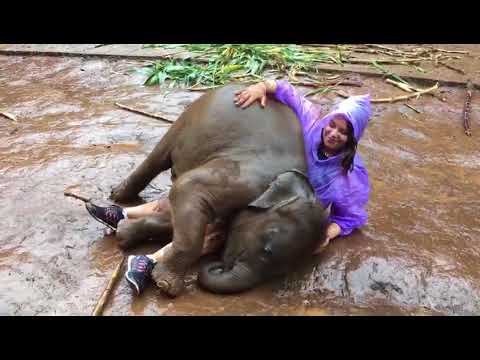 When a baby elephant cuddles up with you, it’s just like having your dog cozy up – except it’s AN ELEPHANT! (Click to view.)