Exactly a month after a gunman stormed into a Florida high school and killed 17 people, a generation shaped by gun violence will let its voices be heard. The National School Walkout, considered a memorial and a protest, will happen today at 10 a.m. local time nationwide, with students walking out of schools and universities for 17 minutes – one minute to honor each Florida victim.

Some schools are threatening students with suspension if they participate, which could hurt them when applying for college. But dozens of universities – like Harvard, Yale and MIT – say they won’t penalize applicants who take part. Some parents want their kids to walk out as well. If you’re thinking about taking part in the walkout (or you’re the parent of a student who is), we have answers here to the questions you might have.

This one’s going to go on for a little bit longer. Democrat Conor Lamb has a slight lead over Republican Rick Saccone in the special election to fill Pennsylvania’s 18th Congressional District seat. Lamb declared victory, but Saccone vows to fight on. CNN’s not projecting a winner just yet. Absentee and provisional ballots are still being counted, but CNN’s John King, after analyzing the numbers, says it’s unlikely Saccone can make up the difference.

If Lamb’s lead holds, it’s a big ole warning sign for Republicans, even in districts considered safe, ahead of the midterms this fall. President Trump won the district by 20 points in 2016, and this close race could spur other Republican officeholders to retire. While some GOP officials would pin a Saccone loss on the candidate, others have pointed the finger at Trump’s raucous rally on Saturday, which they said drove up Democratic turnout.

So, who’s next? That’s the big question one day after President Trump dumped Secretary of State Rex Tillerson (via tweet!). The President announced he will nominate CIA Director Mike Pompeo as the next top US diplomat, just ahead of the historic sit-down with North Korea’s leader. And word is, Trump will continue to embrace his “Apprentice” persona and fire national security adviser H.R. McMaster, whom he’s clashed with, and Veterans Affairs Secretary David Shulkin, whom he’s reportedly irritated with. CNN’s Stephen Collinson says Trump is building a governing team in his own image and purging restraints that have tempered his impulsive instincts. Having a hard time keeping track of everyone who’s left this administration? Don’t worry, there’s a chart for that.

Video Ad Feedback
01:36 - Source: CNN
Why you shouldn't call your boss a moron

We may find out soon how the UK retaliates against Russia after the nerve agent attack on an ex-Russian spy living in Great Britain. Prime Minister Theresa May (along with President Trump) believes the Russians are behind the poisoning of Sergei Skripal and his daughter Yulia, which left them hospitalized. The Russians ignored a midnight deadline to respond to the accusations, saying Moscow wants a sample of the substance first. So, a showdown between the countries seems likely. And all this happened a day after another Russian exile living in the UK was found dead.

Stephen Hawking may have been our era’s greatest scientist, but he became something of a pop star, too. The British theoretical physicist died at the age of 76. His life was, quite simply, remarkable. He overcame the debilitating disease ALS to publish a series of popular books probing the universe’s mysteries. He went on to become something of a cultural icon as well, with appearances on everything from “The Simpsons” to “The Big Bang Theory.”

Viola Desmond refused to give up her theater seat in 1946. Now, she’s the first black person to appear alone on Canadian currency.

When a local deputy was killed in the line of duty, this 6-year-old sold lemonade for donations – and hauled in $7,000 for the officer’s family.

The 84-year-old man complained of balance problems. Doctors could hardly believe it when they found a 3 1/2-inch pocket of air in his brain.

You’ve GOT to be kidding

A Chinese journalist on the sidelines of parliament rolled her eyes – and broke the internet.

That’s how many feet of snow fell on New England as the region dealt with its third nor’easter in less than two weeks. 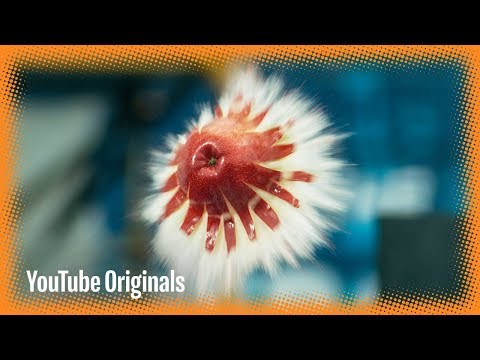 Six minutes of fruits colliding with each other – in slow motion? That’s what the Slo Mo guys are for. (Click to view.)