In a Netflix documentary, Rachel Dolezal’s son says he resents some of mom’s choices 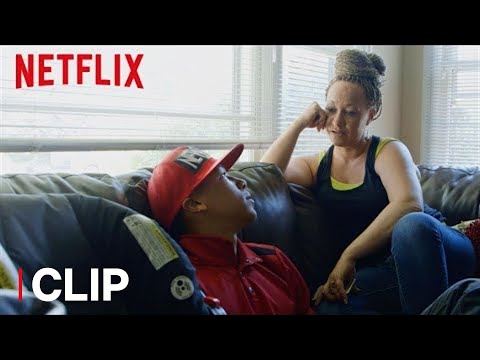 The public backlash against Rachel Dolezal has died down in the last two years, but there’s one person who wishes it would stay that way – her son.

In the trailer for his mother’s upcoming Netflix documentary, Franklin seems frustrated at her decision to step back into the spotlight.

“The more I hear about it and talk to people about it, the more it just drains me,” he says.

Dolezal made headlines in 2015 when her biological parents revealed she was born white but had been presenting herself as black for years. The scandal led her to step down from her role as the head of the Spokane, Washington, chapter of the NAACP.

Despite backlash from the public and her brother, who called her appearance a type of blackface, Dolezal maintains the view that she is a “transracial” black woman. Her case is one of many raising questions about racial fluidity.

But Dolezal’s struggle to “rebuild” through a stint on Netflix appears to be taking a toll on her two children.

“She can identify whatever she wants to because it’s her business,” Franklin says in the trailer, released on Wednesday. “But when it’s put in the limelight, I don’t think you should be pissing people off more than they already are, unless you want to be bit in the a** from it.”

He also admits that he feels resentment for the way she has expressed herself and the effect it has had on their family.

For “The Rachel Divide,” which releases on April 27, filmmaker Laura Brownson followed Dolezal for two years in an attempt to capture the aftermath of her actions.

Netflix claims that Dolezal was not paid for the documentary, according to the BBC.