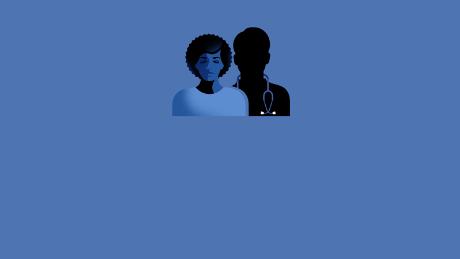 In Lesotho, women say they're finding their abortions on Facebook

Story by Rossalyn Warren, for CNN
Illustration by Nathalie Lees

Editor's Note: CNN is committed to covering gender inequality wherever it occurs in the world. This story is part of As Equals, a year-long series.
Maseru, Lesotho — Mpho opened a new chat on WhatsApp, entered an unfamiliar number, and typed a question she never thought she would have to ask.
Mpho, who asked that CNN not use her real name, didn't know who she was talking to. She found the phone number on a Facebook post while searching for "abortion pills, Lesotho" online. The person reading her messages claimed to be a doctor.
In Lesotho, a remote country home to just 2.2 million people and surrounded by South Africa, abortion is strictly illegal, apart from in life-threatening cases.
Women who have abortions in Lesotho face being outcast from their communities, or arrested.
Read More
As a result, many are driven to the anonymity of the Internet. Mpho, 27, found contact details on Facebook for several men claiming to be doctors, all hawking abortion pills.
A quick search on Facebook yields dozens of different pages and events advertising abortions, many featuring stock images of white women popping tablets, or holding their pregnant bellies. Their posts offer "safe" abortion pills. All sell the same hope to young women in Lesotho.
Facebook is by far the most popular social media network in Lesotho. The overwhelming number of ads were found on that platform, but could be on other sites too.
Facebook and WhatsApp did not respond to multiple requests for comment from CNN.
CNN spoke with nine women who had taken illegal abortion pills they sourced online. The women — aged between 17 and 30 — echoed the same story: they turned to Facebook in search of abortion services and connected with people claiming to be doctors online. Of the women who spoke to CNN, none believed their procedure was safe. All said they experienced extensive bleeding and faintness following the pills. None sought medical attention.
A spokesperson for Lesotho's Ministry of Health told CNN that illegal abortion procedures are a big problem in the country, where hospital admissions among women and girls (age 13 and older) due to abortion are 13%. And this data could be significantly underreported.
The ministry hasn't been able to determine the precise number of women who have had health complications, or died, as a result of unsafe abortion procedures, because most women don't disclose whether they've had a procedure in the first place.
"What we mostly see are women who are admitted to our health facilities with incomplete abortion(s)," Dr. Limpho Maile, a spokesperson for the Ministry of Health, said. "But without the patient disclosing that it was done illegally we cannot differentiate it from the normal patients needing this service due to miscarriages."
Maile told CNN that the Ministry of Health was not aware of any Facebook pages or events advertising abortion pills in Lesotho, but did know of advertisements for abortions in local papers.

In November 2017, five months after she had the abortion, Mpho spoke to CNN outside of a café in Maseru in a hushed whisper, fearful that someone would overhear her.
Mpho told CNN she was nervous about using social media to find abortion pills. But friends of hers, and other women she had spoken with, had previously confided in her about resorting to the same forums. The online abortion trade is an open secret for women trying to end an unwanted pregnancy in Lesotho — discussed in conversations among girlfriends and neighborhood gossip.
"I didn't trust any of the doctors," she said, recalling the conversations she had with them on WhatsApp. "They sounded like they just wanted money, and wanted to just rush me in and out. But I had no choice."
After several conversations with so-called doctors on WhatsApp, Mpho decided to meet a man she felt was more approachable than the rest. She arranged the cost of the procedure and travelled to Ladybrand, a town bordering the capital Maseru, just a short 30 minute drive north.
The supposed physician who met her in a tiny, barren back room was a stocky man, with a vaguely foreign accent, she said. He leered over her as she lay on a single bed with greying sheets; on the floor next to her sat a bucket, and placed neatly on a nearby a table was a receipt book.
"He made me take some pills, he didn't say what they were," Mpho recalled. "He then forcefully inserted two pills inside of my vagina with his hands."

"He said I should relax and made bad jokes about how it was 'nice' when I was making the baby. It was hurting — he was enjoying that."

"He said I should relax and made bad jokes about how it was 'nice' when I was making the baby. It was hurting — he was enjoying that. It was the most uncomfortable and disgusting ten minutes of my life."
After the procedure the doctor abruptly raised the price from 800 Lesotho Loti, about $67, to 1,500 Loti, about $126. Considering a woman's average annual income is just $2,258 in Lesotho, according to the World Economic Forum, it's a sum that most women would find difficult to afford.
Mpho handed him a wad of cash and left.
But, the procedure didn't work. Mpho was still pregnant.
So she tried again, this time buying pills from a man she met through a friend.
A few hours after taking the pills, she woke up on her boyfriend's bed, drenched in a pool of blood. She had been drifting in and out of consciousness all afternoon, since she'd rushed from her work at a call center, to his home in the outskirts of Maseru. By 7 p.m., after four hours, the bleeding finally stopped, but her body was cold. Her boyfriend wrapped her in blankets to stop the shivering.
"I feel as if the blood could have filled a 20 liter bucket," Mpho told CNN. "If I tried to stand for just a few minutes, I'd have collapsed. I have never bled so much, or felt so much pain, in my life."

'We can't support them, because it's illegal'

Mpho's boyfriend pleaded with her to go to the hospital. But he didn't take her. If he had, she could have been arrested.
Now they're fearful of the repercussions of what they did.
"I don't know if I'm fine now, I haven't been to the doctor yet. I'm afraid of what they may say. What if I'm damaged? What if I can never have a baby ever in the future?" Mpho said.
Religion is a big part of why abortion is taboo, and illegal, in Lesotho. According to an International Religious Freedom Report, 90% of the population identifies as Christian, and the Catholic Church remains a prominent part of the country's culture.
Mpho, and other women CNN spoke with, said that, growing up Catholic, they disagreed with abortion.
"Until you're in that situation, you don't know why people do things," Mpho said.
Women believed to have had an abortion are regularly reported to police in Lesotho. But many in the country argue that doctors providing the illegal procedures are the ones who should be criminalized. Foreign doctors, and others claiming to be medical professionals, prey on desperate women and girls in Lesotho, profiting from their abortions, according to police.
Aus Lesupi, a spokesperson for Lesotho police, says they should be prosecuted. But the rogue physicians often fall through the cracks.