‘A Wrinkle in Time’ falls short of true magic

Kids saving the world is among literature’s more durable ideas, and there’s been a whole lot of that since “A Wrinkle in Time” first published in 1962. Yet director Ava DuVernay’s splashy adaptation seldom conjures the magic to which this big-screen exercise aspires – not a complete waste of time, certainly, but too mundane to provide a consistently good one.

There’s a simplicity to Madeleine L’Engle’s book, which was previously turned into a TV movie. Expectations are raised, however, by the prospect of a Disney-backed blockbuster broadly aimed at a family audience, which might explain why this “Wrinkle” keeps swelling to a crescendo (augmented by music from “Game of Thrones” composer Ramin Djawadi), in a way that risks overwhelming its slim framework.

DuVernay made a shrewd move by enlisting Oprah Winfrey as one of her co-stars, which blesses the project with the billionaire’s coveted seal of approval as well as her marketing clout. The tradeoff, though, is that her presence accentuates the underlying message of self-empowerment and learning to love oneself, in a way that makes the movie feel a bit more like an inordinately lavish after-school special than it otherwise might.

The story centers on Meg (Storm Reid), an unhappy outcast at school, as she nears the fourth anniversary of the disappearance of her father (Chris Pine), a scientist who had been exploring grand universal forces. The pain of that loss has made Meg a handful for her mother (Gugu Mbatha-Raw), and highly protective of her younger brother Charles Wallace (an adorable Deric McCabe), a pint-sized genius with a slightly elfin streak.

A Wrinkle In Time Official US Teaser Trailer 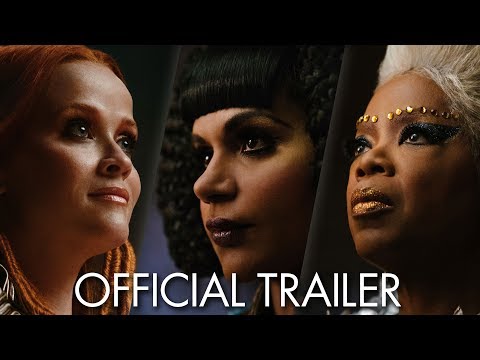 Charles Wallace pretty quickly introduces Meg to a trio of magical benefactors – played by Winfrey, a sprightly Reese Witherspoon and Mindy Kaling – who have come to recruit warriors, looking to repel The It, a shadowy evil that as described sounds like a close cousin of “Star Wars’” Dark Side of the Force. If left unchecked, Meg is warned, “darkness will fall across the universe.”

So Meg, her brother, and a hastily involved classmate, Calvin (Levi Miller), are whisked off to a fantastic realm that, alas, resembles any number of other fantastic cinematic realms we’ve seen before. Nor does it help that the ultimate battle largely plays out on what amounts to a psychic plane, leading to an encounter that generates sporadic interest visually speaking.

There is, finally, a good deal of emotion in Meg’s heroism and efforts to reunite her family, while learning to accept herself as she is. Reid is also a highly relatable young actress, who manages to alternately convey grit and vulnerability.

It’s the getting to that payoff where “A Wrinkle in Time” wanders down a few cul-de-sacs – literally, in one case, with a sequence in which the children enter a creepily Spielberg-esque neighborhood.

When the movie was announced, it was noted that DuVernay would become the first woman of color to preside over a live-action movie with a budget in excess of $100 million – a notable milestone, as Hollywood endeavors to improve representation both in front of and behind the camera.

While “A Wrinkle in Time” breaks ground off screen, there’s relatively little that feels particularly novel on it.