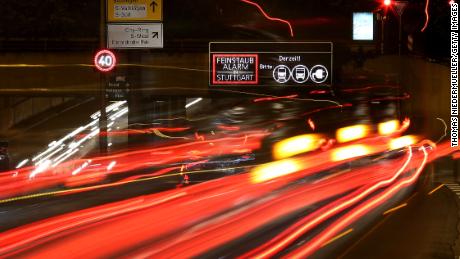 A road sign warns of high levels of particulate pollution in Stuttgart on November 15.

'We can't just stop breathing': A global scandal, made in Germany

(CNN)A piece of gray pipe hangs among the potted plants on Susanne Jallow's apartment balcony. Hidden inside the nondescript tube is a tiny computer, seven cables and a particle sensor.

In most places, the device would make for an unusual garden accessory. But it is a common sight in Stuttgart, southwest Germany, where hundreds of the gadgets hang in homes and backyards across the city.
Jallow, 55, is a lively mother of two who has lived in Stuttgart for 30 years. She uses her sensor every day to check the level of pollution -- but it's not just the numbers that tell her the air is dirty. On bad days, she can see the pollutants on the sensor itself.
"You can feel it," she told CNN last year. "When you go outside, you notice it. You get breathing problems, your throat hurts, you start being short of breath easier."
The air in Jallow's neighborhood is some of the most polluted in the country, with levels of particulate matter and nitrogen dioxide (NO2) -- both products of diesel vehicles -- often reaching dangerous levels.
Susanne Jallow got her particle sensor from Luftdaten ("air data"), a local citizens' initiative.
Read More
Last year, she and a neighbor lodged a criminal complaint against the city's mayor and district president, alleging bodily harm caused by air pollution. Jallow lost the case but hasn't stopped campaigning.
On Tuesday, Germany's highest court will decide whether diesel cars can be partially banned in German cities, including Stuttgart and Düsseldorf. Two lower courts ruled in favor of the bans last year, but the two states in which the cities are located appealed those rulings.
Jallow is eagerly awaiting the verdict, which could have far-reaching consequences for other German cities.
It's not the first time diesel is under debate in a courtroom. Since the German automaker Volkswagen was first exposed for cheating emissions tests in the United States in September 2015, hundreds of thousands of lawsuits have been launched against the company by angry owners of VW diesel cars and investors around the world.
VW admitted to illegally programming the engines in several of its diesel models to activate emission controls only during lab testing.
But outside the lab, these cars -- marketed as "clean diesel" -- were spewing out up to 40 times more nitrogen oxides (known as NOx, a group of gases that includes NO2) than the maximum allowed by US law, and up to 19 times the amount permitted in the European Union.
Several VW models marketed as "clean diesel" were later implicated in the fraud.
In the months that followed the announcement, the scale of the conspiracy -- which allegedly began in 2006 and was the subject of multiple cover-ups -- became clear.
Volkswagen said 11 million cars worldwide were fitted with software designed to cheat emissions tests. The company is facing around $30 billion in costs related to the scandal.
While two VW employees were sentenced to prison in the US in the past year, to date there have been no criminal prosecutions in Germany, the country that gave birth to the "Dieselgate" scandal.
Profits are growing, record numbers of VW cars are being sold, and last month was the company's best ever January for vehicle sales.
"There's that old adage, that crime shouldn't pay," said Michael D. Hausfeld, founder and chairman of global law firm Hausfeld, which helped secure a $15 billion settlement to compensate owners of VW vehicles in the US. "In this instance Volkswagen has basically proven that adage wrong."
Several other car manufacturers -- including Audi, Porsche (both owned by VW), Daimler and Chrysler -- are now also facing allegations from authorities in the US and Germany that they cheated emissions tests. Multiple investigations are underway and hundreds of thousands of diesel cars have been recalled.
"Volkswagen deeply regrets the behavior that gave rise to the diesel issue," spokesman Dirk Ameer told CNN in a statement. "The Volkswagen Group will leave no stone unturned to prevent violations of any laws and identify such violations as early as possible."
"We have been fully cooperating with the US authorities for more than two years and have provided comprehensive transparency," Daimler spokeswoman Ute Wüest von Vellberg said in a statement. "The authorities know the documents and no complaint has been filed."
A spokesman for Fiat Chrysler Automobiles referred CNN to a statement from last May in which the company said it would defend itself "vigorously" from any claims that it "engaged in any deliberate scheme to install defeat devices to cheat US emissions tests."
READ MORE: Why Germany has a dirty climate secret

Daniel Carder wasn't expecting to expose a scandal. When the engineer at West Virginia University took on a project in 2012 to investigate diesel emissions, it seemed like a run-of-the-mill job for a man who had spent his whole career in the diesel industry.
The goal was to find out why the same supposedly low-emission diesel engine cars being driven around the US were pumping out so many more pollutants on Europe's roads.
"We set out to show that diesels ... are a good option," Carder said.
Instead, Carder's team discovered that the low emission performance of the US vehicles was a mirage.
Gregory J. Thompson, Daniel Carder and Arvind Thiruvengadam (l to r) were part of the research team that discovered the fraud.
The discrepancies between emissions in the lab and on the road in two of the three vehicles they tested -- both Volkswagens -- were so shocking that he wondered at first if they had made a mistake.
The VW Passat and VW Jetta were emitting 20 to 40 times the amount of NOx they should be.
Companies cutting corners on emissions tests was nothing new for Carder.
"But the things that we've encountered in the past have not been at this level, this egregious," he said.
After several unsuccessful attempts by the California Air