Viola Davis is one of the most revered and decorated actresses in Hollywood, but the star of stage and screen says her paychecks and opportunities don’t necessarily reflect her esteemed position.

“I have a career that’s probably comparable to Meryl Streep, Julianne Moore, Sigourney Weaver,” Davis said at the Women in the World Los Angeles Salon on Tuesday. “They all came out of Yale. They came out of Julliard, They came out of NYU. They had the same path as me, and yet, I am nowhere near them – not as far as money, not as far as job opportunities, no where close to it.”

Davis is a two-time Tony Award winner, a Golden Globe winner, an Oscar winner and became the first black woman to win the best actress in a drama Emmy in 2015. 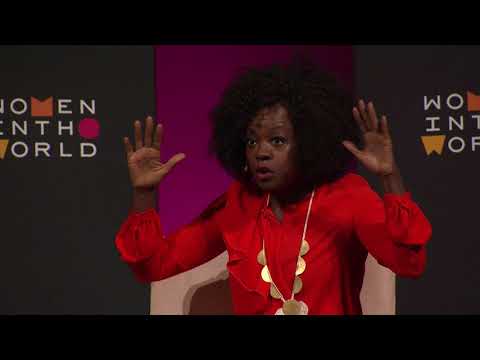 And yet, she said, “I have to constantly get on that phone” to “hustle for my worth.”

Davis estimated that actresses of color get paid “probably a tenth of what a Caucasian woman gets,” which, she also pointed out, “is half of what a man is getting paid.”

The pay disparity experienced by women and people of color in the entertainment industry is a subject being highlighted as the conversation about the gender pay equity has received renewed attention in Hollywood, thanks in part to the efforts of the Time’s Up movement.

Time’s Up is a coalition of women from the entertainment world who, on the heels of the #MeToo movement, aim to curtail sexual harassment and fight for better treatment and pay for women in in all industries.

In terms of roles, Davis said when people of color do get cast, it is often in supporting roles or as “third girl from the left.”

Other speakers at the Women in the World Los Angeles Salon, hosted by Tina Brown, included president and CEO of A+E Nancy Dubuc and actress Olivia Munn.