A new TV ad from a prominent conservative group slams Deputy Attorney General Rod Rosenstein, the Trump-appointed number two at the Justice Department, for “incompetence and abuse of power” and calls on him to “do his job or resign.”

“Rod Rosenstein, a weak careerist at the Justice Department protecting liberal Obama holdovers and the deep state instead of following the rule of law,” a narrator says in the ad, put out this week by a group connected to the Tea Party Patriots organization.

The attack ad comes as Rosenstein, a Republican and former Baltimore prosecutor, has come under fire from members of his party and the President for his involvement in the investigation into Russian interference in the 2016 election.

Rosenstein last week became a central figure in a campaign by some Republicans to discredit special counsel Robert Mueller’s investigation. He was identified in a memo by House Intelligence Chairman Devin Nunes as one of a small group of Obama and Trump administration officials who had signed off on reauthorizations for wiretaps of former Trump campaign adviser Carter Page.

Rosenstein took on oversight of Mueller’s probe in the place of Attorney General Jeff Sessions who recused himself from any investigation related to Trump’s 2016 campaign. President Donald Trump himself stoked rumors that he would fire Rosenstein or had no confidence in him in the wake of the Nunes memo, telling reporters on Friday, “you figure that one out.”

The 30-second spot from Tea Party Patriots Action, a non-profit related to the Tea Party group, cost $100,000 and will air online and in the Washington, DC, television market through the week, according to Jenny Beth Martin, the group’s founder. 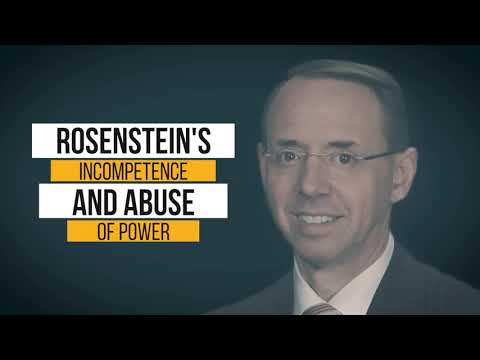 In an interview Wednesday, Martin said the ad had been in the works before the Nunes memo was released and fingered the Justice Department’s handling of past scandals, including text messages from top FBI officials who have been accused of bias and the IRS targeting of conservative groups, as its motivation.

“It’s time for people who are unelected and work for the government to remember that they are accountable to Congress,” Martin said.

“When the quote-unquote missing text messages happened a couple of weeks ago,” Martin said, referring to a series of exchanges between the two FBI officials that had been declared lost by the Justice Department, but were located days later. “We just felt like it was time to remind people, especially Rosenstein, that he has a responsibility to do his job, and if he can’t handle that, then he needs to resign.”