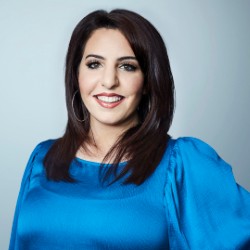 Don’t expect Cardi B — the breakout star from the Bronx — to grace the Super Bowl halftime stage anytime soon.

The Grammy-nominated rapper told TMZ Saturday night that if the National Football League asks her to perform, she would only do so “when they hire Colin Kaepernick back.”

All these football team owners talking and all lat but when is y'all going to hire Colin Kaepernick ?😠

All I want to know is... when are they going to hire Colin Kaepernick ?😒😤

The “Bodak Yellow” rapper’s comment on Super Bowl weekend comes amid a tense political climate surrounding this year’s national championship, with thousands of Americans from the left and right pledging to boycott tonight’s game between the New England Patriots and the Philadelphia Eagles.

President Donald Trump launched the NFL into a heated debate on race and patriotism in America in September when he repeatedly urged NFL owners to fire players who take a knee during the National Anthem to protest institutionalized racism.

Trump’s comments, which first came at a rally in Alabama, forced NFL owners and coaches to take sides, and that weekend swaths of players collectively took a knee during the National Anthem and locked arms on the field in a show of defiance.

At the time, Cardi and a large number of hip-hop stars slammed the NFL over the league’s perceived shunning of Kaepernick — the former San Francisco 49ers quarterback who was the first to take a knee in September 2016, launching a trend of protests on the field.

“All I want to know is … when are they going to hire Colin Kaepernick ?” Cardi tweeted two days after Trump’s comments.

“All these football team owners talking and all lat but when is y’all going to hire Colin Kaepernick,” she added.

Kaepernick filed a grievance against the NFL in October, accusing league owners of colluding against him. But in December, NFL Commissioner Roger Goodell denied that the league’s team owners conspired to ensure that Kaepernick is not signed, saying, “Teams are making the best decision for what they need, as a football team.”

Although Americans have been divided on the issue, the hip-hop community has been incredibly outspoken in their support for Kaepernick.

According to a September report by hip-hop magazine The Source, Jay-Z turned down an opportunity to perform at this year’s game, which will be headlined by Justin Timberlake.

In response to the report at the time, an NFL spokesman said, “No decisions have been made on the performer(s) and we are not going to speculate on particular artists.”

From Eminem, to Kendrick Lamar, take a look at the strongest hip-hop lyrics backing Kaepernick.