Ji Seong-ho, a North Korean man who made it out of the rogue nation and now resides in South Korea, received a standing ovation at President Donald Trump’s first State of the Union address Tuesday night.

Recognizing the guest, Trump told Ji’s story, one of a starving boy in North Korea some 20 years ago, whose limbs were run over by a train after he collapsed in exhaustion on the tracks before enduring torture at the hands of North Korean authorities.

Trump said Ji was a “witness to the ominous nature” of the authoritarian North Korean government.

Ji grew up in North Korea in the 1990s around the time when the public food distribution system in the country collapsed. As people starved to death, Ji scavenged coal to help feed his family. While collecting coal from a railroad car, he passed out and woke to find that a train had run over his limbs.

Ji has publicly spoken of hardships he faced and of the brutal punishment meted out by North Korean police when he was caught bringing rice back from China. He spoke of how he escaped North Korea at the Oslo Freedom Forum in 2015. 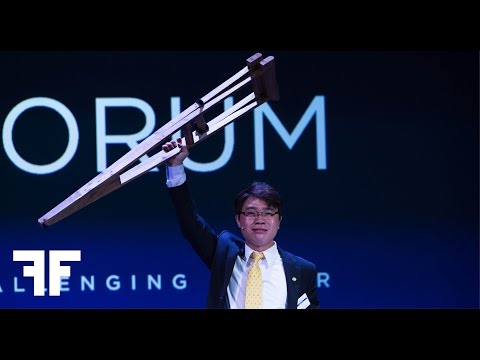 Through an underground network in 2006, Ji fled through China and other countries before arriving in South Korea. He traveled on a pair of wooden crutches he said his father had made for him.

“Seong-ho traveled thousands of miles on crutches all across China and Southeast Asia to freedom,” Trump said in his speech. “Most of his family followed. His father was caught trying to escape, and was tortured to death.”

With tears in his eyes, Ji hoisted the wooden crutches that his father made, to the thunderous applause at the State of the Union.

Trump called his story “a testament to the yearning of every human soul to live in freedom.”

Alongside Ji were Fred and Cindy Warmbier, who were reunited last year with their son Otto shortly before he died after returning from 17 months of captivity in North Korea. The Warmbiers, along with their children Austin and Greta, attended the address where Trump pledged “to honor Otto’s memory with total American resolve.”

Tensions between the United States and North Korea have ratcheted up since Trump took office, with North Korea continuing to develop its nuclear weapons and missile capability to international outrage. North Korean leader Kim Jong Un rang in the new year by appearing to extend a potential olive branch to South Korea and again threatening the US with his nuclear capability.

In his speech Tuesday, Trump said North Korea was an unparalleled oppressor and that its nuclear missiles “could very soon threaten our homeland.”

“We are waging a campaign of maximum pressure to prevent that from ever happening,” Trump said, reiterating his position to approach the issue differently than his predecessors.