The ancient Greek masterpiece etched on a tiny gemstone

A miniature gemstone discovered in a 3,500-year-old tomb is challenging our understanding of ancient Greek art. Now, nearly three years after it was originally discovered, experts are still trying to fathom how it was crafted.

The limestone-encrusted gem was one of 1,400 treasures found buried alongside a mysterious Bronze Age man – dubbed the Griffin Warrior – in Pylos, southwest Greece.

Husband-and-wife team Jack Davis and Sharon Stocker from the University of Cincinnati led the excavation near the ancient Palace of Nestor – a site mentioned in Homer’s epic poems – in 2015.

Courtesy The Department of Classics/University of Cincinnati
Sharon Stocker stands in the warrior's tomb.

Today experts are still poring over the jewels, weapons and armor, searching for clues about the ancient world at the dawn of European civilization.

One tiny object measuring just 3.6 centimeters (1.4 inches) was initially overlooked and mistaken for a bead. But, beneath the limestone was a meticulously carved gemstone, now considered one of the greatest prehistoric Greek artworks ever discovered.

It is so tiny that a microscope is needed to fully appreciate the mastery of the engraving, as some details are just half a millimeter (0.0197 inches) in size.

However, no such magnifying tool is known to have existed in the ancient Greek world.

“The amount of skill that was required to execute such an intricate design on such a small surface is unbelievable,” Stocker tells CNN.

It shows detailed understanding of the human body and movement which, until now, was thought far beyond the ability of Bronze Age artisans, she says. 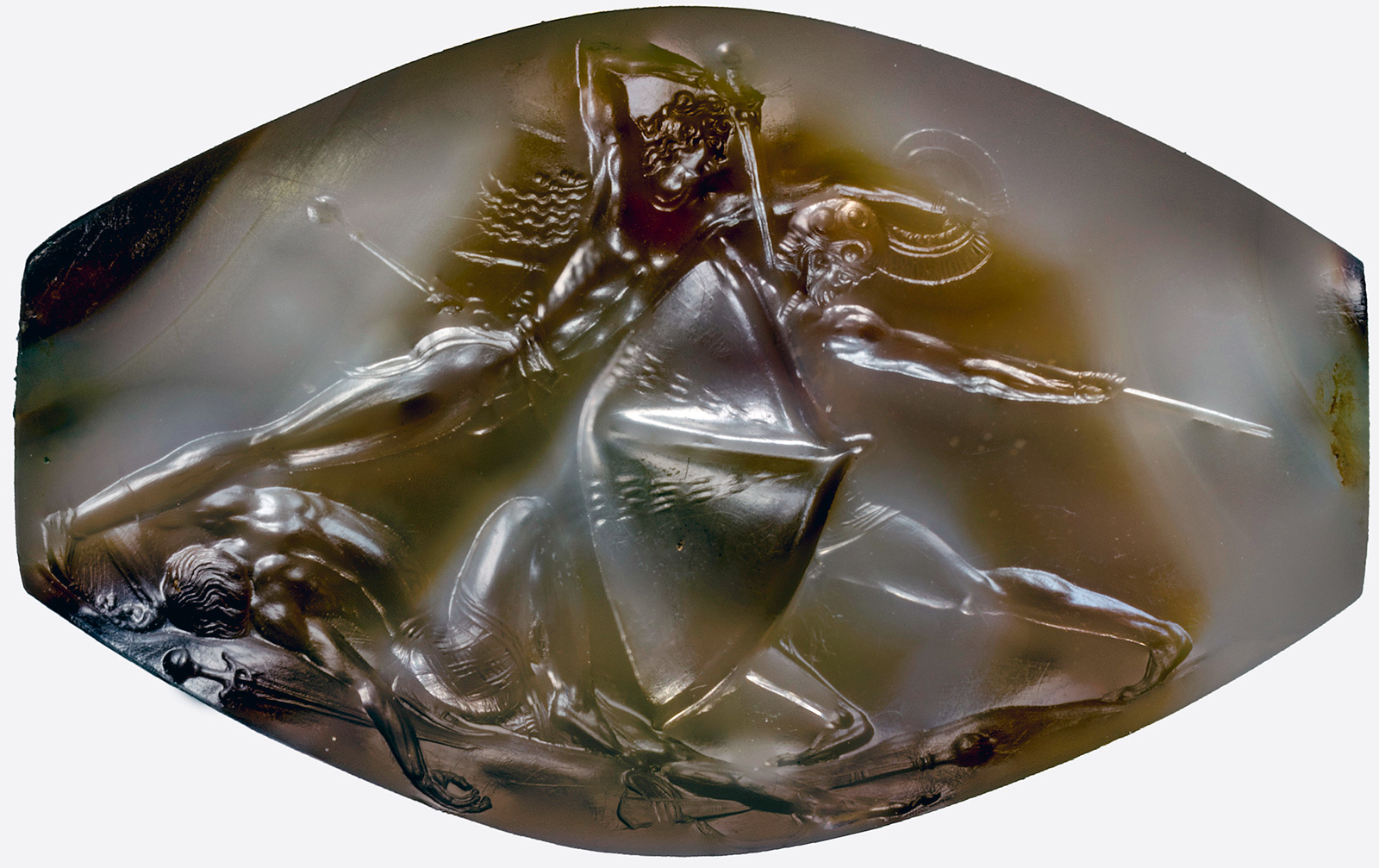 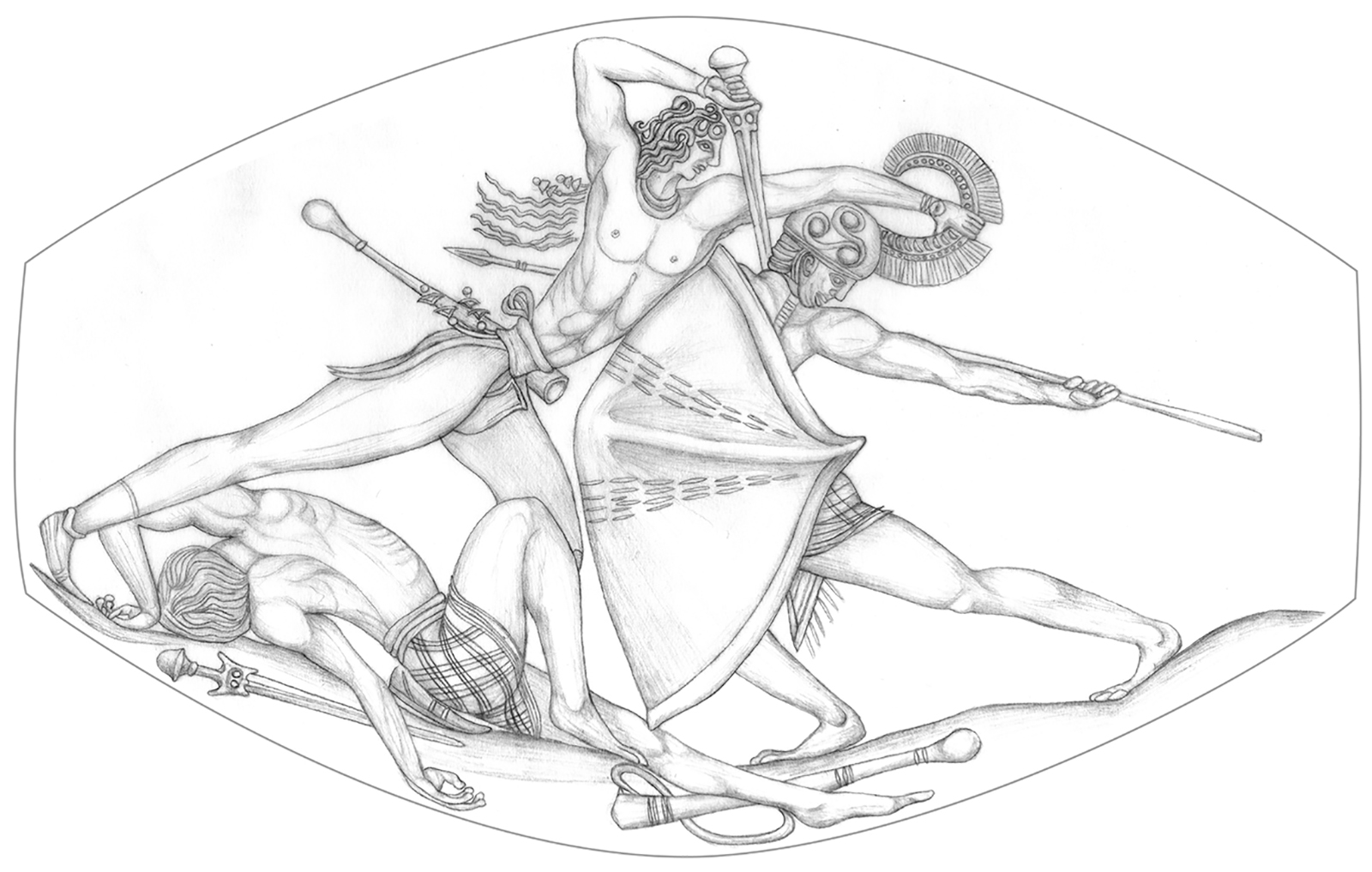 Devil in the detail

Sealstones could be stamped into clay or wax as a means of marking identity. Some were even attached to bands and worn as bracelets.

The Pylos Combat Agate depicts a dramatic scene of a near-naked warrior driving a sword into his opponent, while a third warrior lies on the ground.

“We think it references some narrative that was circulating in this period,” says Davis.

“It evokes Homer to us,” adds Stocker, referring to his epic works “Iliad” and “Odyssey,” which scholars believe were written down in the 8th century B.C. – hundreds of years after the sealstone was crafted.

While it is impossible know for sure, one theory presented by scholars speculates that the warrior image stems from earlier oral versions of Homer’s works, explains Davis.

Courtesy The Department of Classics/University of Cincinnati
Up-close photo of the fallen warrior.

Goldsmith Akis Goumas is currently attempting to replicate the stone in hard wax or burnt clay to understand the movements, shape and size of the handheld tools used.

In tracing the tool marks on the sealstone, Goumas speculates that the craftsman may have used a rotating wooden lathe with a sharp edge to engrave the stone.

He thinks one artisan did the basic, three-dimensional engraving while another completed the secondary work.

“It isn’t one craftsman’s work because we can see different qualities of dexterity in the synthesis,” he told CNN over email.