The report, “Hidden Chains: Forced Labor and Rights Abuses in Thailand’s Fishing Industry,” authored by Human Rights Watch (HRW) was released at a briefing at the European Parliament Tuesday.

It asserts that, despite the Thai government’s pronouncements to rein in human rights abuses on board Thai fishing boats, they remain widespread.

“Consumers in Europe, the US, and Japan should be confident that their seafood from Thailand didn’t involve trafficked or forced labor,” said Brad Adams, Asia director at Human Rights Watch.

“Yet, despite high profile commitments by the Thai government to clean up the fishing industry, problems are rampant.”

While the report notes that both the EU and the US have taken steps to punish the Thai government for abusive practices, Adams urged Western governments to pile pressure on Thailand to ensure that reforms are not merely window-dressing. 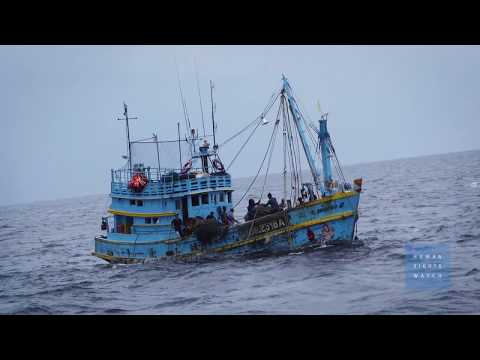 “No one should be fooled by regulations that look good on paper but are not properly enforced,” Adams said in a press release.

“The EU and US urgently need to increase pressure on Thailand to protect the rights, health, and safety of fishers.”

Mongkol Sukchararoenkana, a representative of Thailand’s National Fisheries Association, told Human Rights Watch that the industry had used illegal labor “in the past” but no longer did.

“But now things have changed completely. There is no exploitation like in the past. The consumers of the USA and Europe can eat our seafood. Everything is fine. Every problem has been fixed by the current government. The boats are correct and the workers are correct. There is no more forced labor.”

Thailand’s Ministry of Foreign Affairs released a comment on the report Thursday, stating: “The Government has implemented various legal reforms, policies, and strengthened law enforcement on labour protection as well as engaged closely with the private sector, non-governmental organizations and neighboring countries.”

“As a result, there has been significant improvement in the labour situation in the fishing industry in many areas. Disappointedly, the Report of HRW contains many outdated references… (and) does not take into consideration the current progress and efforts made by Thailand in solving labor problems.”

‘Forced and kicked’ onto boats

Fishermen, often from neighboring Myanmar and Cambodia, suffer from “poor working conditions, recruitment processes, terms of employment, and industry practices that put already vulnerable migrant workers into abusive situations – and often keep them there,” according to the report.

In a video produced to accompany the report, Nam Hak, a former fisherman from Cambodia, told HRW that he was allegedly “cheated” after being told that he’d be working in a fish canning factory.

Upon arrival in the country he, along with other duped migrant workers, was “kicked and forced” onto a fishing boat. It is not clear from his video testimony when he was taken aboard.

“Some of us had never been on a boat before,” he said. “We were scared.”

He said he contemplated escape but thought that if he tried to leave his captors “would pay people to hunt me down. They would beat me up and smash my head, then send me injured back to the boat.”

In the preparation of the report, HRW says it interviewed almost 250 current and former migrant fishermen, as well as Thai government officials, boat owners, their captains and other figures associated with the industry.

The government enacted reforms to the industry in the wake of a 2013 report by the International Labor Organization and a 2014 report by the Environmental Justice Foundation (EJF), a British-based human rights charity, plus ensuing media reports.

The Thai government responded by introducing registration documents – known locally as pink cards – for migrant workers on board fishing boats, along with instituting practices to inspect ships’ crews when leaving and returning to port.

In a press release to mark the report, HRW says that while these measures have contributed to a decline in “some of the worst abuses, such as captains killing crew members at sea,” document inspections are at best cursory and often the fishermen’s pink cards – and pay – are often withheld by a ship’s officer, meaning that their ability to move between jobs is strictly limited.

According to reports collected by the EJF some migrant fisherman said they witnessed murder, with bodies being thrown overboard as causally as unwanted catch, CNN reported in 2014.

He said that reforms instituted in 2015 allow migrant workers to switch employers. “In general, I think, employers have to treat their labor very well otherwise they will switch to other boats,” he said.

However, he added that thin resources mean that the target of checking all the country’s fishing boats – he estimates around 11,000 – would be impossible to achieve. “If we run a lot of inspections, quality will drop. And there will be a very long queue.”

“So we have set up the new system by evaluating prospect risks. For example boats which have a large amount of crew or those who had problem with labor issue before. These people will be checked a lot and more often.”

Reports by groups such as Greenpeace and the International Justice Mission (IJM) have also concluded that abuses continue, and other organizations agree that it remains an issue.

“A worker who ended up on a boat not voluntarily and who is unable to get away because there is some menace or threat – it could be physical or it could be one of these other indicators of forced labor, these are things like retention of documents, debt bondage, excessive overtime, withholding of wages, where you have those conditions, you’ve got forced labor.”

Correction: An earlier version of this story was mistakenly updated with Thailand's response to Human Rights Watch's annual report, which was released on January 18. It now includes the relevant statement.