Congress reached a bipartisan, two-year deal on spending, meaning we may not have to worry about government shutdowns for a couple of years. Here’s what’s in the agreement (and it’s a lot):

Bannon confirmed to the House Intelligence Committee that he was issued a subpoena from special counsel Robert Mueller to testify before a grand jury, according to multiple sources familiar with the matter. He was also slapped with a new subpoena on Tuesday from the committee itself. Rep. Adam Schiff, the committee’s top Democrat, said after the hearing that Bannon was instructed by the White House in advance of the hearing not to respond to certain topics.

Will there be a government shutdown? GOP leaders say it’s not going to happen and plan a vote on yet another short-term spending bill today to keep the lights on for a few more weeks. But Democrats won’t vote for that without a DACA deal, so the GOP will have to get this done with just Republican votes. But that’s no guarantee either. Conservative House members don’t want to kick the can down the road anymore. They feel these short-term spending fixes are hurting the military, so they may vote no, too.

Top White House staffer Rob Porter resigned after abuse allegations from his two ex-wives went public. But here’s the real shocker: Sources tell CNN that senior aides to President Trump knew about the claims for months and scrambled to protect Porter. Trump didn’t know until this week. Porter denies the allegations but quit anyway after photos of the alleged abuse got out.

Haitians will be barred from getting temporary agricultural and seasonal visas. The Department of Homeland Security is expected to kick Haiti off a list of countries eligible for the temporary permits because of “high levels of fraud and abuse and a high rate of overstaying” when the visas end. This raises eyebrows because it comes just a week after President Trump made disparaging comments about Haitian and African immigrants. And it comes after the administration’s decision to end Temporary Protected Status for 60,000 Haitians living here since the devastating 2010 Haiti earthquake. Belize and Samoa are also being removed from the visa program.

San Francisco may soon open the nation’s first legal safe injection sites in a move aimed at curbing the opioid epidemic. The city’s health department OK’d the proposal, which would provide people a safe space to consume drugs under the supervision of trained staff who can respond if there’s an overdose. There are more than 120 of the controversial facilities around the world. Philadelphia also has welcomed private organizations to set up injection sites, and Seattle and Baltimore are talking about it, too.

Kyle Stephens to Dr. Larry Nassar during his sentencing. Nassar, the former USA Gymnastics team doctor, pleaded guilty to seven counts of criminal sexual conduct. Stephens and 97 others are set to give victim statements during the sentencing hearing.

Nestle is selling its candy brands, like Butterfinger and BabyRuth, to Ferrero, the maker of Nutella, so it can concentrate on other stuff, like bottled water.

Say congrats to Kim K and Kayne. They’re the proud parents of baby No. 3. No word yet on what supercool name they’ll give her.

Out of the sky

If you’re drinking, you won’t be droning in New Jersey, now that a bill banning the operation of drones while under the influence has been signed into law.

Does he have an invisibility cloak, too?

Sen. Orrin Hatch took off his invisible glasses during that contentious Senate hearing with Homeland Security Secretary Kirstjen Nielsen and pretty much won the internet.

“We step up every single day and have been doing so for a long time. The fact that you don’t realize this means it’s time for you to step down.” 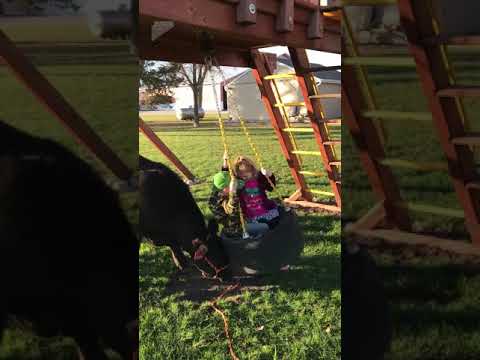 A cow pushing two kids in a tire swing is the cutest thing ever. You’re welcome. (Click to view.)