"It was literally a carpet of mud and debris everywhere," official says

The founder of a Catholic school is among the 17 people killed in deadly mudslides and flooding in Southern California. Hundreds of rescuers and dogs continued searching for people Wednesday, slogging through mud and debris.

Roy Rohter, 84, and his wife, Theresa, were swept from their Montecito home, the headmaster said. Theresa was rescued, said Michael Van Hecke, headmaster of St. Augustine Academy in Ventura, which Rohter founded in 1994.

Authorities have not confirmed the names of the dead. Children are among the victims, said Santa Barbara County fire spokesman Mike Eliason.

Heavy rains early Tuesday caused rivers of mud and debris to run down from hillsides in Santa Barbara County, demolishing homes in the affluent seaside community of Montecito weeks after wildfires in the area. Many people are on edge, awaiting news about missing loved ones. 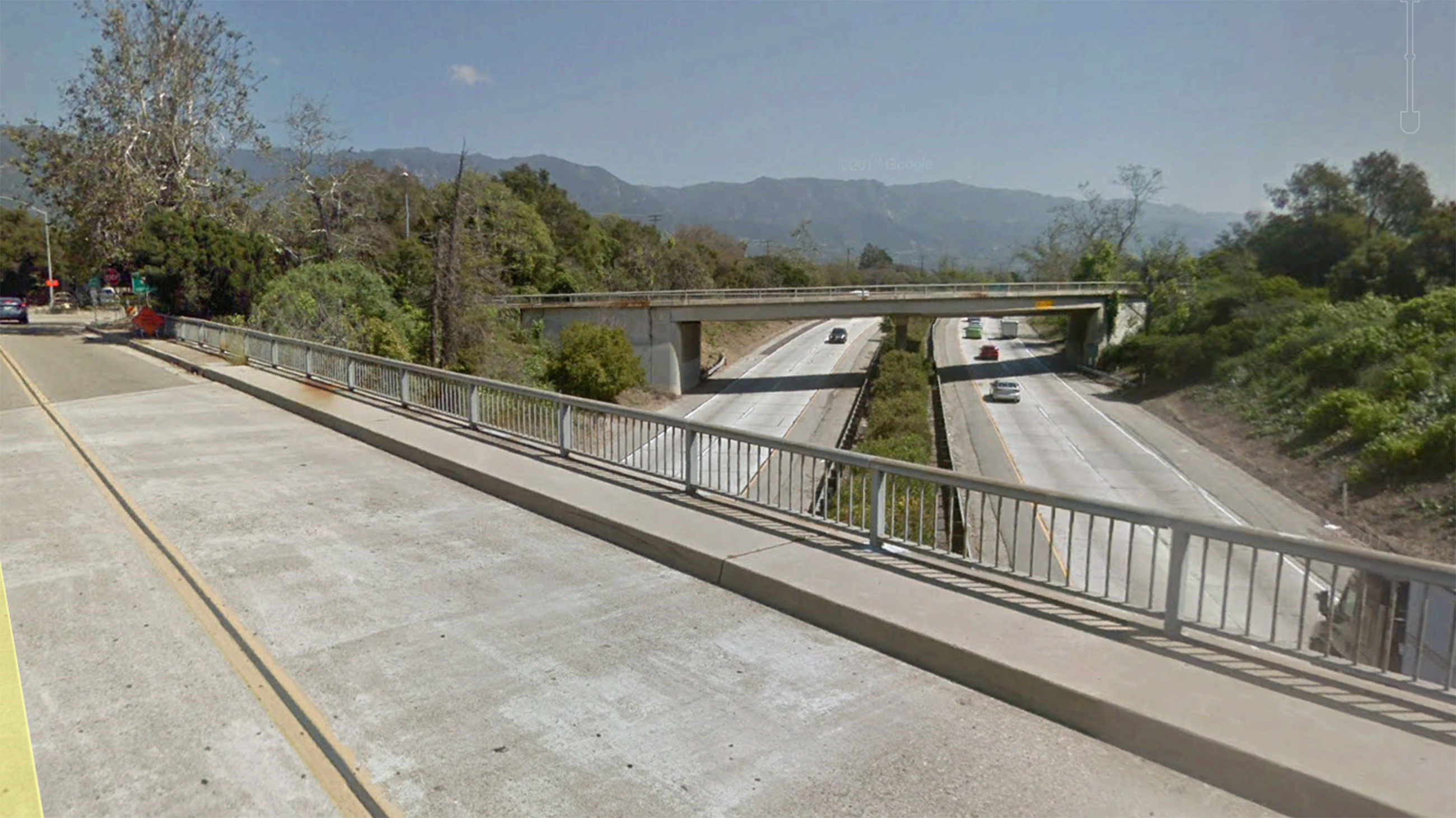 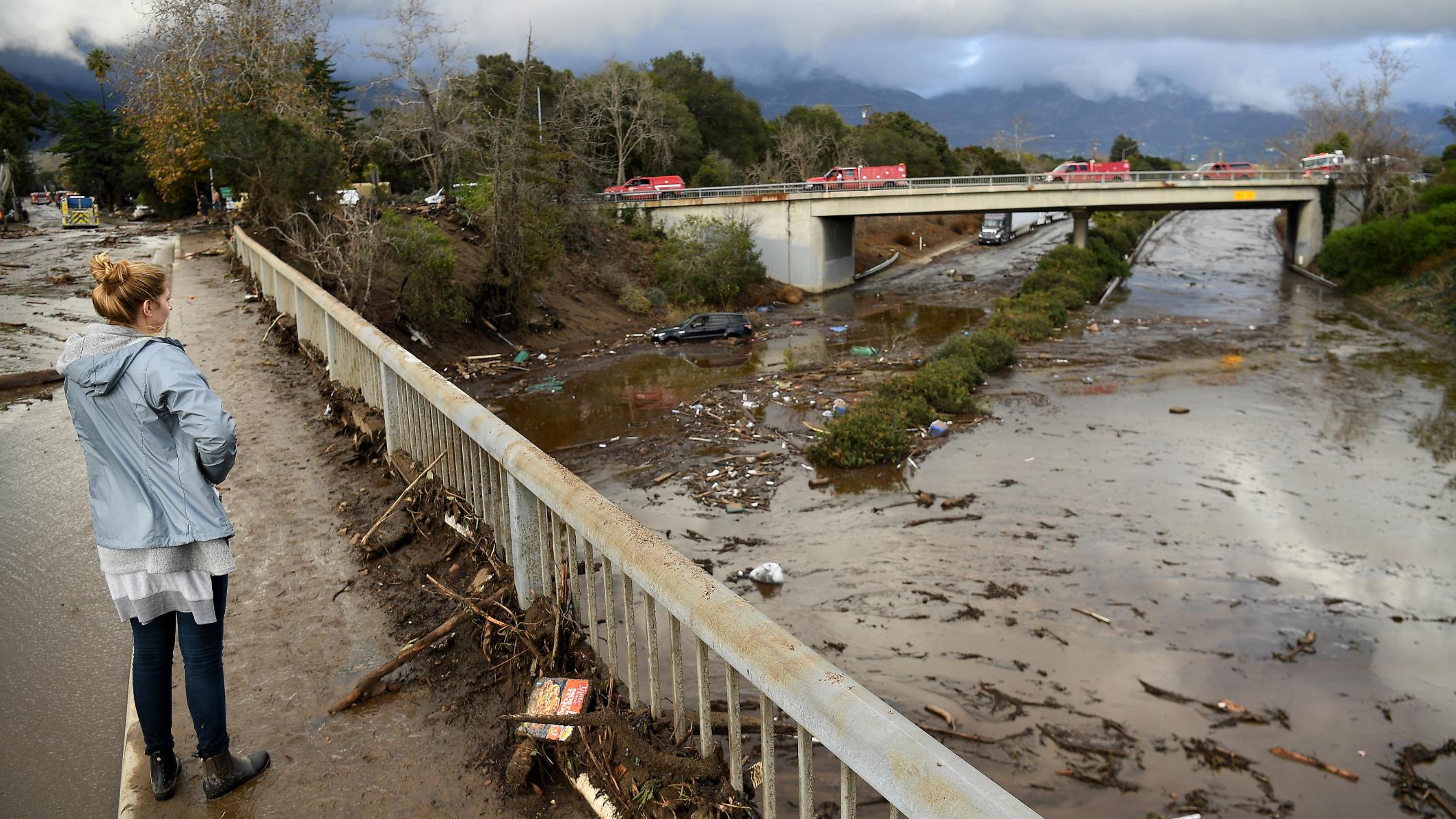 Before and after images of the 101 freeway from Olive Mill Road in Montecito.

• Rescues: Dozens of people have been rescued in Santa Barbara County, officials said. The US Coast Guard said it used helicopters Tuesday to collect people from rooftops, including a couple and their three children in Carpinteria.

A Coast Guard helicopter crew pulls a person onto a roof after mud overtook a house in Carpinteria.
U.S. Coast Guard

• Road closed: US 101 in parts of Montecito and Santa Barbara will remain closed for at least 48 hours because of the muddy debris covering it, authorities said Tuesday.

In Montecito, east of Santa Barbara, home after home is damaged or encircled by mounds of mud, furniture and fallen trees.

Diane Brewer has hopes of finding her missing friend Josie Gower, 69. Gower was at home with her boyfriend early Tuesday when a mudslide swept through the neighborhood.

“For some reason, she opened the front door” and was swept away, Brewer said.

The boyfriend also was carried away and became stuck between boulders before being rescued, Brewer said.

Brewer and others planned to search the property.

“I just want to find my friend,” Brewer said, in tears.

She added: “It was always a full a life with Josie. Now, it’s just a hole.”

Family members waited for word about their missing loved ones. Many turned to social media in their search.

James and Alice Mitchell, an elderly couple from Montecito, are among those missing, the couple’s granddaughter, Sarah Weimer, told CNN Wednesday. Weimer said her mother was in Montecito helping with the search.

Riskin began selling real estate in Los Angeles. In 1990, she moved to Montecito, where she climbed to the top of real estate industry, according to the biography on her firm’s website.

Thomas Tighe was outside his Montecito home when he heard “a deep rumbling, an ominous sound I knew was … boulders moving as the mud was rising,” he told CNN affiliate KCAL.

He saw two cars moving sideways down the middle of the street “in a river of mud.”

“There were gas mains that had popped, where you could hear the hissing,” he told the TV station.

“Power lines were down, high-voltage power lines, the large aluminum poles to hold those were snapped in half. Water was flowing out of water mains and sheared-off fire hydrants.”

These images show the mudslide devastation in California

Before the storm hit, Santa Barbara issued mandatory evacuations for 7,000 people, including in parts of Carpinteria, Montecito and Goleta, which are below areas scorched by wildfires, county spokeswoman Gina DePinto said.

“While some residents cooperated with the evacuations, many did not. Many chose to stay in place,” said Brown, the sheriff.

View from the air in Montecito. Areas that had been roadways, driveways, and homes, are now unrecognizable due to the large amount of mud and debris flows. pic.twitter.com/dbsUPw3mrL

“It was literally a carpet of mud and debris everywhere, with huge boulders, rocks, (downed) trees, power lines, wrecked cars – lots of obstacles and challenges for rescue personnel to get to homes,” Brown said.

Oprah Winfrey posted a video on social media of her trudging through the mud in the yard of her Montecito home.

“There used to a fence right here,”she said, pointing in the direction of a neighbor’s home. “My neighbor’s house, devastated.” Winfrey said debris is “everywhere.”

“Thanks everyone for your prayers and concern,” Winfrey wrote on the social media post.

She said her home had minor damage, but it pales in comparison to what her her neighbors suffered.

The debris also shut down parts of the oceanside US 101, a major thoroughfare connecting Northern and Southern California.

A stew of floodwater, mud, tree limbs and other debris covered the highway in Montecito, making it impassable. Some cars were left on the highway, mired wheel-deep in the muck.

The US 101 Freeway at the Olive Mill Road overpass flooded with runoff water from Montecito Creek. pic.twitter.com/SjaSOgOFMm

As workers clear debris to make areas accessible, more damage is revealed. Along Montecito’s Coast Village Road, the mudslide overturned trees and covered the pavement. At one spot, a car appeared to be sheared in half – its front half pointed skyward, jammed against a pile of muddy wreckage.

The remains of a car are jammed against muddy debris Tuesday in Montecito in Santa Barbara County.
CNN

More than 1 inch of rain per hour

The rainfall rate of more than 1.5 inches per hour in parts of Southern California overwhelmed the landscape.

The downpour fell in areas charred by recent wildfires, which burned vegetation that otherwise could make the terrain more resistant to mudslides.

The Thomas Fire – the largest wildfire in California’s recorded history – has burned more than 281,000 acres in Santa Barbara and Ventura counties since it began in early December. It was 92% contained, and officials don’t expect full containment until later this month.

This in front of the @FSSantaBarbara above #butterflybeach. Debris from our neighborhood no doubt. pic.twitter.com/IMa3Iypb1s

Montecito and Carpinteria are especially vulnerable to mudslides because the steep terrain in some places goes from thousands of feet above sea level to sea level in “a matter of just a few miles,” said Tom Fayram, a deputy public works director with Santa Barbara County.

Mudslides are not uncommon to the area and can be deadly.