Hargrave was called upon to speak during the public comment part of the school board meeting when she started criticizing the superintendent’s proposed raise – from $110,190 to $140,188.

“You’re making our job even more difficult,” she told the Vermilion Parish school board, according to video from CNN affiliate KATC.

“A superintendent or any person in a position of leadership getting any type of raise, I feel like it’s a slap in the face to all the teachers, cafeteria workers, and any other support staff we have.”

Hargrave was called on twice during the public session of the school board’s meeting. But KATV video shows that as she continued sharing her concerns, a city marshal hired by the school district escorted Hargrave out and handcuffed her in a hallway.

The video shows Hargrave getting handcuffed on the floor of a hallway.

“I’m am not! You just pushed me to the floor!” Hargrave yells as she’s forcibly led out of the building. “I am way smaller than you!”

Vermilion Teacher escorted out of school board meeting in handcuffs 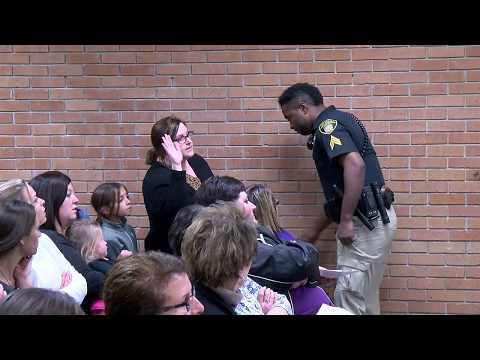 Hargrave was booked into the nearby Abbeville jail, accused of one count of resisting an officer and one count of remaining after being prohibited. She bonded out soon afterward, Abbeville police said.

It’s not clear if the marshal, hired as a resource officer to provide security, acted on his own or under the direction of a board member, KATC said. CNN has reached out to the city marshal’s office for comment.

Not all board members agree with Fontana. School board member Laura LeBeouf expressed dismay over how the teacher was treated.

“What happened here tonight – the way that females are treated in Vermilion Parish … I have never seen a man removed from this room,” LeBeouf said during the meeting.

Fontana later fired back at his fellow school board member.

In a statement, Louisiana Association of Educators President Debbie Meaux denounced the way Hargrave was treated at the meeting.

LAE was informed of the situation involving Deyshia Hargrave since shortly after the incident occurred. She is, in fact, a member of our association, and our attorney, Mr. Brian Blackwell, is working with her on next steps - he has been since Monday (1/8) evening.

But as video of Hargrave’s arrest spread around the world, the superintendent said he and his family have received death threats.

Hargrave believes her right to free speech was violated and she is considering legal action, said Brian Blackwell, attorney for the Louisiana Association of Educators.

The Louisiana Association of Educators held a rally for Hargrave on Thursday in Abbeville, where the board meeting was held. The group chanted “Stand by Deyshia” and carried signs, including one that said “Silence One #Hear Us ROAR!!”