Who is Logan Paul? Embattled YouTube star wants to be the next big thing

The name Logan Paul rocketed atop Twitter’s trending topics Tuesday morning after the YouTube star apologized for posting a video that appeared to show a body hanging from a tree in a Japanese forest infamous for suicides.

Paul’s hardly a household name, but he’s one of YouTube’s most popular vloggers, with more than 15 million subscribers to his channel. And his many videos have racked up tens of millions of views.

The 22-year-old from Westlake, Ohio, originally wanted to be an engineer, but dropped out of college to pursue entertainment full time. He got his start on Vine, Twitter’s now-defunct six-second video platform that was shut down in late 2016.

His most-watched Vine featured him appearing to dash into Los Angeles traffic to retrieve a cat from danger. It’s been “looped” over 50 million times.

Since Vine’s demise he’s mostly put his comedy videos on YouTube, Facebook and other social media platforms. He’s managed to leverage his online popularity into a budding acting career, with an appearance on “Law & Order: Special Victims Unit” in 2015, according to his profile on IMDB. He’s also had a starring role in the YouTube Red original movie “The Thinning,” and appeared in “The Space Between Us” and the upcoming “Airplane Mode,” which features a plane full of social media stars.

But his goals appear bigger. Paul says he wants to go from being a social media darling to a mainstream star.

“I want to be the biggest entertainer in the world,” he told Business Insider in 2015. “That’s my deal. I’ll do whatever it takes to get that. As many hours as is needed.”

The negative backlash to his latest video will most certainly hurt his brand.

On Monday, Paul apologized for the controversial video: “I didn’t do it for views. I get views. I did it because I thought I could make a positive ripple on the internet, not cause a monsoon of negativity.”

“I intended to raise awareness for suicide and suicide prevention and while I thought, ‘if this video saves just ONE life, it’ll be worth it,’ I was misguided by shock and awe, as portrayed in the video,” according to his statement posted on Twitter.

Paul removed the original video from YouTube, but it remains available online elsewhere. In it, Paul and his group come upon a body hanging in Japan’s Aokigahara forest, also known as the “suicide forest.” They call out to him and Paul asks someone to call the police twice.

After he sees the body, Paul says: “This is a first for me. This literally probably just happened.”

The person’s face is blurred in the video.

Someone off camera says: “I don’t feel good.”

Paul replies: “What, you never stand next to a dead guy?”

Paul bursts into laughter. “It was gonna be a joke. This was all a joke. Why did it become so real?” he asks.

“Depression and mental illnesses is not a joke,” he says. “We came here with the intent to focus on the haunted aspect of the forest. This just became very real.”

Paul and his friends gather at the parking lot. And he says to the camera that “the smiling and laughing … is not a portrayal of how I feel about the circumstances. Everyone copes with s*** differently… I cope with things with humor.”

‘I promise to be better’

Paul said that he was not monetizing the video for “obvious reasons” and gave a graphic video warning.

But that didn’t stop an online outcry by many who slammed him for appearing to joke about someone’s suicide.

“You disgust me. I can’t believe that so many young people look up to you,” “Breaking Bad” actor Aaron Paul said Monday on Twitter. “Hopefully this latest video woke them up. You are pure trash. Plain and simple. Suicide is not a joke.”

On Tuesday Paul appeared chastened by the backlash and said he was “ashamed of myself” in a video he posted to his channel. 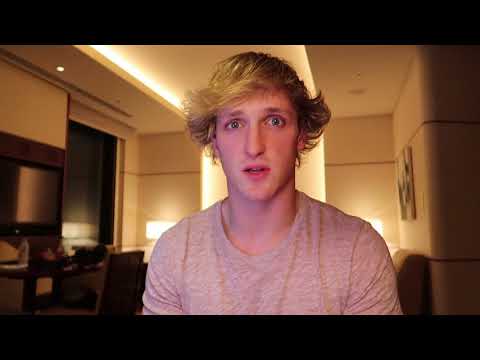 “I’m disappointed in myself and I promise to be better.”

CNN’s Madison Park and Emily Smith contributed to this article.