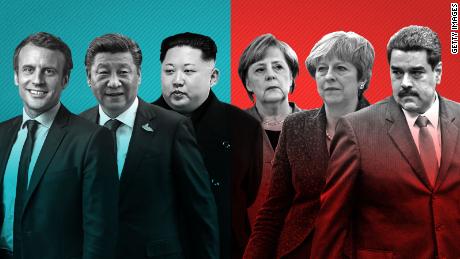 How world leaders fared in a turbulent year

(CNN)It has been a turbulent year for many leaders across the globe, and while some benefited from 2017's geopolitical twists and turns, others suffered a series of setbacks.

CNN's international correspondents give their assessments on which world leaders are up and which are down at the end of 2017, and what might be in store next year.

Emmanuel Macron won the French presidential election.
2017 was the year that made Macron. At its start, he was a former economy minister making an unlikely presidential bid. But the improbable collapse of France's two mainstream parties -- which had shared power in France for 60 years -- paved his way to victory.
The stars aligned themselves in Macron's favor on the international stage, too. Political turmoil in London, Washington and Berlin, coupled with his own ambitious vision, led Macron to be spoken of as not simply the French President, but as the new leader of the free world. The year ahead looks as though it could be more promising still.
Read More
By Melissa Bell

German Chancellor Angela Merkel has endured a difficult year.
It's been a tough year for Merkel, who first had to repair her relationship with US President Donald Trump and then tackle German elections amid a surge in right-wing populism. Despite Trump's apparent refusal to shake her hand at their first meeting, Merkel has crafted a good working relationship with him.
After that success, Merkel turned her attention to getting re-elected and seemed to be coasting to a September victory. But her party lost more than a million votes to the far-right Alternative for Germany. Merkel remains Chancellor, but she needs to get a working coalition up and running as soon as possible to meet the challenges of 2018.
By Atika Shubert

Syria's President Bashar al-Assad (L) has cemented his alliance with Russia's President Vladimir Putin.
In 2017, Assad consolidated his hold on Syria's territory, made the best use of the war against ISIS to expand his grip and weathered a brief but symbolic US air assault. He not only remains in power, but looks more likely than ever to stay there until he chooses. The post-ISIS turmoil of Iran's face-off with Saudi Arabia has reduced the prominence of Assad and his alleged war crimes in the region.
He'll have to navigate the threat of Israeli military interventions into Syria to lessen Iran's presence, but Russia's continued backing and his opponents' collapse mean his territorial grip is only going to increase.
By Nick Paton Walsh

Pope Francis (R) shakes hands with Myanmar's Aung San Suu Kyi during an event in Naypyidaw.
This year marked a fall from grace for Aung San Suu Kyi. The leader of Myanmar's elected government went from being hailed as a democratic hope for southeast Asia to being denounced as an apologist for what the United Nations and the US call ethnic cleansing.
In mid-September, after more than 400,000 Rohingya Muslims fled across Myanmar's border to Bangladesh, the Nobel Peace Prize laureate gave a speech on the crisis during which she said "we want to find out why this exodus is happening." The refugee exodus has since swelled to more than 600,000. But despite the crisis, Suu Kyi continues to enjoy fervent domestic support.
By Ivan Watson

Turkish President Recep Tayyip Erdogan gestures amid confetti during a rally in Istanbul.
Erdogan always wanted to turn Turkey's government into a strong presidential system and 2017 delivered, as he won sweeping changes to the constitution in a referendum. After 14 years in office, he remains a singularly polarizing figure, jailing journalists and overseeing a massive purge of civil servants. But he has made maneuvers that guarantee Turkey a seat at the table in regional crises.
In 2018, Erdogan will have to contend with a corruption scandal at home and regional uncertainty abroad. But with a weak opposition, Erdogan will continue to chart the course of Turkey's modern history.
By Gul Tuysuz

Russian President Vladimir Putin will run for re-election in 2018.
Putin remains extremely popular at home and is poised to win re-election as Russian president in March 2018.
But he has faced a stagnating economy and a humiliating Olympic ban over state-sponsored doping of Russian athletes.
2017 also saw Putin's hopes dashed of a better relationship with the US under Trump and, amid allegations of election meddling, US sanctions on Russia have intensified.
But it's in the Middle East that Putin has scored a major victory on the international stage, propping up his ally in Syria, Assad, securing a Russian military presence in the region and bolstering his country's status as a power broker.
By Matthew Chance