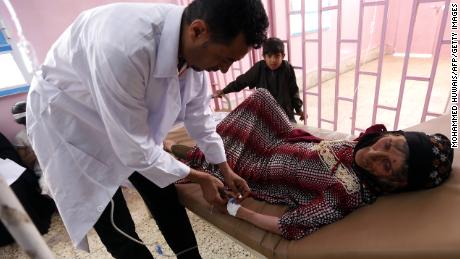 A Yemeni woman suspected of being infected with cholera, receives treatment at a hospital in the capital Sanaa, in August.

(CNN)It had already become the world's biggest cholera outbreak in recent history, but now the number of suspected cholera cases in Yemen since April has hit 1 million, and at an incredibly fast speed.

The International Committee of the Red Cross announced the record Thursday on its official Twitter account Thursday, describing it as "shocking."
"More than 80% of the population lack food, fuel, clean water and access to health care," it said, pointing to some of the underlying causes of the disease.
Cholera is an acute diarrheal illness that kills thousands of people worldwide each year. It is easily transmitted, by consuming food or water contaminated with the fecal bacteria Vibrio cholerae.
Yemen's civil war that began in 2015 has left millions of people on the brink of famine, and as clean drinking water becomes harder to find, cholera has spread through communities.
Read More
While the rate of cholera contraction is beginning to slow in Yemen, doctors are concerned the reprieve will be short, and fear the onset of diphtheria, another disease that can be deadly, especially for children.
A rapid response by nongovernmental organizations has meant that, although 2,227 people so far have died, according to the WHO, the survival rate has been relatively high.
Here's how Yemen compares to other notable cholera outbreaks in recent decades: