The President is the law, according to Donald Trump’s personal attorney, John Dowd.

The “President cannot obstruct justice because he is the chief law enforcement officer under [the Constitution’s Article II] and has every right to express his view of any case,” Dowd told Axios’ Mike Allen on Monday.

For most people, Dowd’s pronouncement echoed President Richard Nixon’s infamous assertion to British interviewer David Frost that “when the President does it, that means that it is not illegal.”

For me, it sounded a lot like Sly Stallone’s pronouncement in “Judge Dredd”: “I am the law!”

Judge Dredd - I AM THE LAW 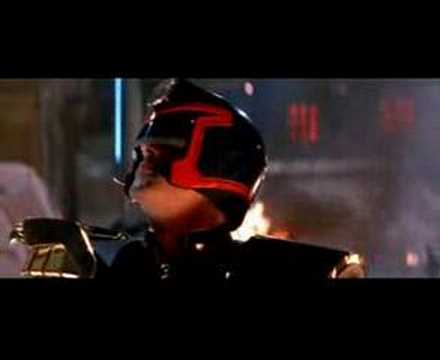 The mid-90s movie, based on a British comic book character, goes something like this: In a futuristic dystopian society, the police and the judicial system are fused. These “judges” function as judge, jury and executioner. The system works great until – wait for it – the absolute power that the judges possess comes back to bite them. (Admit it: You NEVER saw that coming!)

The lesson from “Judge Dredd” – other than you always have to watch out for a crazy brother named Rico produced in a wild genetic experiment gone wrong – is that putting anyone above the law is a massive mistake. You can’t both credibly enforce the law and believe yourself to be above it.

Which brings me to Dowd’s argument. He may well have a legal argument to make. (Much to my mother’s chagrin, I never went to law school and am not a lawyer.) Legal scholars have debated Nixon’s it’s-not-illegal-if-the-President-does-it pronouncement for decades – and will continue to do so.

But, whether or not Nixon could have committed an illegal act as President was totally besides the point in terms of the politics of his situation. Watergate – and his complicity in it – made it impossible for Nixon to remain President. He resigned, but had he not, he would have surely been impeached by Congress.

Nixon’s arc is totally relevant to Dowd’s assertion that Trump can’t legally obstruct justice because, in the words of Judge Joseph Dredd, “I am the law.”

What Dowd is doing in this quote to Mike Allen is obvious: He is laying the groundwork for the possibility that special counsel Robert Mueller’s investigation finds that Trump obstructed justice in his firing of FBI Diretcor James Comey amid the ongoing investigation into Russia’s attempted interference in the 2016 election.

Which, OK, I guess, legally speaking could be debated – although I imagine the fight over whether the president can obstruct justice would be a very lively one.

But, politically speaking, Dowd’s point is moot. And, the way that a President gets removed – impeachment – is a political process, not a legal one.

There is simply no way that if Mueller concluded that Trump had obstructed justice that congressional Republicans could hang the future of their party on the legal argument Dowd is previewing with Allen.

Can you imagine a Republican senator, in the wake of an obstruction conclusion from Mueller, telling a reporter: “Well, I don’t, technically speaking, believe the President can obstruct justice”?

None of the above is to say Mueller is going to find that Trump obstructed justice. We have very little insight into Mueller’s investigation or where it might lead beyond the fact that four members of Trump’s 2016 campaign team have been charged with a variety of crimes via the special counsel’s team. (Two – Michael Flynn and George Papadopoulos – pleaded guilty to lying to the FBI about their interactions with the Russians.)

But, if the Dowd argument ever does see the light of day, it has an almost 0% chance of succeeding. The politics of putting yourself above the law are a stone cold loser.