It’s all the same. There’s nothing (and no one) new. Politics. Sports. Entertainment. Once something works, it’s expected to keep working in the same or a slightly different place. If people like something once, they’ll like it again. The inertia of repetition.

Hollywood, thirsty for ideas, returns again and again to the same well. Amazon needs one thing to bind its businesses. The Lord of the Rings! No matter that the most recent six-movie franchise is still beloved and generating memes of its own.

THE LORD OF THE RINGS: FELLOWSHIP OF THE RING, Cate Blanchett, 2001
Warner Bros/everett digital

Disney, after breaking the bank to buy out George Lucas, is expanding the “Star Wars” universe at light speed. How about a surefire director to get the thing started? Put the guy who did the “Star Trek” reboot in charge of the “Star Wars” reboot. That’ll work. It did. Live-action versions of classic cartoons? Check. A new “Mary Poppins”? Check.

The legions of superheroes and their dueling universes force-fed to the moviegoing public each year? Check, check, check and check.

Want a pop music hit? Put Justin Bieber on it. He’ll sell it, whatever it is.

In sports, if your team is losing, the management will find a new coach. Except that odds are your new coach was just someone else’s coach – and some else’s before that. Football, baseball, basketball? There’s a rotating cast of people deemed qualified coaches. Joe Girardi for president? He needs a job.

Is this country out of new ideas?

When sexual harassment charges were leveled against Republican Senate candidate Roy Moore, the first thing on many people’s tongues was a write-in campaign for Luther Strange, the candidate Moore bested in the Alabama primary race. When that did little to excite anyone – successful write-in campaigns are like shooting the moon and they need a little Lisa Murkowski excitement – the next thought was Jeff Sessions, the beleaguered attorney general, whose departure to join the Trump administration caused the special election in the first place. Sessions, for what it’s worth, has said he’s not interested in returning to the Senate.

How about a Republican of pedigree and stature enough to replace Orrin Hatch, 83, the most senior Republican in the most august deliberative body in all the land?

Put a Romney in there. Not Tagg or Josh or another of the Romney boys, mind you. But Mitt Romney. The Boomer-era, 70-year-old former Massachusetts governor, Salt Lake City Olympics savior and twice-failed presidential candidate is said to be interested. Or maybe Hatch, who remains coy, will just run for re-election again.

No longer being coy about re-election is Hatch’s Democratic colleague, Dianne Feinstein, 84, who is a smidge older than him, but all in for another six-year term.

A number of California Democrats, tired of waiting for a Senate seat to open up, are challenging her – and since California has an open primary, there’s a good chance one of them will face her twice, in June and then again in November.

Whoever gets into a Senate or House seat has a good chance of staying there for a while. Re-election rates in 2016 were over 90% in both the House and Senate. That could change next year if there’s the anti-Trump wave Democrats are hoping for. But even in wave years when power changes hands – 2010, 2006 and 1994, for instance – re-election rates for specific members approach 90%.

Want an alternative to Hillary Clinton? A Democrat who can beat Donald Trump in 2020? Joe Biden might have an idea for you. And his name might well be Joe Biden. It’d be his third – count ‘em: one, two, three – run for president. He’d have Hillary Clinton, who ran only twice, beat in that category. But Biden must be itching for a return to office. He was either a senator or vice president for 44 years until he left office in January.

“Saturday Night Live” put its own spin on this last week, throwing Bernie Sanders and the potential for his repeat candidacy into the mix. The idea, borne out in most elections, is that people will vote for the name they know, even if it isn’t their favorite name.

Message from the DNC - SNL 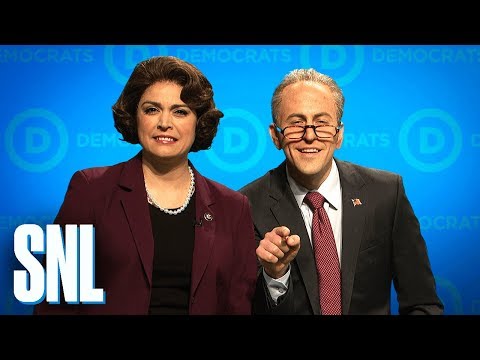 But if you add up all of the Clintons’ runs – Bill’s and Hillary’s – they’d have Biden beat at four.

That’s nothing on the Bushes. There’s been a Bush on some kind of ballot in every presidential election but three since 1980, when George H.W. Bush first ran and was ultimately picked as Ronald Reagan’s vice president. The only presidential race without a Bush or Clinton on a primary or general election ballot since 1980 was in Obama’s re-election in 2012. Americans have had a remarkably consistent, if that’s the word for it, group of choices for decades.

Why would Democrats want a new leader in the House? Nancy Pelosi raises scads of campaign cash. But only an anti-Trump wave might give her back the speaker’s gavel eight years after she lost it.

That’s part of why it was so shocking when a new name broke through. Though Trump was so known in US culture that he was hardly a fresh face when he defeated both a Bush and a Clinton.

And as far as a write-in campaign like one discussed earlier, you’d need someone with such deep name recognition for it to work. Lisa Murkowski, the Alaska senator who achieved that Triple Lindy achievement of winning a statewide write-in campaign in 2010 after losing a tough Republican primary, was not a new name.

This is part of what Trump promised to end with his inaugural address, a broadside in which he declared war on the establishment:

Trump: Power coming back to the people

“For too long, a small group in our nation’s capital has reaped the rewards of government while the people have borne the cost.

“Washington flourished – but the people did not share in its wealth.

“Politicians prospered – but the jobs left, and the factories closed.

“The establishment protected itself, but not the citizens of our country.

It’s a war that Trump has had trouble following through on; he needs to work with the Capitol Hill establishment, embodied by Senate Majority Leader Mitch McConnell, in order to get anything done, although their efforts so far have been confounded by a united slate of Democrats and feuding factions of Republicans.

His first real scalp was that of Luther Strange, the handpicked establishment favorite in Alabama.

But even the insurgent faces can start to look the same. Why did Strange have so much trouble against Moore in the first place? Moore’s name has been prominent in Alabama for decades as he’s courted controversy in his career as a fire-and-brimstone judge pushing the Ten Commandments into public spaces or saying controversial things about homosexuality. Fake news? Nope. More like the same old story.

Update: Senate Majority Leader Mitch McConnell dangled the possibility of a Sessions write-in campaign Tuesday night and said he’s sure that Sessions and President Trump are considering the idea.

Here’s the full McConnell comment, in which he also talks about the importance of popularity and makes the Murkowski comparison:

“Lisa Murkowski from Alaska lost the primary, ran a write-in campaign in the general election and actually won. I think the last person to do that was Strom Thurmond in the 50s. So, why did she win? She was totally well-known and extremely popular. And the name being the most often discussed may not be available, but the Alabamian who would fit that standard would be the Attorney General, who is totally well-known and extremely popular in Alabama. That obviously would be a big move for him and for the President. As the President is winding his way back to the United States, I’m confident this is an issue they’re discussing in great detail.”